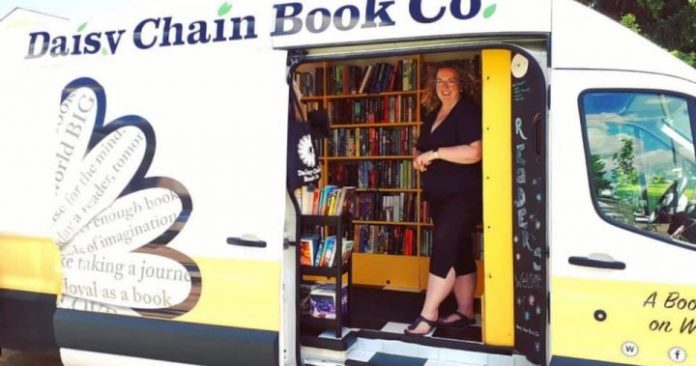 An Edmontonian has spent her last two summers on the road in a truck that’s filled top-to-bottom with books.

“I love the bookstore environment… it’s just such a great place to be,” Brandi Morpurgo, the owner of Daisy Chain Book Co., said.

Morpurgo has been the owner and operator of Daisy Chain Book Co. since it launched as a mobile bookstore in late summer 2018.

She said her mobile store, which she calls a “book truck,” has caught on in Edmonton and beyond since its launch.

“The idea was something that has been growing in my imagination for so long,” Morpurgo said.

“I used to doodle it on Post-it notes and in journals. I had a social work job, a very grown-up and educated position, and I finally decided I needed to either do this idea or stop thinking about it.

“People have loved it so far. They always get that deer-in-the-headlights look when they see it.”

She said that initially, she worked with friends and family who were looking to downsize their book collection, as well as sourcing from her own massive bookshelf. But now, she also works with publishers and suppliers to keep the truck stocked.

Morpurgo added she specifically designed the truck to be more of an experience for its visitors.

“There’s a lot of people who want to take photos of it and pose inside it and just be in the space,” she said.

“It’s kind of got a retro-diner feel to it. And I play old music from the 50s and 60s, so it has kind of an old-fashioned, nostalgic theme going on.”

Where the truck will be each week is posted on the company’s website. It also visits the 124 Street Grand Market every Thursday and Sunday.

The book truck also does free deliveries city wide and orders can be placed online.

“We put all of our books on the website so you can always see what we have,” Morpurgo said. “It’s changing every couple of days.”

She said business has remained strong through COVID-19, although the shop has changed its rules slightly — only allowing one family or cohort group in at a time, with a designated entrance and exit using the back and side doors — as well as regularly sanitizing the books and truck itself.

She said she believes her truck is one of only few in Canada; it’s the only one she knows of in all Alberta.

While the book truck has only operated for deliveries over its first few winters, Morpurgo added she is working on ideas to expand the shop for all seasons.

At least 1 killed after pickup truck collides with semi