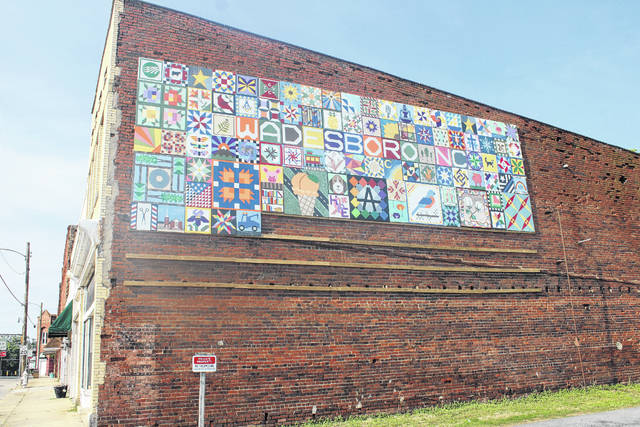 WADESBORO — In 1981, Anson County native Gary Porter asked for a loan that would change the course of his life and make monster truck history.

“I went to the bank and asked the lady there if I could borrow $9,500 to build me a monster truck,” said Porter. “She nearly had a heart attack and asked me, ‘Does your mamma and daddy know what you’re doing? They’re going to have to cosign this loan.’”

Porter’s brother owned Porter’s 4×4 Center in Wadesboro. The idea was to build a monster truck to help advertise the business. Luckily for Porter, his parents agreed to cosign the loan, which jump-started a career in the monster truck industry that spanned over 30 years.

“Back in the day before monster trucks,” explained Porter, “We would go out riding in the mud, through paper company land on little logging roads. I just wanted to make the next step and I thought if I build a monster truck, it would help advertise my brother’s shop and generate revenue to pay off the loan that I had taken out.”

In 1981, Porter was driving a 1972 Chevrolet truck. “It was jacked up with 16 inches of lift and it was getting impractical to drive on the road,” said Porter. “Plus, I was beginning to attract the attention of a few law enforcement officers who thought the truck was too high to drive on the street. So, we decided to turn it into a full-fledged monster truck.”

Once that hurdle was crossed, Porter, with the help of friends and family, did his first show with the truck, the Carolina Crusher, in July 22, 1985. “That was when the monster truck industry was just getting started,” said Porter.

Monster trucks are specialized trucks with enhanced suspension, four-wheel steering, and tires that are at least 66 inches tall 43 inches wide. They first became popular in the 1970s in conjunction with sports such as mud bogging and truck pulling. Owners of these vehicles had them altered to compete in such events.

One of the first trucks of this type to garner attention on the national stage was Bob Chandler’s Bigfoot, which was created from a 4-wheel drive Ford F-250 with enormous tires and an enhanced suspension system.

The Silverdome in Pontiac, Michigan is credited with hosting the first monster truck show in 1982. Throughout the 80’s and ’90s, the sport grew to fill arenas and stadiums across the world.

Porter drove the Carolina Crusher from 1985 to 2001 and again from 2001 through 2015. In 1988, Porter raced on the first nationwide TNT Tuff Trax Tour. In 1991, Porter would win the inaugural PENDA Points Championship.

“At one time, I had three Carolina Crushers touring the country and three separate drivers,” said Porter. “We all did different shows for different promoters.”

The Carolina Crusher would be sold to Paul Shafer in 2001 and afterward, Porter would drive the monster truck Grave Digger from 2001 through 2011.

During his time as a driver for Grave Digger, Porter would win the Monster Jam Points Series in 2003, WMTRL Championship in 2004, and the King Of The Beach Wildwood, NJ in both 2010 and 2011.

In 2013, Porter was inducted into the International Monster Truck Hall of Fame located in Auburn, Indiana. He would return to drive Carolina Crusher from 2015 until his retirement from the industry in 2017. His last race was at Hagerstown Speedway in Maryland.

“After 32 years of traveling, meeting people, and seeing what I have, it’s hard for me to pick out one particular highlight of my career because there were so many and each was unique,” Porter said. “When I first started, if you made it to the 4 Wheel Jamboree Indianapolis you had hit the big time. After that, there was a big event in Houston, Texas out there in the Astrodome, if you got invited to go out there, you had made the big time.”

One of his favorite things to witness over his long tenure as a driver was seeing early fans bring their children to the shows. “It’s pretty awesome to see the kids turn into second-generation fans of the sport,” said Porter.

Porter’s contract wasn’t renewed in 2017, but he doesn’t view his situation as retirement; it’s a career change. Instead of driving monster trucks, he now operates heavy machinery.

“When I was through with the monster trucks,” said Porter, “I had an interest in running heavy equipment, doing land clearing and grading. That’s what I’ve been doing since I’m no longer driving the monster trucks. I’ve been blessed with plenty of work and employees.”

Operating heavy equipment and driving a monster truck do share some commonalities.

“You’ve got to take care of and maintain your equipment,” explained Porter, “because if you don’t take care of your monster truck, you’re not going to be competitive on the race track and the same goes for your heavy machinery, it’s not going to be dependable and work right if it isn’t taken care of.”

“I’ve been to a lot of nice places all over the world,” he continued, “but there’s nothing like home and coming back to Anson County. My family and friends are here.”