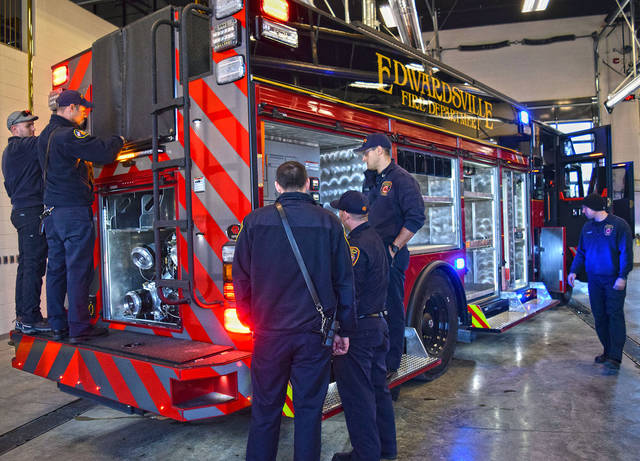 Firefighters flocked to check out the new arrival in February when the city took delivery of its first new fire truck in almost 20 years.

Firefighters flocked to check out the new arrival in February when the city took delivery of its first new fire truck in almost 20 years.

EDWARDSVILLE — Firefighters can’t help but be excited when there is new equipment to use, according to Edwardsville Fire Department’s Jake Sweetman.

The fire department took delivery of its first new fire truck in almost 20 years back in February. It’s a 2019 Rosenbauer Commander rear-mount pumper with an extruded aluminum body and cost about $800,000. It seats four — driver, officer and two firefighters.

“We’ve had lots of ‘conversations’ about who’s going to drive it,” quipped firefighter/paramedic Sweetman regarding the department’s newest vehicle, assigned 1310 as its call number.

Sweetman was one of a six-member committee that spent 18 months deciding how the truck should be equipped and what features fell into the “must have,” “could use” or “would be nice” categories.

Firefighting technology, like computer technology, changes quickly. Before the truck’s arrival, Fire Chief Rick Welle notified his staff they would not be able to simply climb aboard the new arrival and just drive it or operate its features with no training.

“The rescue pumper has the capacity and power to carry the specialty tools needed for a wide range of rescue tasks and still remain a powerful and agile tool for firefighting,” said Welle. “Despite its perceived size as it goes down the road, the vehicle handles very well. The quality of the build ensures it will provide great service to the city for the next few decades.”

Sweetman said the truck has features such as digital gauges and electronic water valves that operate differently than the equipment on the older trucks.

“We have to do driver training, which involves a minimum of three hours,” Sweetman said. He said other parts of the training include a driver’s safety obstacle course, consisting of a slalom, parallel parking, maneuvering in tight spaces and more. Sweetman said this truck drives differently the other units.

The truck also features a remote-controlled deck water gun. At a fire scene, firefighters can rotate the six-inch nozzle in a full circle as well as up-and-down. In route operation, Sweetman said having the water gun work remotely means the firefighter who might have manned similar equipment 30 years ago can be deployed elsewhere at the scene, increasing efficiency.

Another innovation is the Green Star Idle Reduction System. When at a scene for a long time (the time limit can be preset by staff beforehand), the system switches off the truck’s main diesel engine in favor of a three-cylinder Kubota diesel engine mounted near the top of the truck. This smaller unit maintains power to the truck’s heating-ventilation-air-conditioning (HVAC) system, lights and computer system while reducing the amount of emissions generated from extended idling.

“One of the most improved things about the vehicle is that it has a full air-suspension, with independent front suspension and a solid, rear axle,” Sweetman said. “It rides phenomenally.”

He added that the new truck’s sound deadening is superior, too. He said in the old truck while on a call, if the guys wanted to talk to each other they had to yell and listen closely or use headsets. He compared that cacophony to the new truck, in which he said the guys can talk, not shout, at normal volumes without the aid of equipment.

Overall, the truck has a larger footprint than its predecessor, which translates to more room for their gear, which is a positive. Sweetman said in the old truck it was common for guys to stash loose equipment in the cab because there was no room elsewhere. That could translate into hazards such as a 10-pound axe tumbling end-over-end across the cabin if the old engine were involved in a traffic accident, he said.

“On a typical day, there should be nothing flying around the cab,” he said.

Welle said his department has bought two apparatus from the used market in the intervening 19 years since the city bought the previous new truck in 2001.

The truck that 1310 replaces, Engine 1318, has been decommissioned, Welle said, and will be declared surplus and put on the open market, with the price to be determined. If there’s no interest, he said they will likely turn to a third-party broker on the used market. The old truck remains housed at Station 1.

“We have a regular rotation for each shift as to what station they are assigned,” Welle said. “The engine runs out of Sta. 1, so those on duty here on any given day have the privilege of using the new truck. All have been through classroom and practical training (driving, pump operations, etc.) specific to this pumper and are qualified to operate it.”