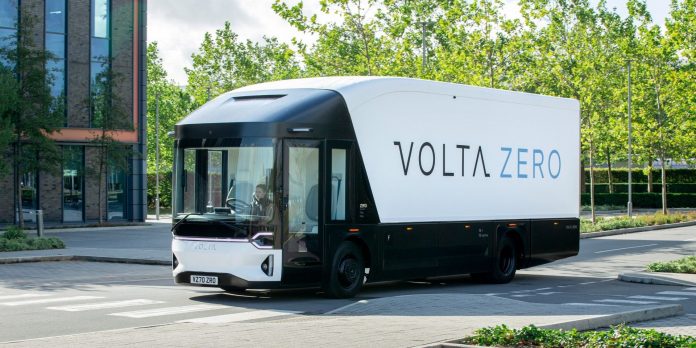 The Volta Zero will start operator trials with European parcel delivery and logistics companies in the first half of 2021. Companies are placing orders, and the vehicles are expected to be delivered when production starts in 2022.

Design-wise, the Volta Zero has 220 degrees of direct vision around the vehicle, which is useful in busy cities for safety purposes. It also has rear-view cameras that replace traditional mirrors, a 360-degree bird’s-eye camera that shows the driver their complete surroundings, and blind-spot warning systems. The driver, who sits in the center of the cab, will sit lower than in a conventional truck, with their eye-line at around 1.8 meters, making it easier to see pedestrians. Further, the Volta Zero will be the first road vehicle to use a sustainably sourced natural flax material and biodegradable resin in its exterior body panels.

The Volta Zero will use 160-200 kWh of battery power and will run on Li-Ion Phosphate batteries. At the end of the battery’s life, it can be recycled and reused as an energy storage device. The Zero has an operating range of between 95 and 125 miles (150 to 200 km).

The Volta Zero offers a payload of 8,600kgs, with an overall volume of 37.7m3 and is designed to accommodate 16 Euro pallets. A refrigerated cargo box will also be available, without reducing overall volume as a result of the vehicle design. Volta Trucks is integrating the use of the vehicle’s battery for the cooling and refrigeration unit of the cargo box that’s normally diesel-powered, thus further reducing CO2 or particulate emissions from commercial vehicle operations.

The range doesn’t sound much but the hub and spoke delivery philosophy means it is perfect for the role Volta is aiming at. Electric trucks like this will take goods from huge, centralized hubs and deliver into cities using predictable routes and return to the same charging point.

Global financial firm The Carlyle Group clearly feels that green energy is worth investing in, as it has announced the acquisition of Maine’s largest portfolio of solar development projects. It’s also one of the largest solar portfolios in the US Northeast.

Carlyle is acquiring the solar portfolio through Acadia Renewable Energy LLC from the global solar independent power producer BNRG. It is a $130 million capital investment.

The portfolio consists of eight solar projects across southern Maine. The solar farms will sell power to Central Maine Power and Versant Power under 20-year power-purchase agreements. The solar farms will generate more than 100 MW, enough to supply around 19,000 Maine homes with solar power.

Construction on the portfolio kicked off in June 2020 and is expected to be finished by third-quarter 2021.

France has announced its €100 billion stimulus plan, called “Relaunch France,” and €30 billion of that will be devoted to green energy policies.

Much of the stimulus plan’s green investment focuses on weaning off fossil fuels in the industrial, transport, and construction sectors, with €9 billion. The hydrogen industry will get €2 billion over two years to develop green hydrogen technologies and a national hydrogen economy. Hydrogen is used to store and transport energy created by wind and solar.

There will also be one-off measures such as temporary cuts to tolls for rail freight and long-term investment such as around €8 billion for the renovation of buildings and €1.2 billion for public transport, reports Politico.

France’s goal is to reach net zero by 2050, as part of the Paris Agreement.