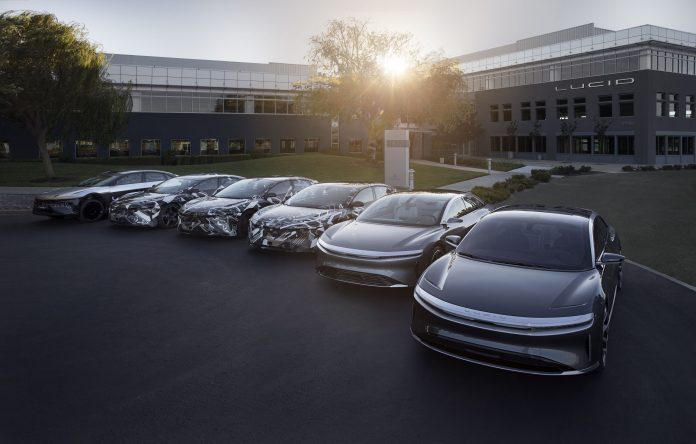 California-based electric vehicle company Lucid is planning an SUV to go along with its upcoming Air sedan, and beyond that, a pickup truck isn’t out of the question.

Lucid CEO Peter Rawlinson also told Green Car Reports that while he expects to eventually offer a full lineup of plug-in vehicles, he has no plans to manufacture them for other companies to market as their own.

The company initially planned to debut the Lucid Air at the New York Auto Show in April, but that event was cancelled due to the COVID-19 pandemic. The wraps will now come off in a global online reveal in September.

Development briefly ceased due to the pandemic, but in June, Lucid reported its 1,000-plus employees were returning to work in stages, as local and state regulations allowed.

Lucid was founded in 2007 as Atieva and initially focused on battery technology, but changed its name in 2016 and announced its intention to build cars. Two years later, it received more than US$1 billion from Saudi Arabia’s Public Investment fund.

The company is building a factory in Casa Grande, Arizona, which it said is the only facility in the U.S. purpose-built for electric vehicle production. Rawlinson said the factory is being built in the record time of eight months from “a piece of dirt” to a pilot production line that will be installed this month. The first Lucid Air models are planned for delivery in the spring of 2021.

The company recently announced the Air’s range will be 832 kilometres on a single charge, topping the longest-range Tesla Model S or Porsche Taycan by more than 160 kilometres. Rawlinson, who was promoted to CEO in 2019, had been chief engineer on the Model S.

In his interview with Green Car Reports, Rawlinson confirmed an SUV will be produced off the Air platform, and will go into production early in 2023. Having more than one vehicle is essential for the economy of scale necessary to build the business, he said.

The plant will be expanded at that time for its production. Paint and production lines will be flexible to allow for more vehicles in future, including a pickup truck.

Lucid announced it would open 20 sales and service outlets in North America by 2021, although Canada wasn’t on its initial list of eight confirmed locations. Like Tesla, Lucid plans to see its cars directly to the consumer. Pricing hasn’t been announced, but an initial estimate is around US$150,000 for the Air sedan.