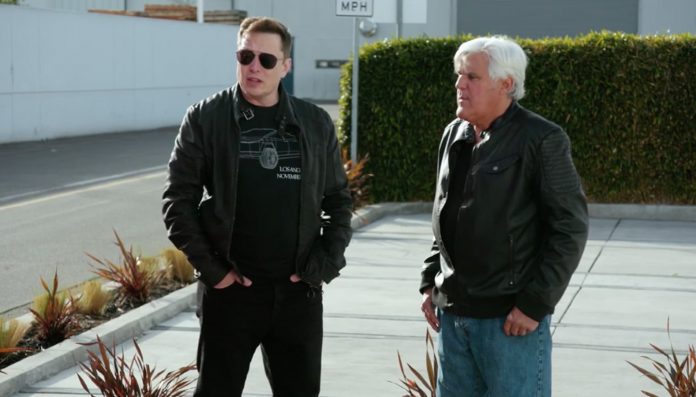 “I saw it on TV … but nothing strikes you until you see it in person,” Leno says in a new episode of “Jay Leno’s Garage” that airs on CNBC on Wednesday at 10 pm ET.

The former late-night talk show host and longtime auto aficionado travels to Tesla’s Hawthorne, California headquarters for the episode. There he’s joined by Musk and the Cybertruck, which is slated to begin production in late-2021 and will start at $39,900, for a test drive.

In fact, Leno drives the Cybertruck in Musk’s The Boring Company test tunnel for a rapid transit system, which runs for 1.1 miles underneath Los Angeles.

“Elon has dared me to take [the Cybertruck] down The Boring Company’s test tunnel, right under Los Angeles,” Leno says as he and Musk drive the electric pickup into the tunnel, which is roughly 14 feet wide. Musk says the tunnel averages between 50 feet and 60 feet in underground depth.

“It’ll be quite interesting to see if we actually can fit down there.” Musk says, noting that the company had never before even tried to fit the more than six-foot-wide truck through the tunnel.

Tesla CEO Elon Musk and Jay Leno check out the new Cybertruck during an episode of “Jay Leno’s Garage” on CNBC.

Leno and Musk get the Cybertruck through the tunnel, which ends with an elevator platform that lifts the pickup back to the surface.

Meanwhile, Leno points out how the Cybertruck — which has a “cyberpunk” styling that Musk has said was inspired by the sci-fi movie “Blade Runner” as well as the James Bond film “The Spy Who Loved Me” — challenges traditional perceptions of what a pickup truck should look like.

Upon the Cybertruck’s unveiling last year, for instance, The New York Times noted that Tesla’s electric truck is “pointy”, with a stainless steel exterior and sharply-angled design that immediately set it apart from traditionally popular pickups like Ford’s F-150.

Of course, some analysts have worried that the Cybertruck’s futuristic design would make it less desirable to the typical pickup customer. “It misses the core truck buyer,” analyst Gene Munster of Loup Ventures said of the Cybertruck in November. “A contractor is not going to show up to a work site in this truck.”

“I think there’s a preconceived notion of what a pickup truck should be, and that’s something that we said, ‘If we’re going to go bold, then we have to do something that breaks that norm.'” Tesla’s chief designer, Franz von Holzhausen, tells Leno in the episode.

Still, by the end of November, Musk tweeted that Tesla had received over 250,000 pre-orders for the Cybertruck. (Though, it’s worth noting that a Cybertruck pre-order is not considered a deposit, according to the pre-order agreement on Tesla’s website, and it only requires a $100 processing fee that does not count as a purchasing agreement. Tesla has not yet released any official sales numbers for the Cybertruck.)