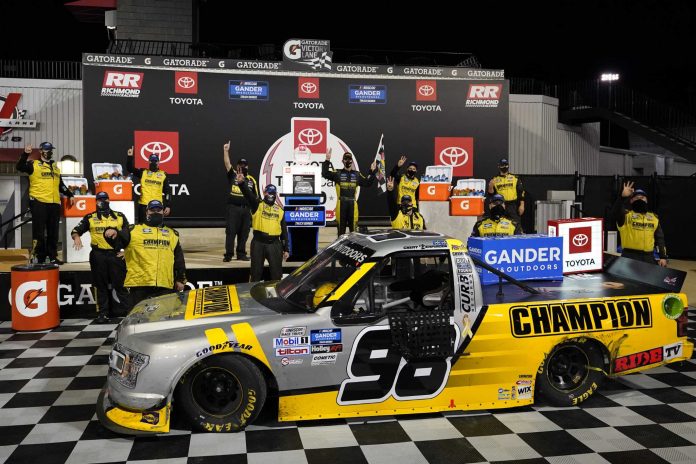 RICHMOND, Va. (AP) — Grant Enfinger started the regular season with a win, and finished with one, too. Heading into the NASCAR Truck Series playoffs, he hopes that is a good sign.

“It gives us a lot of momentum, I feel like, and to be honest, we needed it,” Enfinger said after he bounced back from a tire rub that dropped him well back in the field to win at Richmond Raceway on Thursday night.

Enfinger took the lead with seven laps to go, passing reigning champion Matt Crafton for his third victory of the season. Crafton held on for second and Ben Rhodes finished third.

It was a better showing than recent races, when he said “we’ve been beating our heads against the wall,” and was helped along by some good fortune in the way of a caution that ended with 68 laps to go, after he pitted for tires while the race leaders stayed out.

“The caution happened when we needed it to,” he said.

Enfinger matched Sheldon Creed for the most victories among series regulars this season in the last race to determine the final two spots in the playoffs that begin next weekend.

Those berths went to Tyler Ankrum and Todd Gilliland.

Ankrum also benefitted from stopping for tires when Enfinger did.

“That’s pretty much what saved a pitiful night,” he said after finishing fifth.

Crafton, who ended a 67-race winless drought in late July at Kansas, only became a factor at the end and seemed headed for victory before Enfinger caught him in lapped traffic.

“We stole a second,” he said, explaining that his truck was not good early, but kept getting better. The showing also gave him hope as he prepares to defend his series title.

“We’re definitely the best we’ve been in the last couple of years,” he said.

It was an ending that featured a largely different group of drivers than those that dominated.

After a caution on Lap 174, most of the leaders stayed out, and got burned because of it.

Austin Hill, who led 65 laps and had clinched the regular season championship earlier in the race, was running second, just behind Rhodes, who led 66 laps. Both had passed on stopping for tires, and Hill was passed quickly by David Ragan and Brett Moffitt, and Moffitt kept on surging, grabbing the lead from Rhodes on Lap 186.

Crafton also joined the fray, climbing to second followed by Ankrum, who was fighting for that playoff berth, and Enfinger, who’d gone a lap down after a tire rub earlier.

The parade of cars on new tires left those on older tires hoping for a caution, and time to do something on them, but it never materialized. The last restart came with 68 laps to go.

Rookie Zane Smith won the first stage, which was dominated by pole-sitter Hill until a late caution. Hill and most of the leaders stayed on the track when the yellow flew, but Smith pitted and was able to track Hill down before the 70th lap went on the scoreboard.

Rhodes won the second stage after passing Enfinger with 20 laps to go. Enfinger had grabbed the lead from Smith 10 laps earlier, and his night took a bad turn shortly after the restart for the third stage. Running second, a tire rub sent him to the pits.

It was the series’ first visit to Richmond since 2005 and only two drivers — Crafton and Johnny Sauter — had ever raced on the 0.75-mile oval. But familiarity did Sauter no favors as he went to pit road early and emerged two laps down. He finished 27th.