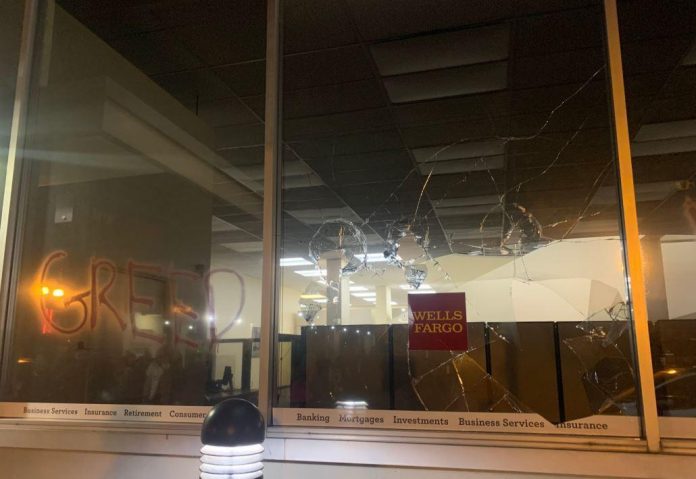 The deliberate property destruction is reminiscent of the the first night of protests following the killing of George Floyd on May 29, where several businesses on Sixth Avenue were vandalized.

On Saturday night Eugene police made their presence known after the protesters has marched throughout downtown, some spray painting property, breaking windows and lighting trash cans on fire along the way.

Police in riot gear ordered people to disperse saying “You are engaging in an act of riot and unlawful assembly. You are ordered to disperse from the area immediately.” The police told the group to disperse.

Police reportedly arrest at least one person, and police deployed tear gas to stop the protest.

The Black Lives Matter protesters also were out Saturday in a show of solidarity with the protesters in Portland. Solidarity events were planned at multiple U.S. cities, such as Seattle, Salem, Washington, D.C., and New York City.

The evening started quietly around 8 p.m. with local grassroots groups, such as Eugene’s own Wall of Moms, in attendance with Black Lives Matter.

The scene quickly erupted in contradicting chants as a group of people with tall wood planks reading “All Lives Matter” and American flags formed a line along East Eighth Avenue.

Eugene’s own Wall of Moms, clad in bright yellow “Black Lives Matter” shirts ran to form a line in front of them.

Some heated arguments between members of the two groups start to occur.

A little before 9 p.m. there were people in the crowd using what sounded like a Taser and a shot was fired into the air.

There was no visible police presence during this. As of 9:30 p.m. Eugene police were there.

Fights started breaking out between the groups, with shoving and yelling in each other’s faces. The groups spilled into the street blocking Mill Street.

At 9:15 the All Lives Matter group has been pushed back across to the other side of Mill Street, away from the courthouse.

And a fight has broken out. It happened fast so I can’t see who started. What I gathered is one ALM protester was trying to get back into the middle to get something and there was a lot of pushback.
Fighting has stopped but we’re officially in the street blocking Mill. pic.twitter.com/R0Q4qS9XnP

At around 9:40 p.m. the scene had chilled out considerably as All Lives Matter group has about 30 people, and the Black Lives Matter protesters, which span several blocks, made its way back to in front of the courthouse.

Now back at the courthouse, the group is starting to hear from speakers. One speaker up front says, “We are here because we believe our community deserves the money from the police department. Not a cent should go to the police, to the prison system to ICE.” There’s talk about how Black and Indigenous lives deserve liberation and how property destruction is not violent, because property doesn’t feel.

The group marched to the Lane County Jail from the courthouse. Once there, the protesters were met with Lane County Sheriff’s Office saying over a loudspeaker that the protest is an unlawful assembly and ordered the group to leave.

At the jail, Isiah Wagoner, former organizer with the Eugene BLM group Black Unity, was heard telling protesters that they do not represent Black Lives Matter and left the area upset with the group. “You get to go home, you get to go home to your kids,” he said. “Black people get shot in the street for this! I’m tired of it!”

The group started marching again through the downtown area, headed west on Fifth Avenue and are making its way near the intersection of West Sixth Avenue and Washington Street, the same area where businesses were vandalized during a May 29 riot.

The protesters stopped at Kesey Square at East Broadway and Willamette Street. Some in the group are building a barricade with picnic tables and signs. Some people have been seen spray painting property.

In that area, the block of West Broadway between Willamette and Olive streets, recently was closed to traffic to open Broadway Streatery. It allows businesses to expand their seating and serving areas into the right-of-way area and add space for patrons to social distance.

As the group moved down Eighth Avenue, people are tagging and breaking windows in the Wells Fargo on the corner of Broadway and Oak Street and spray painting graffiti on Whole Foods, while others in the group are trying to stop the property destruction.

August Montana, a student at Lane Community College, said he’s been one of the people in the group yelling for people to stop destroying property and putting out trash can fires lit by other protesters in the group. He said the destruction is not what Black Lives Matter is about.

Eugene police arrived in riot gear. Police order people to disperse saying “You are engaging in an act of riot and unlawful assembly. You are ordered to disperse from the area immediately.”

Most of the group complies and leaves the area, with only about 10 people hanging back.

As they were heading into the protest, a group of three moms who part of the Wall of Moms group, said they’re no strangers to protests. They’ve been doing this since the 1960s, they said.

One, Maura Egan, said it’s important to physically show up when so many people only post on social media.

“We need to show in force people are willing to stand up for democracy, because it’s disappearing before our very eyes,” Egan said.

A digital flier on Facebook from an organization called the PNW Youth Liberation Front called on people to come Saturday to support Portland demonstrators.

The protest is apparently a response to an open letter from groups protesting in Portland, including Portland Rising Tide, Popular Mobilization, the Revolutionary Abolitionist Group, Colectivo X and Symbiosis PDX. The “From Portland to the World” post said that the Portland movement wants “to accept your support — and we say the best way to support us is to take inspiration from Portland and bring this fight to where you are in any way you can.” Nearly 40 U.S. are hosting similar companion events Saturday, including Seattle, Tacoma, Oakland, Calif., Los Angeles, New Jersey, Washington, D.C., and New York City.

The Truth Behind The Dodge’s Classic Power Wagon Truck