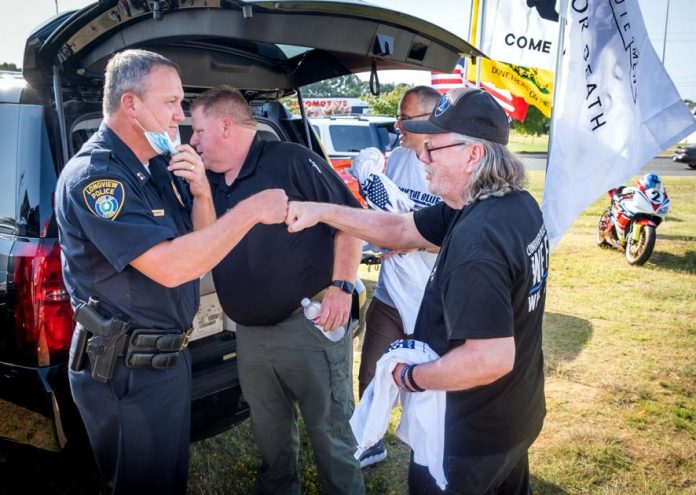 More than 100 people turned out Friday to show support for local law enforcement at the Army Navy Store’s Back the Blue Day.

Owner Scott Mackey said he spent about two months planning the event at the Longview store after seeing videos on social media.

“I saw some videos online that were kind of derogatory to the police,” Mackey said, “and I thought we need to learn to respect the police for all that they do — all the sacrifices they make for us — and I just thought this would be a great way to show them our support.”

Mackey said proceeds from the event benefited front-liners or first responders in need of financial assistance.

“We’re trying to raise money for the Longview Police Officers Association,” he said. “Our goal is to raise $3,000 tonight through raffles and a silent auction.”

From her food truck, Edible Art owner Debbie Fontaine and daughter Mykayla handed out 300 blue cookies they prepared especially for and donated to the event.

“I just want to thank everyone for their support,” Mackey added. “Everybody has just been so supportive. We’ve had a huge response on social media. It’s been a great thing and a great opportunity to get to know the community.”

Moving House With The Renault Triber