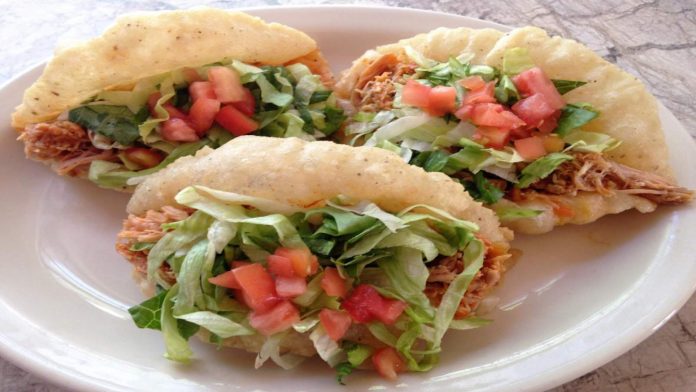 SAN ANTONIO – When the topic of authentic Tex-Mex food comes up in San Antonio, the discussion generally revolves around tacos.

The history, evolution and future of the taco was the topic of discussion at a recent UTSA virtual panel.

UTSA’s Food for Thought series explored what makes a taco a taco and the traditions behind this South Texas cuisine favorite.

“The taco is an American staple. It has been transformed in the brief span of 50 years,” said John Phillip Santos, moderator and UTSA distinguished scholar in Mestizo studies.

The puffy taco is San Antonio’s signature taco. Ray’s Drive Inn on the West Side is considered by many publications to be the home of the original puffy taco.

The tacos are also served at the restaurants owned by the Barrios family. Diana Barrios Trevino, chef-owner of Los Barrios, was part of the UTSA panel.

She said her parents started to serve the puffy taco from a small local restaurant named La Palmita.

“That is where my mother learned to make the puffy taco,” said Barrios Trevino. “She didn’t create it, but we’ve had it on our menu since 1972 and it really is a little taste of heaven.”

Across the country, the taco started to make its way to mainstream American after food producer George Ashley started packaging and selling canned tortillas.

“His ingenious thing was to sell the tortillas to midwestern housewives in the 1950s, he created a taco kit,” said Gustavo Arellano, author of Taco USA: How Mexican Food Conquered America.

Arrellano told the panel the canned taco kit led to the creation and expansion of Mexican fast-food restaurants like Taco Bell and Del Taco.

“Then God bless los Mexicanos, the people from Mexico. In the 1970s and 80s, they started coming up to United States and spread the real taco gospel all across the country,” Arellano said.

The taco has become so popular, a Netflix culinary docu-series called the “Taco Chronicles” was created to celebrate the food, the people who make them and its origins.

“Something that’s been important to me is to show how essential that the movement of people is within Mexico, but also crossing borders is to maintain these lively foodways,” said Hallie Davison, producer of the series.

The panel shared their experiences about what makes a great taco, but most agreed it ultimately comes down to how fresh and flavorful the tortillas are.

“Tortillas to me define what San Antonio does especially well, whether it’s a corn tortilla with al pastor or just a beautiful flour tortilla with bean and cheese. Those are defining characteristics of those tacos to me,” said Mike Sutter, San Antonio Express-News writer.

The panel also looked into the future of tacos and discussed upcoming trends such as vegan, sushi and infused tacos, barbacoa grilled cheese tacos and wood-fire grilled tacos.

José R. Ralat, author of “American Tacos: A History and Guide,” mentioned a restaurant he plans to profile that makes Yakitori-style Mexico food.

“The guy is over the wood grill. He’s got apple wood, cherry wood, all kinds for whatever particular protein that he has,” said Ralat.

A popular taco trend that has made its way to the San Antonio area is birria de res tacos, which is a Mexican beef-based soup.

The owner said they opened three weeks ago and sell out of the stew as fast as they can make it.

No matter what the trend is, everyone on the panel agreed the taco shows no signs of slowing down.

“The taco is the best ambassador Mexico will ever have,” said Arellano. “With every bite that whoever is eating this taco, it’s a victory for us and it’s slowly getting us to a better place.”

You can see the full panel discussion in the video below.