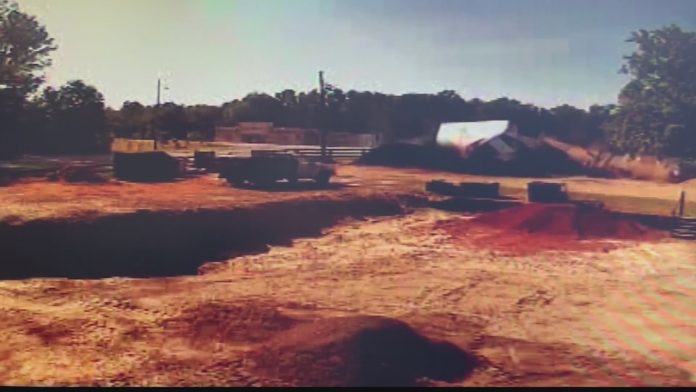 A Columbus councilor says a crash at a dangerous intersection in the Columbus panhandle last week illustrates the need for a traffic light.

WRBL News 3 has obtained exclusive surveillance camera video of the horrific wreck involving a tractor-trailer rig and a heavy-duty pickup truck. It happened at Beaver Run Road and U.S. 80.

The video was taken from multiple security cameras at The Sandlot, a landscaping materials business at the intersection of Psalmond Road and Beaver Run Road. A westbound 18-wheeler from Kehe Foods from Douglasville, Ga., strikes a Dodge Ram 1500 that was turning on Beaver Run road.

“It sounded like an explosion when it first happened,” said Chris Symonds/co-owner of The Sandlot.

Symonds and another man were in the office, a good 75 yards off the highway.

“I didn’t see the initial impact, but I looked up just in time to see the 18-wheeler come through  the fence and come careening down toward me,” Symonds said. “I was pretty fearful that he was not going to be able to stop in time before he got down to my office.”

Improvements are coming to this inspection — and soon. U.S. 80 intersects with Psalmond Road. Georgia DOT is putting turning lanes off 80 onto both of those road. That $166,000 project is scheduled to be done by the end of July.

Then the city will add a traffic light.

“It’s a miracle nobody was killed,” said Columbus Councilor John House. “This is a dangerous intersection when something like this happens. That video is clear proof that we need a traffic light here.”

That light should be up by the end of the year.

This wreck was last Tuesday morning about 9:50. If it had been on the weekend or during Christmas season, it might have been a different story.

House said there is only one assumption when you see the video.

“I would have assumed the man in the car was dead and the tractor-trailer driver probably seriously injured,” House said.

The truck driver, Terry Turner of Douglasville, told News 3 Monday that he is recovering from broken ribs suffered in the wreck. The driver of the pickup was transported to the hospital, as well, with non-life threatening injuries.

Attempts by News 3 to contact the driver were unsuccessful.

Commentary: How quickly we forget: Of fathers and essential workers |...

The SVE Syclone debuts as the “world-fastest” pickup truck