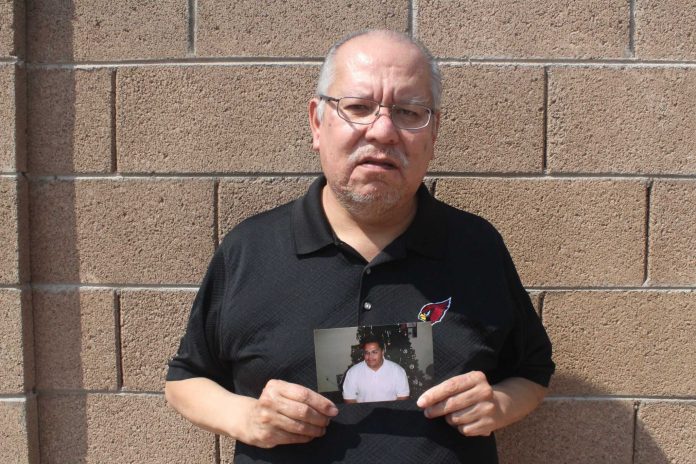 FLAGSTAFF, Ariz. (AP) — Late on a fall evening in 2001, Alyce Slim and her granddaughter stopped at a gas station on the Navajo Nation after searching for a traditional healer for leg ailments.

There, in an area where hitchhiking is common, Slim agreed to give two males a ride. They got into her pewter-colored pickup truck and when she stopped later to let them out, they didn’t budge.

Instead, Lezmond Mitchell and Johnny Orsinger stabbed Slim 33 times and placed her lifeless body next to the 9-year-old in the back seat as they drove to an abandoned sheep camp. They told Tiffany Lee to prepare to die and slit her throat. She was still breathing, so they dropped rocks on her head, killing her, too.

As the 38-year-old Mitchell sits on federal death row, his execution scheduled for Wednesday, the Navajo government is asking officials to spare his life on the basis of cultural beliefs and sovereignty. The stance is pushing up against the wishes of some of the victims’ family for the execution to move forward, including Tiffany’s parents.

“An eye for an eye,” the girl’s father, Daniel Lee told The Associated Press. “He took my daughter away, and no remorse or anything like that. The Navajo Nation president, the council, they don’t speak for me. I speak for myself and for my daughter.”

Under federal law, Native American tribes can decide whether they want their citizens subjected to the death penalty for a set of crimes involving Natives on tribal land. Nearly all 574 federally recognized tribes, including the Navajo Nation, have opted out.

Mitchell was the first Native American sentenced to death since the resumption of the federal death penalty in 1994 and the only Native American currently awaiting execution. He ended up on death row because he was convicted of carjacking resulting in death — a crime that carries the possibility of capital punishment regardless of where it happens.

His upcoming execution is the first of a handful set after the government said it would carry out executions following an informal 17-year moratorium. The case has stirred emotion among tribal members and painful reminders of the grisly crime.

Mitchell and others used Slim’s truck in an armed robbery. He and Orsinger returned to where they dumped the two bodies, mutilated them and buried some of the remains while dragging others into the woods. They burned the victims’ belongings and washed their knives in a stream nearby.

Days later, tribal police found the pickup truck abandoned in Tsaile where many tribal members make a living by ranching, farming and doing arts and crafts. Mitchell and others tried to torch the truck, but the windows were rolled up and the fire had no oxygen.

“All they did was make a smoky mess on the interior of the truck and leaving all the relevant evidence related to the murder, the carjacking and the robbery behind,” said former FBI agent McDonald Rominger, who worked the case.

“We can never lose sight of the big picture, be forward-looking,” Slater said. “Every action creates precedent, especially when you’re a governing body. This is not just going to impact the Navajo Nation. It’s going to impact all of Indian Country.”

More than a dozen tribal leaders across the country and individual Native Americans have supported the Navajo government’s request.

Federal criminal jurisdiction on tribal land dates back to 1885 and stems from Congress’ displeasure over how one tribal nation settled a killing with restitution to the victim’s family — money, horses and a blanket. The federal authority is still disputed today.

Slim’s daughter and Tiffany’s mother, Marlene Slim, initially opposed putting Mitchell to death. The tribe has used her previous statements in pushing for Mitchell’s sentence to be reduced to life in prison.

Earlier this month, attorneys for some of Slim’s family and Lee wrote to tribal officials saying they support the federal government’s efforts to carry out the execution.

“Mr. Mitchell’s actions destroyed this family,” the letter read. “Mr. Mitchell did not consider or have any respect for the Navajo cultural teachings that stress the sanctity of life.”

Mitchell has long maintained he wasn’t the aggressor in the killings. Orsinger, now 35, had a criminal record but was a juvenile at the time and could not be sentenced to death. He is serving life in prison in Atlanta.

Letters that Mitchell’s attorneys submitted as part of the clemency petition paint him as a troubled kid who was shuffled around homes but was high-achieving, played varsity football and was a problem-solver.

“He was a good kid and he always took care of the children, always protected the children, so when he was involved in a crime against a child, it was really hard to believe,” said Mitchell’s uncle, Auska Mitchell.

Putting Mitchell to death would “break my heart,” he said. “I do hope that things change … What’s even worse is I can’t see the guy.”

Mitchell has lost all of his appeals so far, a point U.S. Attorney General William Barr reiterated in announcing Mitchell’s latest execution date.

“The Justice Department upholds the rule of law, and we owe it to the victims and their families to carry forward the sentence imposed by our justice system,” Barr has said.

Alyce Slim was nearing retirement after driving a school bus for 30 years in the district around the Navajo Nation capital of Window Rock in Arizona. Family, friends and her co-workers spent days searching for her and Tiffany when they didn’t return home from their trip and posted pictures of them around the region.

Julie McCabe, whose sister was close friends with Marlene Slim, said Alyce Slim was gracious, strong, spiritual and hard-working. She had a way of speaking to others without making them feel inadequate or small, McCabe said.

“And the students on her route were just very lovable to her,” McCabe said.

Marlene Slim lamented shortly after the deaths that she would miss out on watching Tiffany grow.

Mitchell’s attorneys declined a request to interview him. They have made multiple requests lately to delay his execution as they argued over protocol and sought to interview jurors over potential racial bias.

“If the execution were to proceed, Mr. Mitchell will be the first, and only, Native American sentenced to death and executed by the federal government in modern history,” his attorneys said.