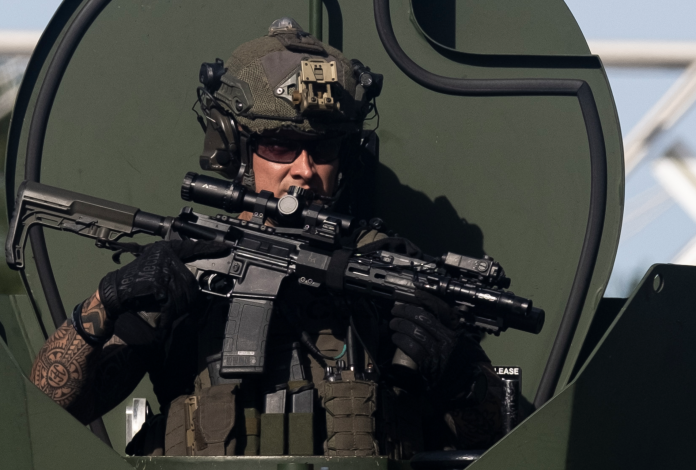 In 1997, Congress codified the federal 1033 program to transfer surplus equipment from the military to civilian law enforcement agencies for domestic counter-drug and counter-terrorism activities.

Two decades later, the Government Accountability Office (GAO) created a fictitious agency to investigate the 1033 program and obtained approximately 100 items worth around $1.2 million. A repurposing program had grown into something else entirely.

“I could’ve gotten anything I wanted,” Charlie Mesloh, who used the 1033 program to secure equipment between 2000 and 2002 while working for the University of Central Florida’s police department, told Yahoo Finance. “You could fill out a form that was the size of a postcard and you can check off everything you wanted.”

What was envisioned a win-win situation — where the military could pass off equipment and local police departments could boost capabilities on the cheap – evolved into a haunting behemoth fueled by the war on terror that militarized police patrolling largely peaceful civilian protests over police brutality.

“As of June 2020,” according to the Defense Logistics Agency (DLA), “there are around 8,200 federal, state, and local law enforcement agencies from 49 states and four U.S. territories participating in the program.” Sometimes there is bidding for equipment, though the 1033 program allows the DoD to transfer the excess military equipment to local law enforcement free of charge (before shipping and maintenance).

And when some police receive military-grade gear, “they want to play soldier,” Wayne McElrath, senior investigative advisor to the Project on Government Oversight, told Yahoo Finance. “When they are get this stuff, they want to use them in capacities that police departments are not [suppose] to use them in.”

Many transfers through the 1033 program are publicly available through the DLA’s Law Enforcement Support Office (LESO), and Yahoo Finance analyzed hundreds of thousands of items transferred over the years. (The database, as noted by Wired recently, is likely not fully comprehensive given lax tracking and oversight by government agencies.)

Many of the items transferred to police departments are run-of-the-mill office expenses such as screwdrivers, pens, shirts, bandage kits, sleeping bags, as well as trucks and furniture.

Dean Esserman, senior counselor at the National Police Foundation and a former police chief of police departments in Connecticut and Rhode Island, said that he found the program useful.

“I took advantage of it when I was chief of police of Providence in 2003 to 2011,” Esserman told Yahoo Finance. “We weren’t interested in military equipment or any type of weapons — we got a truck which helped us when we had the floods in Providence. … We also got some extra furniture for a new police district office.”

A June report by the National Police Foundation also shows that the majority of transfers from June 1, 2019 to May 31, 2020 through the 1033 program involved items that were clearly not weapons, such as “clothing, personal protective equipment such as gloves and face masks, and basic infrastructure needs such as wiring, tools, [and] generators.”

Police departments in several states received particularly expensive items. The California Highway Patrol received what appeared to be a drone worth $22 million in 2016. The Howell Township Police Department in New Jersey received an MRAP worth $865,000 in 2016. An MRAP provided to the Payne County Sheriff Office in Stillwater, Oklahoma, cost $1.3 million.

‘The communication box was used for storage’

The 1033 program also leads to confusion: Local police departments in Indiana, Ohio, and Tennessee apparently received communications equipment generally reserved for psychological operations abroad. But the deliveries were that they seem.

Major Caleb Moritz at the Hocking County Sheriff’s Office in Ohio said that the SOMS-B line item was actually a Humvee stripped of any communication equipment.

The vehicle looks a “normal Humvee with a large empty box shell on the back (looks like a Humvee/Uhaul truck combination),” Moritz stated in an email to Yahoo Finance, adding that the Humvee was used to bust meth labs and the large storage capacity came in handy when they went out to remote areas.

The police department in Kirklin, Indiana, also received a Humvee stripped of communication equipment, and retired police chief John Faucett explained that the vehicle was mostly for rescues and “the communication box was used for storage.”

“These particular rescues were in the county and adjoining counties… our agency could not have reached these residents with our current vehicles,” he said. “During this particular winter, I remember leaving the military vehicles running for two weeks straight so we could respond accordingly and without delay due to the freezing temperatures.”

Faucett added that it if weren’t for the 1033 program, the department “could not afford to purchase this type of equipment” and successfully prevent fatalities.

Esserman noted that police departments receiving heavy duty military equipment first needed the approval of the county, the city’s mayor, or the governor.

“We’re not the military, we’re not the army,” said Esserman, who did not receive such equipment at the police department he oversaw. “I’m sure there was a department that took advantage of it, and over-militarized, which is a shame.”

‘The temptation is to use it’

Amid calls to defund police, Esserman noted that the U.S. has 18,000 police departments — with many different cultures — and called for a nuanced discussion about police reform.

“The most important classroom in the building of every police station is the locker room,” he said. “And that it’s hard to fight culture… when you bring in new ideas and new training, new rookies… they get often eaten up by the culture. So it’s important that you set the tone for the culture.”

For too long the Moundsville police have been needlessly exposed to roadside bombs when patrolling the countryside. They’re finally getting the protection they need https://t.co/PGEGjPQxW3

Another issue that has arisen when local police received military equipment is that they often lack the training from the Department of Defense.

“This is typically stuff that they weren’t buying on their own — they wouldn’t consider it a budget priority,” Cato Institute Senior Fellow Walter Olson told Yahoo Finance’s YFi PM (video above).  But “once you’ve got the gear, the temptation is to use it… we have seen the results — we have seen armored vehicles… we’ve seen grenade launchers, helicopters that turn protests into something closer to a war zone.”

Esserman stressed that police culture in a given locality “is pervasive and persuasive. … Providence or New Haven or Stamford would not look for access to military equipment because we don’t believe in that. Some other departments that pride themselves on being very militaristic might very well be attracted to military weaponry.”

‘Internal controls processes for this program were really broken’

The GAO, known as “the investigative arm of Congress,” analyzed the 1033 program in 2017 and found issues with LESO’s “internal controls” — whether people who shouldn’t be involved in the program are kept out — and whether people receiving the property comply with the existing rules.

The congressional watchdog “created a fictitious federal agency to conduct independent testing of the LESO program’s internal controls and DLA’s transfer of controlled property to law enforcement agencies.” And the GAO’s bogus agencies got access to the program, bid, and obtained approximately 100 items worth around $1.2 million.

“DLA’s internal controls processes for this program were really broken,” GAO’s Zina Merritt, who co-authored the report, said on a podcast done by the agency.

Items they got ranged from “night-vision goggles, simulated rifles, and simulated pipe bombs, which could be potentially lethal items if modified with commercially available items.”

The GAO sting “identified that DLA has deficiencies in the processes for verification and approval of federal law enforcement agency applications and in the transfer of controlled property… Further, GAO found that DLA has not conducted a fraud risk assessment on the LESO program, including the application process.”

The report, titled “Enhanced Controls Needed for Access to Excess Controlled Property,” concluded that “DLA lacks reasonable assurance that it has the ability to prevent, detect, and respond to potential fraud and minimize associated security risks.”

The flood of military gear and lack of oversight spilled over into abuse of the program.

In 2012, the Arizona Republic reported that the Pinal County Sheriff’s Office in Arizona had obtained more than $7 million worth of equipment and passed them on to non-law enforcement agencies while planning to auction off other items. Both are banned by the Pentagon under the 1033 progam.

In 2014, the Department of Justice charged the former chief of the Rising Star Police Department in Lubbock, Texas, after he obtained more than $4 million worth of equipment from the 1033 program and allegedly “sold, traded, pawned or attempted to sell, trade, pawn, several high-value military surplus items that he fraudulently obtained through the 1033 Program.” (The case was dropped after the defendant, William Kelcy, died of melanoma.)

“You don’t need that many MRAPs unless you’re running a small army or militia,” Wayne McElrath, who worked on the GAO report, told Yahoo Finance. “The only way that I can see you needing that many means that you’re cannibalizing an old one to fix one that you’re currently using, or you’re using it for parts.” (MRAPs are Mine-Resistant Ambush Protected military vehicles.)

Mesloh, now a weapons expert at Northern Michigan University, recalled buying “pallets of laptops” between $50 to $75, flat-bottomed boats for $15, M-16s, and even a grenade launcher.

in 2014, after militarized police in Ferguson, Missouri, faced off against civilians protesting the killing of Michael Brown, an 18-year-old Black man, then-President Barack Obama signed an executive order to improve oversight over this program and prohibited the transfer of items like bayonets, tracked armored vehicles, and grenade launchers.

President Donald Trump reversed that order in 2017 and fully restored the program.

Calls to dismantle the program are growing louder amid protests over police brutality against Black Americans after George Floyd was killed by a law enforcement officer in Minneapolis. Some soldiers responding to resulting civil unrest in Washington, D.C., were issued bayonets upon being mobilized in the nation’s capital.

Former Vice President and 2020 presidential candidate Joe Biden recently called for the 1033 program to be ended, among other police reforms.

“There are other measures: to stop transferring weapons of war to police forces, to improve oversight and accountability, to create a model use of force standard — that also should be made law this month,” Biden said. “No more excuses. No more delays.”

Senator Brian Schatz (D-HI) supported the sentiment, tweeting before Biden’s speech that he planned to introduce an amendment to the National Defense Authorization Act to discontinue the program. There is now bipartisan support for the effort.

And if the surplus equipment didn’t go to American police, where would it go?

Mesloh, the weapons expert, argued that it’s a lot more efficient to repurpose the equipment than to recycle it — though repurposing the equipment means militarizing local police.

“There is no simple solution,” he said.

Because at the end of the day, “we’re not soldiers in occupation of the communities we work in,” he added. “We live in the communities, and we’re really guardians.”