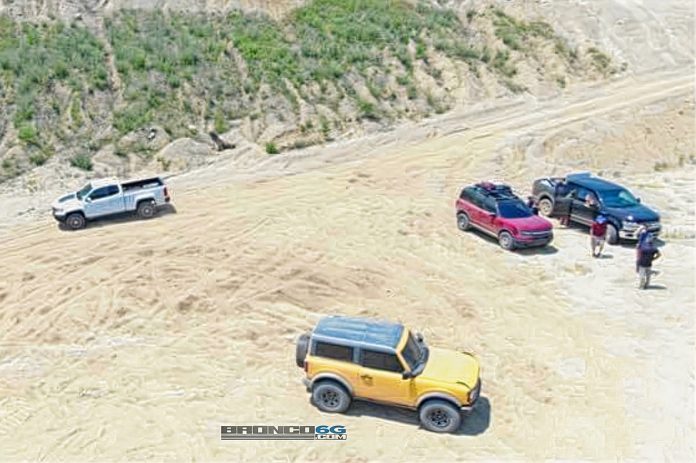 At this point, if Ford wants to keep the upcoming Bronco and Bronco Sport under wraps until their respective unveilings, it had best invest in surplus anti-aircraft batteries — or just never leave the confines of company-owned production facilities. Even those walls have proven a porous barrier, however.

As the weekend dawned, drone-provided aerial spy photos appeared of the two dissimilar Broncos congregating with a Chevrolet Colorado ZR2 out in the desert, far — at least, one would assume — from prying eyes.

The photos, later enhanced by forum members, appear on Bronco6g.com, with the two-door Bronco shown in a dazzling shade of yellow and contrasting black top. The four-door (only), unibody Bronco Sport underwhelms compared to its body-on-frame cousin, decked out in a red-on-black ensemble. That model has already leaked to the internet via ground-based cameras, much like the more off-road-oriented Bronco.

Scheduled for a July 13th reveal (initially, July 9th was the debit date), the Bronco’s specs and abilities have been generously fleshed out via a number of leaks, though undisclosed details no doubt remain in the offing. Same, too, for the Bronco Sport, which adds a retro-inspired body to go with its Escape underpinnings.

The brawny ZR2 seen here no doubt serves as a benchmark for the Bronco, not the Bronco Sport.

Alas, there’s not much new to glean from these distant pics. Past sourcing and leaks have shown the base Bronco to be outfitted with a 2.3-liter Ecoboost four-cylinder mated to either a seven-speed manual (with crawler gear) or 10-speed automatic. We’re told the uplevel 2.7-liter Ecoboost V6 can only be had with the 10-speed. Front and rear locking differentials and sway bar disconnect, coupled with that crawler gear, short overhangs, and balloon-like off-road tires should aid any driver who dares take their priced buy into the rough.

The Bronco Sport will carry either a 1.5-liter four-cylinder turbo or a 2.0-liter unit, with removable roof panels, flip-up rear glass, and upgraded rubber and downsized wheels setting the model apart from its urbanized Escape sibling.