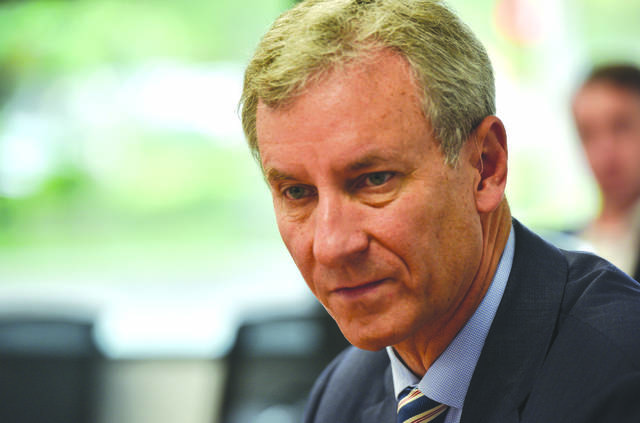 WILKES-BARRE — With votes still being tallied and no official determination of who has won the Republican nomination in the 8th Congressional District, it appears Jim Bognet has outdistanced himself from the field and he will face incumbent Democrat Matt Cartwright in November.

Cartwright, 59 of Moosic, was unopposed on the Democratic side and he collected 56,471 votes according to unofficial results.

Going forward, a Cartwright versus Bognet race will be a microcosm of the presidential race between President Donald Trump and Democratic challenger Joe Biden. Bognet has campaigned as being a Trump person who will work to forward the president’s agenda should he win the seat in the House of Representatives.

Bognet, 45 of Hazle Township, has claimed victory in the primary, despite the refusal of Daniels to concede. Granville issued a concession statement Wednesday night.

“It’s pretty amazing and very humbling to win this nomination,” Bognet said Thursday. “We ran this campaign based on a few key issues and we will continue that message through to November.”

First and foremost on Bognet’s priority list is to bring family-sustaining jobs to Northeastern Pennsylvania and to create economic growth for the region.

“We need a blue collar boom like we had before COVID hit us,” Bognet said. “I will be a tireless advocate for bringing jobs here. we need to get this economy going.”

Bognet also plans to work with Trump on curbing illegal immigration. He said he favors completing “the wall” that Trump began.

Bognet is also intent on “making China pay,” saying that he will work to remove the threat that China poses to the U.S.

“They have stopped our products from entering their country and they have flooded the U.S. with their products,” Bognet said.

Another key issue for Bognet is law and order.

“We must restore law and order in this country,” he said. The recent protests can’t be allowed to turn into looting and violence where law enforcement officers have been shot at and law abiding citizens have been attacked.

Bognet said being on the ballot in a presidential election year will be to his benefit, given Trump’s popularity in Northeastern Pennsylvania.

“My campaign has been based on supporting the president,” Bognet said. “I fully support the president and I am excited to be on the ballot with him. I feel the people will support us as we turn NEPA red again.”

Bognet said he feels the values of the people of the 8th Congressional District are not being represented by Cartwright, who is seeking his fifth term in Congress.

Bognet said he has received support from the Republican Party at the local, state and national levels. He said U.S. Sen. Pat Toomey, R-Lehigh Valley, and U.S. Rep. Dan Meuser, R-Dallas, also support his candidacy. He also said Donald Trump Jr. called him this week to offer his congratulations and continued support.

Cartwright said he was thankful for the number of voters who showed their support for him on Tuesday. Despite being unopposed, Cartwright received 57,471 votes.

“At a time when so many are struggling, Northeastern Pennsylvanians need and deserve a strong voice in Washington with a record of working across the aisle, and finding solutions to the biggest issues we face,” Cartwright said. “This has always been my approach to public service and this campaign, and I’ll continue to focus on a coronavirus response and economic recovery that puts workers, families, and small businesses first; improving access to healthcare; defending Social Security and Medicare; and standing up for our veterans.”

Cartwright said he was humbled by the outpouring of support his campaign has received this primary season, despite the challenging times.

“My sincerest thanks to everyone,” Cartwright said. “Serving our area in Congress is an honor I have never taken for granted. I hope to earn your votes in November and continue the fight to make progress for everyone in Northeastern Pennsylvania.”

U.S. Rep. Dan Meuser, 56 of Dallas, is seeking his second term in Congress. On Tuesday, Meuser, who was unopposed, tallied 60, 598 votes’ He will face either Susan Quick or Gary Wegman, who were in a close battle for the Democratic nomination. All votes are unofficial and incomplete as they are still being tabulated.

Meuser said his campaign has a great and passionate group of volunteers who love their country and they are ready to hit the streets in support of Meuser and the America First agenda. Meuser said he is looking forward to speaking with voters about the future of the nation and the importance of his re-election campaign.

“Representing the people of the 9th Congressional District is a tremendous honor,” Meuser said. “Since taking office, I have supported President Trump’s America First agenda to help create an economy that is inclusive of all people. This includes working to lower the cost of healthcare, strengthening our military and border security, supporting fair trade deals to sell American products around the world, creating good paying jobs, making our education system more accountable for our young people, and protecting 2nd Amendment rights.”

Meuser said House Democrats, under the leadership of Speaker Nancy Pelosi, have advocated for “disastrous policies” that, if enacted, he said would make America unrecognizable and threaten the livelihoods of hardworking Pennsylvanians in the 9th District.

“In this time of uncertainty, we need to accentuate what has made America great and mitigate what has pulled us down,” Meuser said. “I will continue to help make America as great as can be for as many Americans as possible. Republicans also must win back the U.S. House in order to truly advance a pro-growth agenda that will begin a great American comeback once again.”

No injuries in crash involving pickup truck, car in Hyannis –...