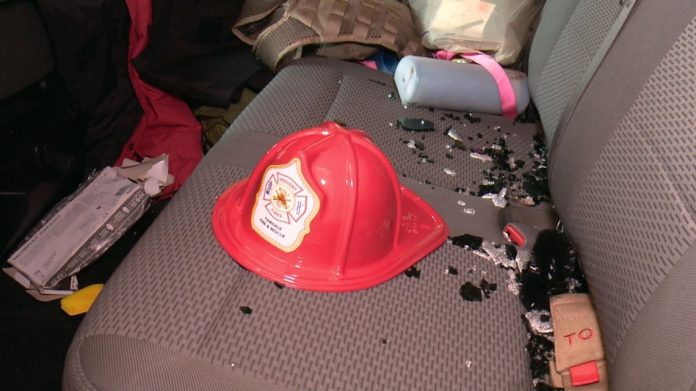 LOUISVILLE, Ky. — The Fairdale Fire Chief is one of several victims in a string of car break-ins around the Hollyvilla neighborhood in Fairdale.

Chief Darrell Roy said it happened early Monday morning. The fire chief’s work truck was parked at his home on Allen Drive. Barking dogs alerted he and his wife, who found other neighbors also outside.

“They told me they heard somebody beating on the side of the truck. They scared two young men off,” he explained.

The thieves were not able to smash the side windows but were able to get into the bed of the truck and break the cab windows to get to the seats.

“They had took medical supplies, trauma bag, a gear bag for rope rescue,” he said, calculating at least $2,500 worth of equipment stolen.

“It’ll just take years to try and replace some of that stuff,” he explained.

Roy has served the community for almost 31 years, protecting those who ended up taking from him.

“I’m hurt more than anything,” he said.

Just down the road, Derick Duncanson’s security cameras caught two people using flashlights to peek inside his SUV. A third person was also seen on the camera, Duncanson believes, working as a lookout.

“It’s scary, it really is,” he said. “It’s hard to describe the feeling of someone violating your personal space.”

Nothing was taken from his truck, but the same can’t be said for his neighbors.

“Both of their vehicles had things stolen from them.”

“Fairdale really is a nice place, I’m not sure what’s going on,” he explained.

Roy is looking to replace what’s been stolen so that he can continue to keep his neighbors safe.

“Firefighters will adapt and overcome, we’re going to move on with our mission, but that mission is going to be a little tougher now.”

Roy and Duncanson have been in contact with police. Anyone with information should call the anonymous tip line at 574-LMPD.

►Make it easy to keep up-to-date with more stories like this. Download the WHAS11 News app now. For Apple or Android users.

Convoy of food trucks to offer ‘fair food’ at Home of...