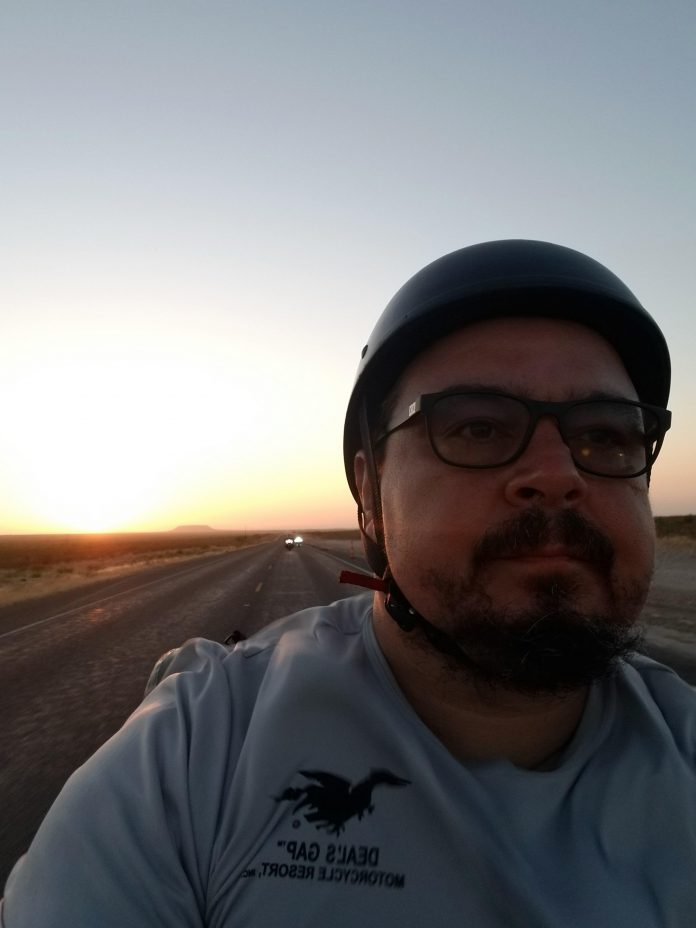 FALL RIVER — Imagine setting off for a 10,000-mile motorcycle road trip with a numbered list of bare-boned turn-by-turn directions. GPS isn’t allowed and major highways are off limits. Hotels are also off limit, so that means catching a few hours of sleep camping roadside.

That’s what Fall River resident Jonathan Santos faced when he took part in the Hoka Hey Motorcycle Challenge with his friends, Everett Halpen of Taunton, and Aaron Darth, from Ohio.

The Hoka Hey takes place every two years starting at a different place in the country. This year, it started and ended in Panama City, Florida. “I covered 10,476 miles in 12 days, 2 hours and 20 minutes,” he said.

Describing it as endurance challenge, Santos said participants have 14 days to complete it to be considered an elite finisher. Those who complete it after 14 days are considered finishers and after 20 days they are considered participants. Starting off, he said there were 139 motorcyclists. Santos started in the 65th position and he ended 23rd, which is even more outstanding considering it was his first time around with the Hoka Hey.

To enter, you have to fill out an application with riding references and pass an interview. For his references, Santos used (among others) membership in the Iron Butt Association, which has timed rides such as 1,500 miles in less than 24 hours and coast-to-coast rides.

The Hoka Hey challenge, he said, is “The One” for long distance riders. For the past five or six years, it’s been on his must-do list. Santos said he’s been on motorcycles since he was about 5 or 6. “I just finally got around to being able to do it. I’ve always had motorcycles. There’s been a couple winters where I’ve had motorcycles but no cars. I ride year-round. I don’t put it away,” he added.

His bike these days is a 2020 Harley Davidson Road Glide.

The top 20 get a Hoke Hey belt buckle and the first place rider is awarded a deer antler trophy that their name gets added to and then in two years it’s passed on to the next first place finisher. According to its website, the “Hoka Hey Motorcycle Challenge is based on the Lakota Sioux principal of WOLAKOTA and the event celebrates all that is pure and powerful in the warrior spirit. A warrior isn’t just a soldier who protects and defends … They are mentors, guides and teachers. They set the example for others and lend strength to the people. The stronger the warriors become – the stronger the people become.”

A ride for charity, Santos was riding for Hoagy’s Heroes, a long-distance charitable riding organization based in West Virginia. Santos, who is also part of the Hoagy’s Heroes staff, said he raised a little over $5,000 from friends, family and business associates for taking part in the Hoka Hey.

After setting off from Panama City on Aug. 9, he and his buddies camped in tents in the Apache National Forest the first night. A couple nights later, Santos slept under a pavilion in a church parking lot during a night of pouring rain and lightning. “We slept at a car wash, a gas station another night… it all depended on where you were,” he said. “We averaged about 18 hours a day in the saddle so that didn’t leave much room for anything else.”

They started out in a group, but because it was a challenge, by the third day Santos had already broken away from his friends. “Everybody rides differently so we knew that going into it. I finished in 12 days, Everett finished in 14 and Aaron finished in 15. Everybody rides at their own pace,” he said.

The challenge route led them through national parks and Native American reservations and “some of the most beautiful country I’ve ever seen in my life,” said Santos. “What I did realize on this trip on this trip is that I’ve missed way too many sunsets and sunrises. I saw every single one, every single day. The landscapes were just amazing.”

Santos made sure to post photos of some of those stunning moments on Facebook for his friends and family following his journey from here in Fall River, where he works at Gold Medal Bakery as transportation fleet manager.

From Panama City, the route took him across the southern part of the country through the entire state of Texas before turning north into New Mexico, Utah, Colorado and then they headed east to Vermont. The final leg took him along the East Coast states back to the starting point in Panama City. In Colorado he posted a photo of what looks like fog in the Rocky Mountains, but it’s actually smoke from the wildfires there. “The whole state of Colorado smelled like smoke,” he recalled.

Though he had traveled to some of the states on the mapped out route over the years, it was not even close to how many he passed through on the challenge. “It was quite the adventure. I had a few hiccups. Around day 8 I got a flat tire and it took me about three hours out in the middle of nowhere to find somebody to get it fixed,” he said.

A couple days after that, he lost the key to his motorcycle so he couldn’t get into any of his saddle bags as they were headed to one of the challenge’s checkpoints: Wilkinson’s Harley Davidson in Vermont. Though he could start his motorcycle with a code, he had a miserable day and a half with no extra clothing, nothing dry because it was pouring rain and his rain gear and heated gear was in his bags. Luckily, he has truck drivers who work for him at Gold Medal who go to that part of Vermont so he had his son give the driver his spare key to deliver to him in Vermont.

The navigation aspect was part of the challenge as they followed numbered directions with left and right turns onto roads and secondary highways with no cities or towns mentioned in the directions. “You have no idea where you’re going. You’re just looking for these random streets. I had about 260 miles of mistakes,” said Santos of a few wrong turns along the way. “Whenever you leave the route you have to go back to where you left. You can’t take a shortcut from somewhere else because if you do you’re disqualified.”

One of his favorite parts of the trip was traveling through the Mojave Desert in Nevada, though it wasn’t what it he expected it to be with vastly fluctuating temperatures from day to night. “We went through Monument Valley – that was beautiful. There were too many places to say I had a favorite,” he said. “It was amazing – it truly was.”

Head-on fatal crash between dump truck and convertible outside of Longmont...