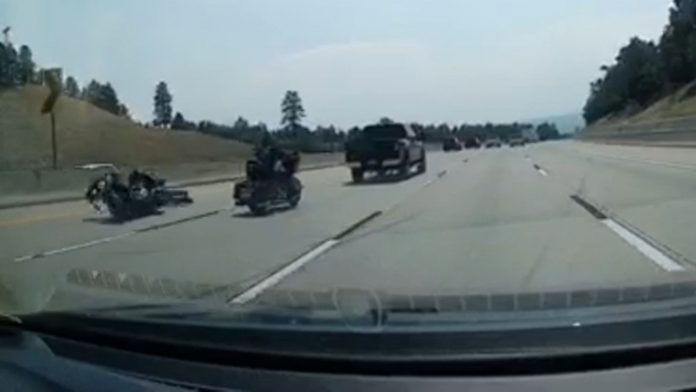 DOUGLAS COUNTY, Colo. (CBS4) – The family and friends of 54-year-old Quentin Quidley are grateful a suspected road rage attack didn’t end his life. It was all caught on video

“He has a fractured skull, a fractured face. His whole left face is all cracked up,” James Quidley, Quentin’s brother said.

This was not the outcome James had imagined when he planned a road trip with two of his other friends to see beautiful country following a motorcycle rally in Sturgis, South Dakota.

“We were traveling southbound on (I-)25. Traffic opened up, a black pick-up truck in front of us in left lane didn’t yield over so when we went around him. He floored his gas pedal.”

A passing driver caught the incident on a dash camera video. In it, viewers can see the driver of a black pick-up truck swerve into Quentin. The Quidley’s friend, Brad, followed the truck to get a license plate, ultimately the driver pulled over. “He was purposely trying to hurt him. If not, kill him,” said Brad. “He knew he didn’t have a helmet on. He didn’t have protection on. It was hot out, he was just riding in t-shirts,” he said.

Following the crash, several drivers came to help and slow down traffic.

“There’s a couple that had towels that we could comfort Quentin until the ambulance got there, it was very, very much appreciated,” their friend, Roger, said.

James tells us Quentin was initially in the trauma center at Sky Ridge Medical Center, but he improved and was moved to the intensive care unit. James is still getting over the shock of what happened to his big brother. He hopes this close call is a reminder of how much harm a driver can cause to a motorcyclist.

“I don’t know why that guy would do that, to try to close the gap on motorcycles just cruising through. We had wide open road in front of us. We were gone, there wasn’t no reason to do what he did,” James added.

CSP told CBS4 they talked with the truck driver and the incident is under investigation. No arrests have been made.

Residents use pick-up truck to block travellers moving on to playing...