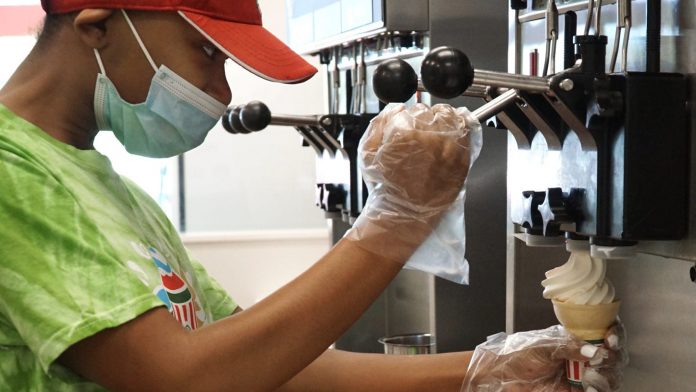 It was the family trips to eastern Pennsylvania that inspired Artesia and Theo Washington to open their first business late last month.

The Bloomfield Township residents would travel to see family and always stop by Rita’s Italian Ice, a chain serving up frozen custard and other cold delicacies. After finding out there weren’t any near home in Michigan, the two began the process of trying to bring the concept to metro Detroit. After two other Rita’s opened in Michigan, the couple opened the third, located in the shopping center at 11 Mile and Middlebelt in Farmington Hills.

“It was amazing. I had to have it every day,” Artesia Washington admitted. “Every time we went to Yardley (Pennsylvania), I went to Rita’s.”

The shop, located at 25836 Middlebelt, boasts a simple feeling but packs a lot of flavor. The storefront serves up Italian ice, a dessert made with ice and flavoring without any dairy product. The shop also offers a sugar-free option and some all-natural flavors, depending on the day.

Unlike other spots that strictly serve up frozen treats, the Italian ice served at Rita’s is fresh, made in the store on a daily basis. That constant rotation of product means new flavors are served every day.

“We have to throw it out after 36 hours,” she said. “This morning, we’re making at least six different flavors to complement what we did yesterday.”

Have a flavor you want made? Washington said she’ll take requests — if you call a day ahead of time. She said she’s gotten plenty of requests since opening in late July, especially for flavors such as root beer.

Custard flavors change regularly, with mainstays chocolate and vanilla always on the menu.

Launching in the 1980s in Philadelphia, the company operates hundreds of shops around the globe, with many along the East Coast.

She said they reached out to Rita’s about franchising six years ago, but said the company wasn’t ready to come to Michigan. Now, it boasts locations in Sterling Heights and Holland, with the Washington’s shop being the third. The two hope to open another store next year in Royal Oak as well.

They signed a lease agreement last summer and took a little longer to open because of COVID-19 delays, but opened the doors July 31. Artesia Washington said she’s seen plenty of customers who are excited to see the Rita’s brand come to the area and others who have never heard of it.

The shop is open noon to 9 p.m. every day and can also provide curbside service to those who don’t feel comfortable coming into the shop.

Artesia Washington said the shop is her way of trying to plan for the future and transition out of the healthcare industry, where she currently works, in the coming years. She said she worked on an ice cream truck with family in the past and has returned to serving up cold treats later on in life.

“When I was a kid, my mom and I worked the ice cream truck,” she said. “This is so different than what we have around here.”