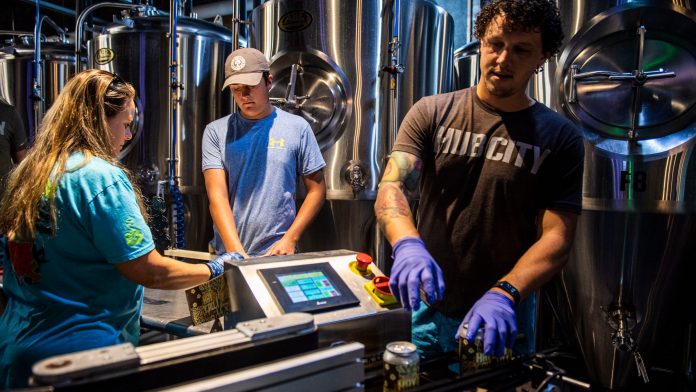 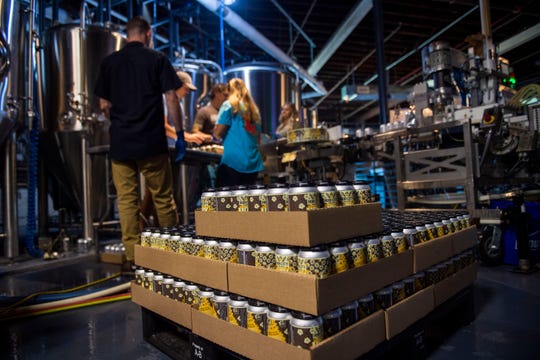 No longer will growlers or kegs be the only way to consume Hub City Brewing’s beer outside its downtown Jackson location. On Friday, the local brewery began canning its first batch of beer for direct distribution across West Tennessee.

“With us, you know you’re buying beer that hasn’t been sitting on a train, truck or ship,” he continued. “It’s going from our cooler to [a store’s] cooler to your cooler. It’s pretty quick.”

How Hub City Brewing’s beer is made into beer cans, Video

Hub City Brewing opened in January 2019, making it the first brewery in Jackson. It brewed all its beer at its Main St. facility, which also serves as a concert venue and gathering space.

Customers could then purchase it in-house by the pour or carry it out in growlers or kegs. 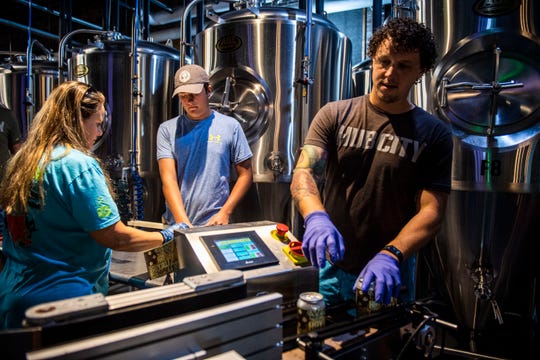 Nicholas Corley assembles the cans with Heather Corley, as Trevor Jones grabs them from the machine after they are filled with beer, capped, and labeled, this will be their first batch of beer for direct distribution across West Tennessee from Hub City Brewery in Jackson, Tenn., Friday, Aug. 7, 2020. (Photo: Stephanie Amador / The Jackson Sun)

In holding with its authenticity, all the canning takes place in the same space as the brewing. The cans are then packaged for sale at both Hub City and various local distributors.

During its first round of canning, Hub City brewed, canned and packaged 1,000 cases — or about 24,000 cans — of beer for distribution.

Corley said he expects the beer to be available at stores across Jackson and West Tennessee almost immediately. His goal, he said, is to reach people directly.

“Even though people have stopped going out, people haven’t stopped drinking,” Corley added. “We want to be able to drink our beer at small gatherings or a place like a river.”

Hub City had always planned to can its beer and expand beyond bars. 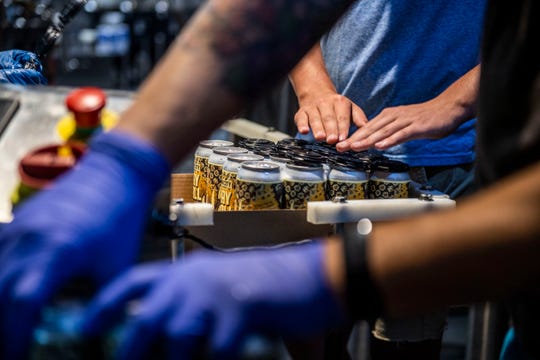 Nicholas Corley presses down on the caps as Trevor Jones passes them to him after they are filled, capped, and labled. This will be their first batch of beer for direct distribution across West Tennessee from Hub City Brewery in Jackson, Tenn., Friday, Aug. 7, 2020. (Photo: Stephanie Amador / The Jackson Sun)

“We’ve been selling kegs, but they’ve only been hitting the restaurant market,” Corley said. “We’ve always wanted to grow into cans so we could sell at places like convenience stores and grocery stores.”

Hub City is part of a more extensive beer and food distribution empire Corley is creating in the mid-South. He’s also the owner of Rock N’ Dough, the pizzeria-brewery with locations in Germantown, Jackson and Nashville. He plans to open more in Cordova and Nashville later this year.

Rock N’ Dough brews beer as well but is a distinct brand from Hub City Brewing, Corley said. However, Rock N’ Dough will sell Hub City beer as guest taps, and Hub City is separately brewing all of Rock N’ Dough’s beer at its Jackson location.

For Hub City, the canning also serves as an opportunity to generate some much-needed revenue. Corley said the brewery had been hit particularly hard by the coronavirus pandemic because of the inability to hold concerts, pushing traffic down. 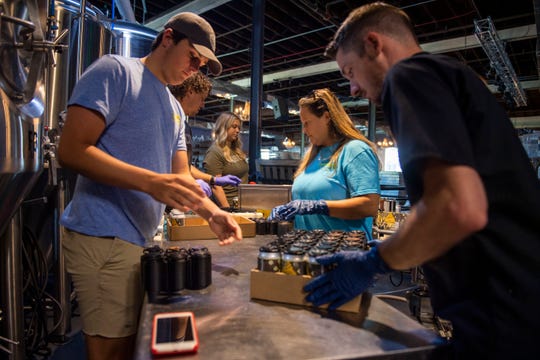 Cody Stooksberry, Brew Master, takes the beer cans from Nicholas Corley as he works together with Heather Corley, Trevor Jones in assembling cans together, this will be their first batch of beer for direct distribution across West Tennessee from Hub City Brewery in Jackson, Tenn., Friday, Aug. 7, 2020. (Photo: Stephanie Amador / The Jackson Sun)

“We really can’t wait to get back to normal,” Corley said. “I think everyone is ready for this to be over.”

Hub City’s first round of canning ended August 8; Corley plans to can another round of 24,000 beers Labor Day weekend.