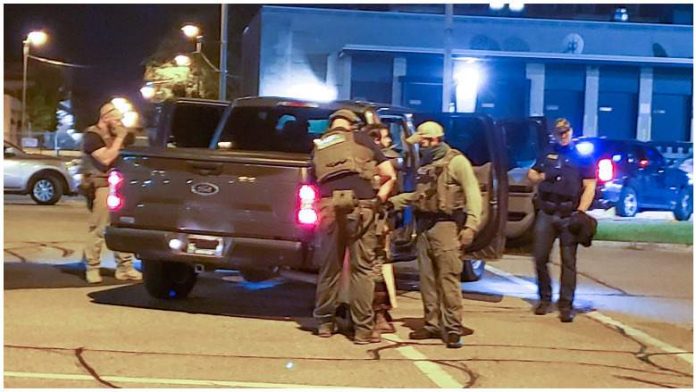 The same day President Donald Trump promised to send federal officers to quell unrest in Kenosha, Wisconsin, officers in unmarked trucks with blacked out license plates were visible on the streets of the city making arrests. You can see photos and video throughout this article. Although some of their vests read “police,” others indicated at least some were with the federal United States Marshals Service. Kenosha police said in a news release that U.S. Marshals were assisting them in some arrests on August 26.

The photos and video were taken on August 26, the day after shootings left two people dead in the streets (a 17-year-old police supporter named Kyle Rittenhouse has now been charged with homicide in those deaths; you can learn about those charges here.)

Trump wrote that same day: “We will NOT stand for looting, arson, violence, and lawlessness on American streets. My team just got off the phone with Governor Evers who agreed to accept federal assistance (Portland should do the same!) TODAY, I will be sending federal law enforcement and the National Guard to Kenosha, WI to restore LAW and ORDER!” The use of federal law enforcement in unmarked vehicles was very controversial in Portland.

According to CBS News, the White House announced August 26 that “1,000 National Guard and over 200 federal law enforcement personnel, which include members of the FBI and U.S. Marshals, will be deployed to Kenosha, Wisconsin.” DOJ wrote, “Working with the Governor and state and local law enforcement, the Department of Justice is deploying federal assets, including from the FBI and US Marshals, to assist in the response to the riots and unrest.”

We will NOT stand for looting, arson, violence, and lawlessness on American streets. My team just got off the phone with Governor Evers who agreed to accept federal assistance (Portland should do the same!)…

The shift in law enforcement tactics came in the wake of disorder that resulted in multiple major arson fires and property damage incidents throughout Kenosha, which has been rocked with unrest since the police shooting of Jacob Blake, which was captured in a viral video.

Here’s what you need to know:

Heavy went to Kenosha to observe what was happening for three nights – August 24, 25, and 26. The first two days, officers in unmarked vehicles with blacked out plates were not visible on the streets. On day 1, local officers seemed to be concentrated around the courthouse. They formed a line, while wearing riot gear, along the fence that was erected in front of the courthouse, which stands in front of a park where Black Lives Matter protesters and some counter protesters gathered.

People in both groups were openly armed. The officers on the first day also seemed focused on protecting fire scenes so that the Fire Department could go in to douse blazes that demolished everything from an office furniture store to dozens of cars to a local Department of Corrections office. On that day, people were seen smashing windows and setting fires, at a credit union for example, without any intervention from law enforcement. Not a single arrest was observed.

On August 25, the situation grew intense between law enforcement and protesters at the courthouse again, and the officers pushed people out of the park by advancing with vehicles and riot-gear wearing police. This resulted in standoffs and, eventually, people were disbursed into the streets, where they milled around, got into confrontations, and eventually the night culminated in the shootings. Again, until the shootings, no arrests were observed. The only fires observed were minor.

Although a curfew was in effect for 8 p.m. and then 7 p.m. on all of the days, curfew didn’t seem to be enforced, at least not widely.

On August 26, the scene in Kenosha was very different at the same time, roughly 8 p.m. through midnight. This time, there were no police guarding the courthouse, which still had the fence erected around the perimeter. Black Lives Matter protesters gathered in the park again, but this time the gathering seemed to stay peaceful. They then peacefully marched down the street to an intersection and then over to the shooting scene, where they offered tribute to one of the men who was shot and killed the night before.

The police tactics seemed to have changed. Instead of the visible confrontation at the courthouse, law enforcement presence seemed mostly confined to squads driving or sitting around and a number of unmarked trucks, some with blacked out license plates, that were stopping people and vehicles. These officers weren’t in traditional police uniforms. Many were dressed in brown and were wearing vests and masks. They took at least one person into custody who was carrying a broken stop sign.

Police confirmed in a press release that U.S. Marshals were assisting local police in arrests on August 26. The above video is from that arrest scene.

During the early evening hours of August 26, 2020 Kenosha Police Department received a citizen tip alerting us to several suspicious vehicles with out of state plates meeting in a remote lot near State Highway 50 and Green Bay Road.

Acting on this information Kenosha Police Offices located the suspicious vehicles and took up surveillance. Kenosha Police were assisted by the United States Marshals. The vehicles were a black school bus, bread truck and tan minivan. Kenosha Police confirmed the out of state license plates.

Police followed the vehicles to a gas station near Washington Road and 30th Avenue. Police observed the occupants of the black bus and bread truck exit and attempt to fill multiple fuel cans.

Suspecting that the occupants of these vehicles were preparing for criminal activity related to the civil unrest, officers attempted to make contact and investigate. The officers exited their vehicles, identified themselves, were wearing appropriate identification, and then detained the occupants of the bus and bread truck.

The minivan attempted to drive away; however, Kenosha Police stopped this vehicle and ultimately forced entry to the minivan and arrested the occupants.

READ NEXT: Radio Exec ‘Paddy Duke’ Fired After Past Accusations Of Murder Exposed

dynaCERT Looks Like Becoming A Winner From The Trend To Reduce...

Danger Zone: Everything you need to know about CSGO’s battle royale...