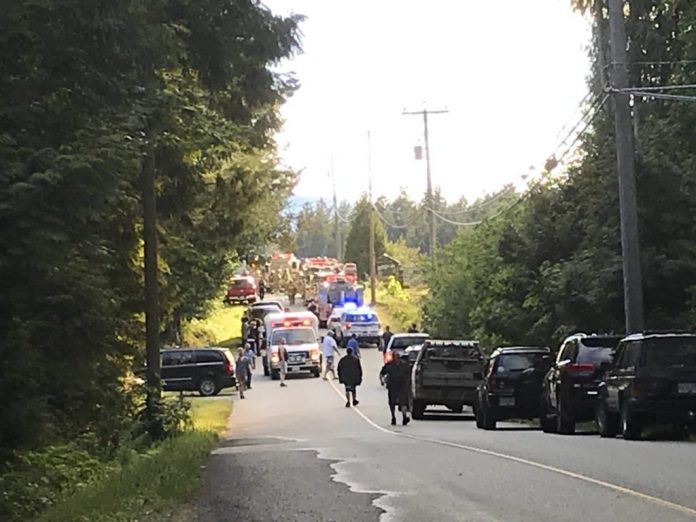 An Alberni Valley hobby farmer has lost his barn full of hay and farming equipment following a fire on July 16, 2020 that could be seen for kilometres away.

Fire departments from Port Alberni, Beaver Creek, Cherry Creek and Sproat Lake as well as multiple ambulances responded to the fire at Tooth Acres farm on McCoy Lake Road shortly after 7 p.m. on Thursday night. A BC Hydro crew was quickly on scene to cut power to the site. The barn, approximately 30 metres (100 feet) by 15 metres (50 feet), was full of hay that owner Fritz Zens and others had been cutting.

Everyone escaped the barn, Sproat Lake fire Chief Mike Cann said. He didn’t know if any livestock were involved, but a bystander said the cows that are usually on the property were out to pasture. A number of sheep could be seen in a field a few metres away from the barn fire.

“When I got into the barn there were flames everywhere,” said a farmhand who wished to remain anonymous. “I jumped into a tractor to try and get it out of there. By the time I got it in gear, the baler on the back of the tractor was on fire. So I jumped off and ran.”

One person was taken to hospital by ambulance, but no information on the person’s condition was available.

“It’s a total loss,” Cann said. “It definitely was full of hay on this end. I don’t know yet what the rest of the building was. It was bigger than just the hay part.”

Black smoke rolled hundreds of feet into the air, and small explosions could be heard occasionally as parts of the barn fell down.

“We have no hydrants out here, so we had to start tanking water,” Cann explained.

More than a dozen loads of water were dumped into the porta-tanks in the first 90 minutes of the fire attack. Pumpers went to nearby hydrants to fill up and would return to the site to fill the porta-tanks by rotation.

Crews will be on scene throughout the night extinguishing the blaze, making sure it doesn’t spread into the grass. “We’ll finish up putting the hay out; it gets a little stubborn at times. We’ll be bringing a machine in and pulling the tin roof back, and busting what’s left of the hay up so we can get it all cold so it’s not an issue.”

McCoy Lake Road will be blocked off from both directions in the 7,400-block and drivers are asked to avoid the area.

A barn burned down on a hobby farm on McCoy Lake Road on Thursday, July 16. (SUSAN QUINN / ALBERNI VALLEY NEWS)

A firefighter waters down a pair of silos standing next to what remains of Fritz Zens’s barn at Tooth Acres Farm, west of Port Alberni, on July 16, 2020. (SUSAN QUINN/ Alberni Valley News)

A barn at Tooth Acres Farm on McCoy Lake Road west of Port Alberni, B.C. was full of hay when it caught fire in the early evening of July 16, 2020. (SUSAN QUINN/ Alberni Valley News)

A firefighter waters down a pair of silos standing next to what remains of Fritz Zens’s barn at Tooth Acres Farm, west of Port Alberni, on July 16, 2020. (SUSAN QUINN/ Alberni Valley News)

The 1990s Were The Age Of The Muscle Truck: Video