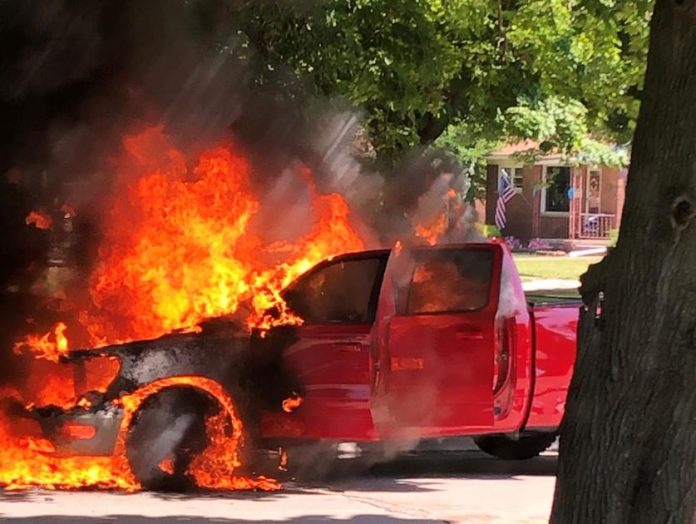 Vehicle fires can look really dramatic, but fortunately drivers usually have enough warning before a blaze gets completely out of control.

Click here and then look to the right side for the sign up to the morning newsletter for The News Herald, and you can get the top headlines de…

That was the case at about 11:15 a.m. July 1, when a Dodge pickup truck erupted into flames near the intersection of Fox and Moore in Allen Park.

A nearby resident said the owner was driving at the time, having just left a house on Fox Avenue. The driver turned onto Moore, which is when the fire started.

The driver was able to get out in time and without being injured, but it left neighbors wondering if it was an electrical fire, or a leak of some kind that started the fire. No explosion was reported.

“The tree he parked next to took a hit,” the resident who witnessed the incident said. “And there are electrical lines that run through the trees on that side of the street. We were concerned about those being damaged.”

Fire Chief Douglas LaFond said the report he had did not indicate a possible cause, but added that were no reported injuries, nor damage to electrical lines.

In the summer heat, people naturally find relief in and around the water.

A 22-year-old Southgate man is dead after he lost control of his vehicle and crashed into a Lincoln Park appliance store.

A mother and daughter who disputed charges at a nail salon allegedly teamed up to attack a manager.