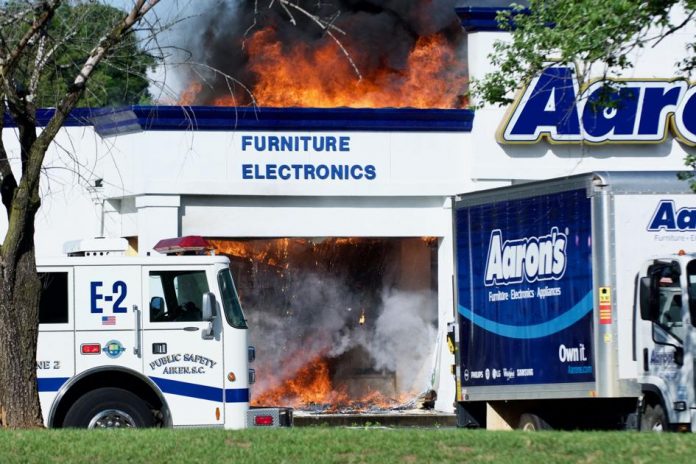 A fire tore through the Whiskey Road Aaron’s on Wednesday evening, and a portion of the furniture-and-appliances store collapsed.

Exactly what caused the fire is not immediately clear, first responders said. No one was hurt, they added.

The Aiken Department of Public Safety responded to the fire with a ladder truck, which was used to douse the flames from above – an ideal situation, Public Safety Lt. Jake Mahoney said, in light of the partial cave-in.

Flames were seen on the roof when crews first arrived.

A handful of people watched the dramatic scene from the curb of Americas Best Value Inn and from the parking lot of nearby Hobby Lobby.

Whiskey Road was shut down completely as crews fought the fire. Aiken County Sheriff Michael Hunt and S.C. Highway Patrol were on scene, as well.

Colin Demarest covers the Savannah River Site, the U.S. Department of Energy, the National Nuclear Security Administration and government in general. Follow him on Twitter: @demarest_colin

Man quoted £900 to renovate kitchen does it himself for just...

Surging Investments Towards Innovation to Spur the Growth of the Heavy...