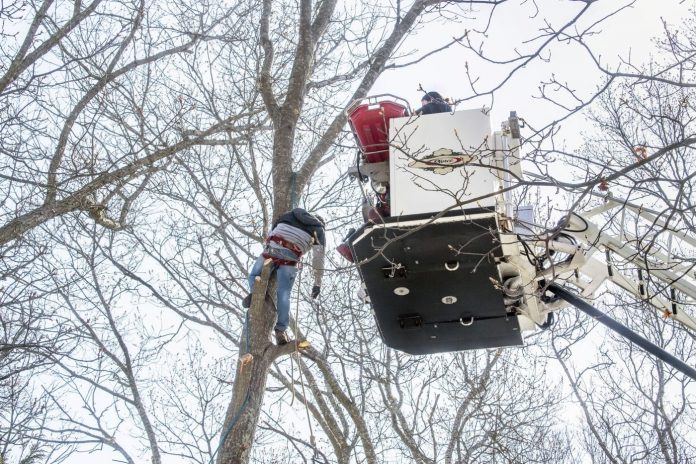 A man suffered a significant head injury while doing work 30 to 40 feet up in an oak tree in East Hampton and was airlifted to Stony Brook University Hospital after being rescued from the tree on Saturday morning.

The East Hampton Fire Department used its tower ladder to reach the semi-conscious man, according to Chief Gerard Turza Jr. The man, whom the chief described as a landscaper performing tree work in the old section of the Oakview Highway trailer park just after 9 AM, was wearing a rope safety system that stopped him from falling when he was hit in the head by a large branch he cut above him.

His fellow workers on the ground called 911. The East Hampton Village Ambulance Association and East Hampton Town police received the call first and quickly asked for help from the Fire Department. From the ground, the chief could see that the man, slumped over, was bleeding and had significant injury.

The man’s name was not released.

“As he started to regain consciousness, he was starting to fumble around with it and our fears were he was going to disconnect himself from the safety rope,” Chief Turza said. They tried to shout out up some simple commands, in Spanish, as the man only spoke Spanish.

The department’s tower ladder, which can extend up to 100 feet, hoisted two firefighters and a paramedic with the East Hampton Village Ambulance Association up in the enclosed elevation platform to assess the man and bring him down. Since he was still able to move his legs, they were able to move him inside the bucket and then disconnect his safety lines.

Emergency medical service personnel treated the man, once on the ground, and then transported to East Hampton Airport, where a Suffolk County medevac waiting to fly him to Stony Brook University Hospital, the closest level-one trauma center.

There were several challenges, the chief said, including working in a confined space at a high elevation with a patient who was somewhat combative due to the head injury.

Chief Turza said the two agencies have practiced this kind of scenario and they worked seamlessly together to execute the rescue. They have practiced packaging patients at various elevations.

“The fire department does an amazing job, and it really is a privilege working side-by-side with them,” Lisa Charde, the chief of the ambulance association, said.

Another challenge that presented itself was the narrow streets within the trailer park. The chief said the ladder truck’s chauffeur did an excellent job  of navigating the tight street and positioning the truck. Fire police personnel cordoned off the entire park to traffic during the rescue.

Also, first responders are taking extra precautions due to the COVID-19 pandemic. All firefighters are wearing masks, either N95 or surgical ear loop depending upon the tasks they are performing, Chief Turza said. In addition, the department had to extensively decontaminate the turnout gear belonging to the two firefighters in the tower platform, as well as an additional firefighter who helped remove the patient from the truck to the ground. “We also had to decon the tower platform itself and other equipment due to the blood,” he said.