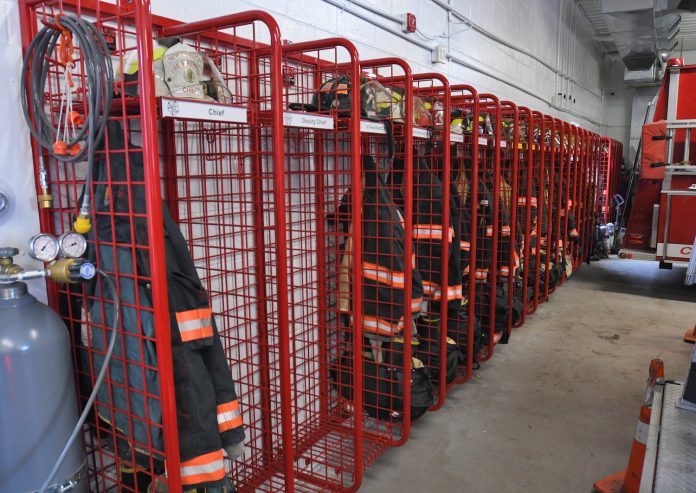 NEW LONDON — The New London Volunteer Fire Department is welcoming a new rescue truck and a new addition to their fire house.

The new addition is expected to be finished soon, according to Fire Chief Gene Carey. The new truck is already in service, with plans to eventually use it to fight brush fires as well.

“We’ve got 5 trucks in a four-stall garage,” Carey said of the need for the new addition at the fire station on Cornell Street in the outer district of Rome. “I don’t need my guys trying to squeeze the trucks in there, especially not a brand new truck.”

The 24-foot by 40-foot addition is being built by Shafer & Sons out of Westmoreland, at a cost of about $39,000, the chief said. Along with providing more room for apparatus, the new addition will include a wall of lockers for the volunteers.

“That way our guys will come in, they’ll have the whole wall full of gear lockers right there. They can jump into their lockers, get the gear and then go jump into the truck,” Carey explained.

The new addition has been in the works for about three years, the chief said. That’s when an old storage building on the back of the property blew down in a wind storm. Insurance money from that old building has been used to pay for the new addition.

“We didn’t want to rebuild back there. So we decided to use the money and put the addition in up here,” the chief said.

Money leftover from the insurance payout has also gone to the new rescue truck, a 2020 Ford F-550 with a diesel engine and a 4-door cab. Carey said the firefighters have also been chipping in money for the truck over the years, and the extra insurance money helped put them over the top. The new truck cost about $63,000.

“The truck money was money we kept putting into a truck fund,” he stated.

The new Ford replaces a 1997 Chevy Tahoe. Carey said the old truck is being gifted to a firefighter who did all the maintenance work on the truck over the years.

“He never charged us for any of the maintenance on it,” Carey explained. “We decided that he’s done enough for us that we’d give it to him.”

The truck was purchased from the Carbone Auto Group, JPJ Electronic Communications in Yorkville installed the emergency lights package and A&P Master Images in Utica attached the decals.

Along with the new building space and the new truck, Chief Carey said the department has also purchased a new harness for lifting patients. He said he read an article online about a man in Des Moines who built the lifting harness, so he wrote to the man and got one for the department.

The canvass harness will be used to slide under patients who need a lift assist. It comes equipped with handles for easier lifting by firefighters.

“It’s a lot better than a bed sheet,” which might normally be used in a pinch during a lift assist, the chief explained.

The new harness is not yet in service because Carey said he needs to make sure everyone is trained on its proper use.

Commentary: Moving into residence during a pandemic – The Aquinian