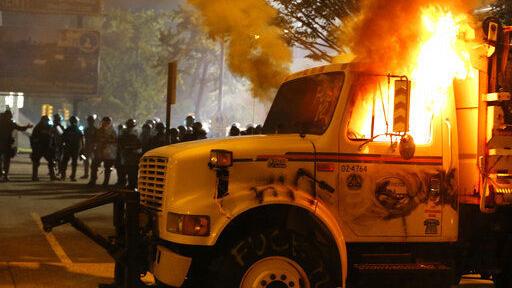 RICHMOND — A city dump truck was set on fire as protesters faced off with police in Virginia’s capital during a demonstration billed as support for protesters on the other side of the country in Portland, Oregon. College buildings and other property also were damaged.

Virginia State Police and Richmond police said they worked to clear the crowd of a several hundred demonstrators late Saturday that had ripped down police tape and moved forward with lasers and firecrackers. City police declared an unlawful assembly around 11 p.m., and what appeared to be tear gas was deployed to disperse the group.

The Richmond Police Department said Sunday that six men among the protesters were arrested and face various charges, including unlawful assembly, rioting with a firearm and assault on a law enforcement officer.

Police tweeted a photo of rocks, batteries and other items the department said were thrown at its officers during the protest. A video also showed an officer extinguishing a mattress on fire in the middle of a road.

More than 80 windows were shattered at Virginia Commonwealth University’s Monroe Park campus during the protest and dozens of buildings were damaged or tagged with graffiti, school President Michael Rao wrote on Sunday. Rao said the monetary damage is more than $100,000, the Richmond Times-Dispatch reported.

“VCU supports free speech and stands in solidarity with those peacefully expressing messages of social justice and equity for all people,” Rao wrote to the campus community. “VCU does not condone — under any circumstance —acts of violence or vandalism, regardless of the purported cause.”

Protesters had been planning for days the demonstration that was called “Richmond Stands with Portland,” news outlets reported, in an apparent reaction to ongoing tensions between protesters and U.S. agents at the federal courthouse in Oregon’s largest city.

Weeks of nationwide unrest have struck several U.S. cities since the death of George Floyd in Minneapolis on May 25.

At a Sunday news conference, Richmond Police Chief Gerald Smith said that a flier highlighting the event came from outside the city. Smith said that some individuals who attended Saturday night have been identified as being from both left-wing and right-wing movements. Smith said they are reviewing video to determine if they can identify additional perpetrators.

“It’s clear that this group that came [Saturday night] came in order to bring violence and disruption to the city of Richmond,” Mayor Levar Stoney said.

Stoney praised local Black Lives Matter leaders, who he said have been involved in peaceful demonstrations for weeks, for not encouraging members to participate in the event.

Saturday’s protest in Richmond started at a park and then demonstrators marched to police headquarters, according to news outlets. Virginia State Police said in a tweet that protesters ripped down police tape and had lasers and firecrackers, then retreated and dispersed about 15 minutes after the agency “deployed chemical irritants.”

Smith said that officers continued to pursue a dwindling number of protesters through the city until after 2 a.m. Sunday. The city’s fire department put out the dump truck fire and responded to several other dumpster fires during the night.