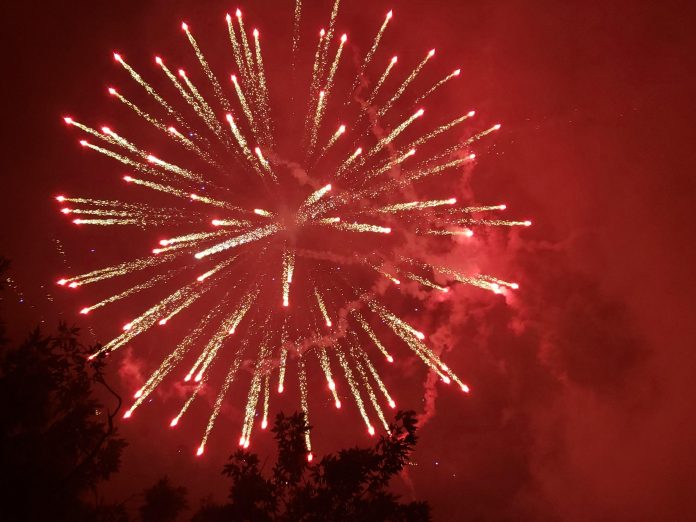 An afternoon rain shower didn’t dampen the spirits of the Byesville Volunteer Fire Department during their inaugural Byesville Firemen’s Festival held Saturday at the village park.

The festival, which is planned to become a yearly event according to Chief Tim Harmon, is being held as a means for the department to raise funds to purchase a new ladder truck. With the cost of a new ladder truck at $425,000, raising the funds for it is expected to take a couple of years. Haren also noted that the event is also held to show gratitude to all the department’s supporters.

The event kicked off at 6 a.m. with a 5K in which several of the department’s members walked in full turn-out gear.

Firefighter Doug Kenworthy said he was shocked at the number of entries for the first show.

Immediately following the car show, a parade featuring local law enforcement such as police, Ohio State Highway Patrol, and the sheriff, along with fire trucks from neighboring communities took place down Main Street. County officials also took part in the parade throwing candy out to children who lined the parade route.

“We quickly realized that a few changes will need to be made for the second annual Byesville Firemen’s Festival slated for June 25th and 26th, 2021,” Haren said. “The car show will be placed into the Byesville Village Park and we’re going to make an attempt to figure out the parking for the event. Conversations of setting up shuttles if need be may develop.”

After the parade, event goers headed to the Byesville Village Park for a variety of activities including live entertainment, a dunking tank, miniature golf, food and craft vendors, and Touch-A-Truck.

The Touch-A Truck was cut short when a sudden rain burst moved over the area and the firemen’s water battle ended up cancelled due to the rain.

Later in the evening, after the rain passed, the park filled with people taking part in the entertainment and activities. Families played together on the playground and teens and young adults enjoyed playing basketball and passing footballs.

In addition to food and entertainment, the event featured a 50-50 drawing, which brought in $294.

Patriotic clothing trended for the day as families walked through the event dressed in matching red, white, and blue clothing.

The highlight of the event began at 10 p.m. when a medley of patriotic songs mixed with some classic work tunes played along as hundreds of people lined the hills in the park to watch the fireworks display.

“The Byesville Firemen’s Festival went very well considering the weather and the hesitation of COVID-19. However the support was overwhelming for us as many folks came out and supported us. Even during the downpour, supporters remained at the vVillage park,” Haren said. “The Byesville Volunteer Fire Department greatly appreciates the community’s continued support. If you would like to be an event sponsor, or give contributions to the Byesville Firemen’s Association, please contact us at 740-685-6222.”