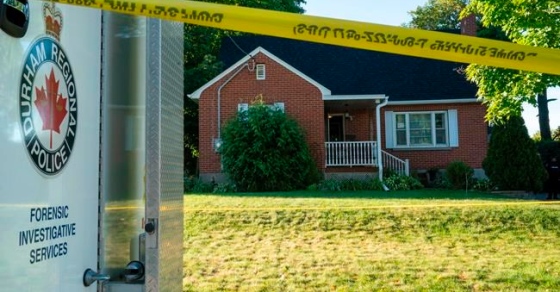 Police tape surrounded the brick bungalow by the time the sun rose over a quiet, misty morning in Oshawa, Ont. — a far cry from the scene Durham officers arrived to shortly after 1:20 a.m.

“It was a quite a chaotic scene. Even for the residents in the area, a lot of callers (were) calling in stating that they were hearing a lot of gunshots, a lot of screaming coming from this residence,” Const. George Tudos told reporters.

Tudos said the suspected shooter died of a self-inflicted gunshot wound, and officers aren’t looking for any other suspects.

Two of the deceased, he said, were under the age of 18. Four were male and one was female, he said.

The surviving victim, who’s now recovering in hospital, is a 50-year-old woman.

Tudos said responding officers also heard gunshots and a “commotion” when they got to the home, but did not immediately go inside.

“It wasn’t until our tactical support team attended that they were able to safely enter the residence, and that’s when they made that grisly discovery of five deceased parties,” he said. “It has shaken up a lot of the officers.”

By the late morning, groups of neighbours were outside having conversations about what had happened.

Police were seen towing away a pickup truck with Manitoba licence plates, which some neighbours said they hadn’t seen parked at the residence in the past.

Later in the day, a stretcher was laid out on the driveway as workers suited up in protective gear in preparation to remove the bodies.

People stopped by the house to drop off flowers in memory of the family, and passersby stopped in their cars to take a look at the crime scene.

But in the afternoon, police tweeted that they had found an “unknown device” in the house, and were securing the area as a precaution until they figure out whether it’s safe.

Liz McIntosh, who lives next door to the family, said she woke up to the sound of gunshots and screams, and saw police approach the property with their guns drawn.

“It’s horrible. You never would think that this could happen, especially this neighbourhood. It’s very quiet,” she said, noting that most families have lived there for years.

“This is a very peaceful neighbourhood,” said her husband, Cliff Chow. “Most of the time we don’t lock the doors.”

McIntosh said she heard the shots ring out over a period of 20 or 30 minutes.

“I feel awful for this family, how heartbreaking. It’s just horrible,” she said, adding she was also afraid for herself.

“I was afraid for us. I didn’t know when it was going on if there was a shooter running around the neighbourhood trying to hide, maybe they would come kick through our door?”

Carol Gibson, who lives down the street from the crime scene, said she was startled awake by the incident.

“The first shot woke me up, and then I heard about four or five more after that,” Gibson said in an interview. “Then a woman screamed and there were two shots after that.”

Gibson said she had known the family in the house for around 20 years.

“They were a family that cared for each other quite a bit,” said Gibson. “If they weren’t playing baseball, hockey or shooting hoops on the driveway, they were out raking leaves and they did it as a family. A very caring family.”

Gibson said nothing like this has happened on the street before.

A forensic team arrived on the scene Friday morning and will assist the force’s homicide unit with the investigation, Durham police said on Twitter.

This report by The Canadian Press was first published Sept. 4, 2020.

—with files by Jake Kivanç in Toronto.