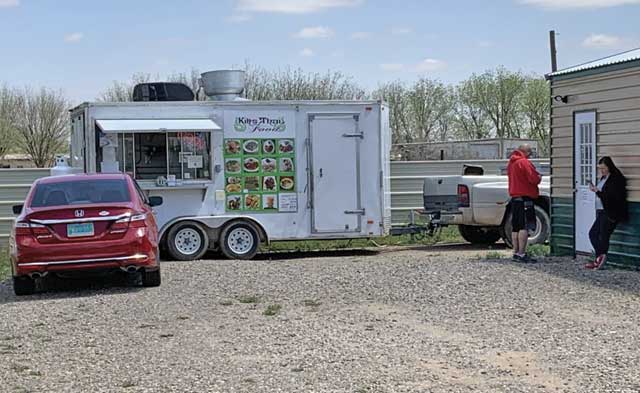 Some local food truck operators support a state government decision that allows food trucks to operate at rest areas during the COVID-19 emergency, but they also said that they don’t know whether the option will benefit Chaves County or established businesses.

The New Mexico Department of Transportation announced Friday that the state had received approval from the Federal Highway Department to allow food vendors and food truck operators to set up at rest areas along roads and highways to provide food to truckers and others required to travel.

The decision is meant to benefit both businesses and truckers, who don’t necessarily want to venture off main roads now, not knowing what might be closed or unavailable, said Marisa Maez, communications director for the state Transportation Department.

“It is two-pronged,” Maez said. “It was an option we wanted to provide. We have left our rest areas open so that our truckers have a place to stop, a place to rest and a place to use the restrooms. We have increased all our cleaning regimens there. This just seemed like a logical way to help if we can. If the food industry is allowed to stay open, then we just want to help those businesses and also help the truckers.”

She also added that some food trucks have had to leave their usual spots, including at breweries, that also have been ordered closed except for deliveries or take-out.

Angelo Armijo of the Department of Transportation said that a one-page application has been created and that applications will be approved without cost on a temporary basis during the COVID-19 crisis. The applications can be obtained from Armijo at 505-372-8757 or angelo.armijo@state.nm.us.

As of Tuesday afternoon, an application for a rest area location had not yet been received, according to state employees.

A few local food truck operators said that they think the idea is a good one, but added that they don’t think it makes sense for Roswell-area businesses or ones already established.

“We have a good location. We are pretty happy where we are,” said Travis Johnson, an owner of Kik’s Thai Food. It is usually located on a lot on South Main Street near East Mountain View Road.

Elizabeth Luna, owner of Luna’s Snacks and More, said she has been operating at the same site on South Main Street near Deming Street for almost 10 months and that customers are used to seeing her there.

Johnson and Luna said that rest areas could make sense for start-ups, but another restaurateur and food truck owner said that many parts of New Mexico, and especially the Roswell area, may be too remote for the concept to be attractive to business owners.

“I just don’t think there would be enough traffic in this area,” said Kerry Moore, co-owner of Chef Toddzilla’s Gourmet Burgers, which has its physical location on Twin Diamond Road. “It might make more sense in the oil patch area, but, even there, the workforce has been cut a lot already.”

She and the other business owners said they do welcome any effort to make it easier for food trucks to operate at this time.

“We want to support our local food trucks,” said Moore. “They have a small footprint, but they are important to people and the area.”

According to a New Mexico Transportation Department document, there are two state rest areas near Roswell. The Mesa Rest Area is north of Roswell on U.S. 285 heading toward Vaughn. The Waldrop Rest Area is east of Roswell near Caprock on U.S. 380.

But Google maps also shows additional rest areas on U.S. 70 heading toward Portales, on U.S. 280 heading south toward Dexter, and near Maljamar and Tatum.

Thank a Trucker team to serve up free meals May 1...