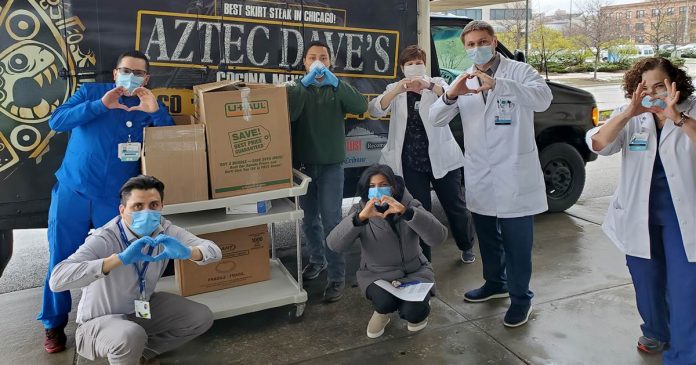 Some food truck owners are leaving their usual lunchtime spots behind to feed health care workers on the front lines of the COVID-19 pandemic.

Ramon Torres, co-owner of Aztec Dave’s food truck in Chicago, has been delivering meals to essential workers since an anonymous donor made the suggestion in mid-March. Torres agreed and said he is grateful he can keep his business going while aiding medical and grocery store employees.

He has delivered freshly made tacos and rice to several different neighborhoods in the Chicagoland area, he told NBC News.

“My business took a hit, but at the end of the day, that’s not really important just because we’re so grateful to be able to execute this initiative,” he said. “Everyone we deliver to has been ecstatic about it.”

Aztec Dave’s is joined by a handful of food trucks around the country that are giving free meals to essential workers.

New York food truck owner Najee Saunders crowdsourced his funding on social media. He posted to his Facebook and Instagram pages asking for donations and raised $2,500 to feed essential workers with his truck called “Remix Kitchen.”

Saunders said he not only knows medical workers caring for patients, but he also had a family member pass away of COVID-19. “I wanted to do my part in this crisis,” he said.

He would like to continue providing meals, but his operation depends on donations via social media. So far, his truck has fed Caribbean-inspired meals to workers at Mt. Sinai Hospital, Coney Island Hospital and Sloan Kettering Hospital.

“As long as this pandemic is happening I’m just happy to give them a sense of relief just for a little while,” he said.

As the severity of the COVID-19 pandemic became more apparent, Steve Carlson, the CEO and Founder of “Food Smackdown”, an organization that works with food trucks in Southern California, realized the industry would take a hit, and he wasn’t sure how they would recover.

He reached out to some of his food truck partners, including Hector Ramos, the owner of “Kala Truck,” who specializes in Mexican cuisine, to see if he’d want to help cook and deliver meals to health care workers.

“It helps us because business is a little bit down so it helps to keep us busy while also providing meals for the nurses. It’s a win-win,” Ramos said.

Once Carlson had the support of food truck owners, he created “Feed the Frontlines OC,” an organization that prepares meals on food trucks parked at hospitals and delivers the food to workers at no cost. Carlson said the organization serves two purposes, it allows the community to give back to their health care workers as well as help food trucks “keep their doors open.”

Amy Daugherty, the Chief Philanthropy Officer at St. Joseph Hospital Orange in Orange, California, is in charge of donations.

The caregivers “feel so loved by the community,” she said. “When you really think about what they’re doing, they’re really kind of feeding the soul of our caregivers.”

Paul Brozen, a vendor of vintage cars for movie and television sets, realized the film industry typically uses mobile kitchen trucks to feed hot gourmet meals to large groups of people on location. Why not bring the trucks to hospital parking lots and feed workers?

With the help of his children, Brozen created a GoFundMe page called ”Film Industry Feeds the Frontlines,” a grassroots organization that encourages members of the film industry to donate money that he and his group of workers can use to purchase, cook, and feed health care providers at no cost to them.

He said the average donation, mostly from members of the film industry, was around $200 but one A-list actor who wanted to remain anonymous donated $15,000.

Brozen told NBC News’ Social Newsgathering team his goal was to “provide what I normally get on set, a nice meal.”

The first week they were up and running at NYU Winthrop Hospital on Long Island, where they served grilled chicken one day, flank steak with potatoes and vegetables another day, as well as an Italian special that included meatballs and ziti.

Brozen said he was happy to help out those working hard to help fight COVID-19 but added, “it’s not about me, it has nothing to do with me, it’s about helping other people. It’s about seeing a problem and figuring out how we could help.”

Providing the right data to speed up truck service