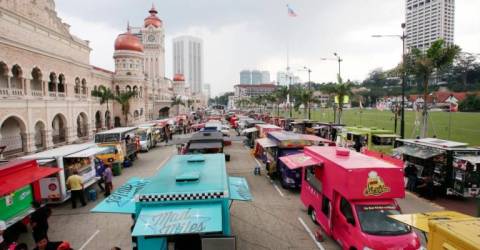 PETALING JAYA: The large lunch crowd that used to patronise food trucks before the Covid-19 pandemic have dwindled significantly.

Most of them are now packing food from home when they go to work every morning, according to Hamidah Salleh, who sells rice and dishes from a food truck here.

As a result, the ubiquitous food truck, which proved to be a popular alternative to coffee shops and hawker stalls, are now seeing a significant drop in business.

Many people have seen their salaries reduced due to the economic fallout caused by the crisis and are doing everything they can to cut costs.

Hamidah said business has dropped by about 55% despite more people returning to work.

Food trucks were allowed to resume business in mid May but it has yet to pick up.

Hamidah said she and her helper have observed the standard operating procedures, such as putting on face masks and gloves.

“Yet, the numbers are low,” she told theSun yesterday.

She said she had not raised prices “but people are just not spending”.

Zaffarudin Harris and his wife, who sell tea time treats, said he is still getting about the same number of customers but now they are spending less.

“They used to spend RM10 to RM12 on tea time treats for friends and themselves but now they spend only half of that.”

This has forced him to reduce the variety to cut cost.

“I have three school-age children and I need to ensure that there is enough money to meet our monthly expenses.”

Zaffarudin said he used to make about RM140 a day but now he is lucky to get even half.

To make things worse, he still has to pay the instalments on the loan he took to buy the truck.

The moratorium that was recently announced does not cover loans taken from credit companies.

Burger seller Hisham Hussein has moved his opening time from 6pm to 4pm, in the hope of getting more customers to make up for the drop in business.

Despite that, he is only making 50% of what he used to earn.

Hisham said he used to get many customers from the entertainment outlets but there are few customers now because these outlets are not allowed to resume operations yet.

“I hope to see some recovery when cinemas reopen,” he added.

Revellers turn their pick-up truck into a pool but regret it...