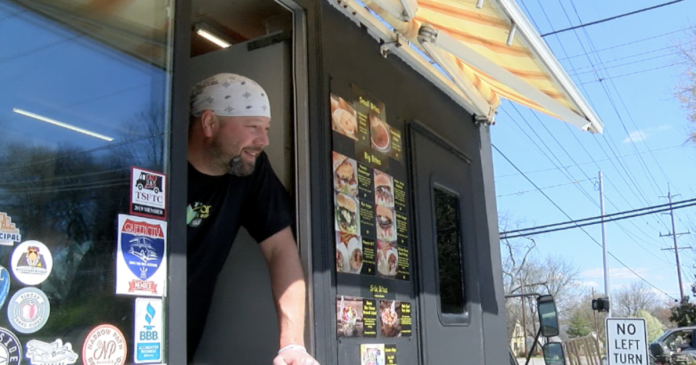 As of April 10, food truck operators can serve food at rest areas that are maintained by the Ohio Department of Transportation.

O’Neil said food trucks have been setting up in certain neighborhoods to bring meals closer to people who don’t necessarily want to cook or go to the grocery store.

“I think it helps provide some normalcy in this kind of weird time that we are living in … to come over and grab some food and act like you are kind of at a restaurant,” O’Neil said.

“A lot of our trucks work at breweries, a lot of them will supplement their income by picking up brewery locations, so we wanted to try and make sure that they kept working,” Lange said.

The Neighborhood Initiative has allowed the food truck industry to hire some people from the hospitality industry who are out of work, Lange said.

Food trucks are visiting six to eight different locations on a rotating basis. The app Foodeaze has a truck locator map that shows where the food trucks are on any given day.

O’Neil said his food truck, known for its Southern flavors and pimento cheese, has been especially well received during the stay-at-home order.

“Everybody seems excited about it,” O’Neil said. “I immediately had people come from across the street. I had some of their employees call their family members and they came down.”

Ty Velez, owner of AJ’s Cheesesteaks, said the truck usually sets up in the BP parking lot on Montgomery Road in Norwood.

Velez is among the food trucker operators participating in the COVID-19 Foodie Fund, an initiative to raise money to feed first responders and healthcare workers on the frontlines of the pandemic.

“We want to take some units up to feed the nurses for free … we’re going to take food trucks up to the hospitals to feed those first responders that are on the front lines,” Velez said.

Click here for more information on the COVID-19 Foodie Fund.

Shop These Vegan Brands This Weekend and Help Raise Money for...