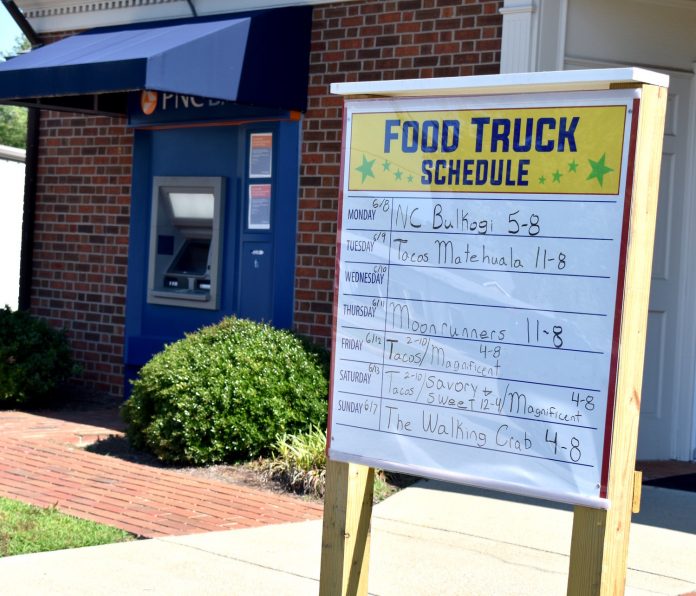 BAILEY — Residents agree a buffet of food trucks beefs up the town’s economy and provides a broader menu, but the ultimate cost is still on the table.

Of the dozen residents who spoke during a public hearing on the matter Monday night, not one said he or she didn’t want food trucks in town. But concerns over how the popular trucks are affecting local restaurants came up repeatedly during the 45-minute hearing.

The food truck craze kicked off in Bailey about six months ago when Mayor Thomas Richards asked a food truck owner in Wendell to give Bailey a try. Now a different food truck is in town every day with a posted schedule outside the old PNC Bank building on Deans Street. The trucks use the property’s parking lot. A sign lets folks know when their favorite wheeled vendors will be in town.

Food trucks proved to be a near-perfect business model in the wake of the coronavirus pandemic and resulting statewide closure of restaurant dining rooms.

Richards said food trucks provide more options for residents and attract out-of-towners, which is good for the town’s struggling economy.

“We used to have three breakfast restaurants,” Richards said. “Competition is a good thing. We’re not picking winners and losers.”

Tacos Matehuala, the most frequent visitor in the ongoing food truck rodeo, is permitted in Wilson County, which raised some eyebrows in Bailey. But the food truck is free to operate anywhere in the state, Nash County Health Director Bill Hill said earlier Monday.

Hill gave the example of Bill’s Barbecue in Wilson. Before the eatery closed its doors, Bill’s catered events across the region using its Wilson County permit.

It’s customary for an out-of-county food vendor to check in with the local health department. Tacos Matehuala didn’t do that, but when health officials reached out to the owner, he provided all the necessary paperwork, Hill said.

Richards said the owner of Tacos Matehuala has been great, operating in town two or three days a week. The owner has mentioned plans to possibly rent the old Bailey Cafe building.

Resident Tammy Bissette said her family ate at El Paso earlier in the evening. She said she supports restaurants and food trucks.

Resident Michelle Sunday said she picked up dinner at El Paso earlier as well. She said she goes to Wilson and Zebulon for variety. The food trucks bring the variety to town. She said it also brings new people to Bailey.

“I work with people in Wilson who live in Raleigh and they had never even heard of Bailey,” Sunday said. “I told them about the trucks, and now they come through Bailey to pick up food for the family on the way home.”

Those same folks are stopping at Dollar General and gas stations in town, Sunday said.

“I think you should set a fee, but I don’t want it so high it becomes a barrier to entry for the food trucks,” Sunday said.

Bailey Chamber of Commerce President Cecil Hawley said food trucks as they operate right now don’t support the town. He caused a stir over the weekend by posting on the chamber’s Facebook page that food trucks take business away from the town’s brick-and-mortar restaurants.

Hawley once owned the property where the town’s chief restaurant El Paso operates. Hawley said he owned and operated a restaurant at the location years ago, but had long since sold the property.

“I have no financial connection to El Paso,” Hawley said. “I’m the chamber president. I want businesses invested in Bailey to be successful.”

Hawley said a food truck could pick up and go somewhere else at any time and that the mobile eateries are by their nature not invested in the Bailey community.

Town Planning Board Chairman Walter Wells said he found a lot of misleading information on social media over the weekend. He said the town board hasn’t decided what to do yet, that’s what its members were in the process of deciding.

“There was a whole bunch of crap out there and it was misleading,” Wells said.

The town doesn’t have an ordinance regulating food trucks, but it needs to have something in place, Wells said. He provided the town’s Dollar General as an example.

“I wish we had a Dollar General that looks like the one in Sims,” Wells said. “But there was no ordinance with facade requirements when the Dollar General was built and it’s sideways.”

Ike Bullard, who owns the old PNC Bank property where the food trucks gather, said it’s been great for local commerce. He said folks will purchase food at a truck, walk over to Dollar General to buy a drink and then purchase gasoline on the way out of town.

Bullard said the trucks pay him a fee, which is keeping the grass cut and the taxes paid. He has plans for the old bank building that don’t involve a restaurant.

Several regular food trucks take turns different days of the week offering Mexican, seafood, barbecue and more. Other trucks fill in gaps. So far there’s been around 60 trucks at the property over the last six months, Bullard said.

Wells laid out options for commissioners at last month’s meeting. He surveyed surrounding towns to develop a list of recommended requirements for food truck operators. That list includes parking in certain locations, obeying set business hours and providing access to a restroom, among other rules. Wells recommended requiring food trucks to purchase a permit from the town for $100 a month or $1,000 a year.

Richards said the Bailey Board of Commissioners would discuss the matter further during its regular monthly meeting next week.