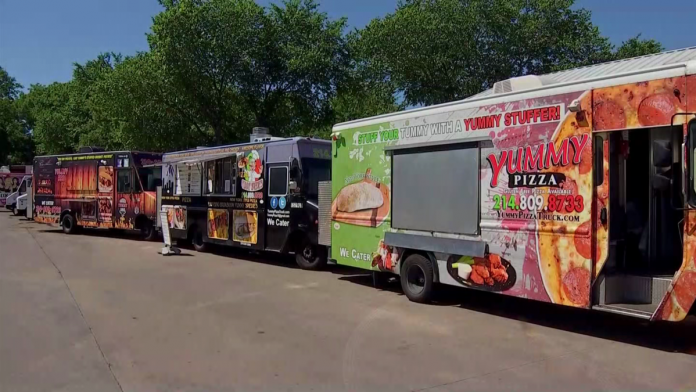 In downtown Dallas, food trucks will once again be allowed to serve customers at Klyde Warren Park. Starting Monday, food trucks will be back in the park for the first time in two months — with additional restrictions.

“We will have, instead of the typical 18 or so food trucks and carts, we’re going to have half that amount this first week. Then, the other half for the second week,” Klyde Warren Park President Kit Sawers said.

The staggered schedules will give trucks more space and make room for customers to socially distance as they line up. There will be stickers on the ground and security on hand to remind people to maintain a 6-foot distance, according to Sawers.

Sawers said food truck employees must wear face masks and gloves and provide cashless payment options. The park will also set out a limited number of tables and chairs.

Louie Khalaf, president of Yummy Food Truck Group, said his trucks will be sanitized at the beginning of every shift and at the end of the day. He said the window where customers order would be cleaned every 20 minutes and a shield is erected to minimize contact.

“We want to make sure that the customers that come in are absolutely safe and comfortable,” Khalaf said.

Khalaf said business initially took a hit during the pandemic, but homeowners associations and apartment complexes began to invite food trucks onto their property. Khalaf said he developed an online ordering system so customers could simply pick up their food at the truck, rather than wait outside. He also spent time feeding first responders.

Khalaf said he was looking forward to returning to Klyde Warren Park.

“We think of it as our store front,” Khalaf said. “It’s one of the major, major attractions in Dallas.”

The return of Food Truck Lane in the park marks a step toward inviting more visitors back, at a time when in-person programming is suspended.

“The trucks are also a great revenue generator for Klyde Warren Park,” Sawers said. “Klyde Warren Park is a nonprofit and like all nonprofits, we have been suffering financially over the past several months and will in the future.

“People are showing that they’re eager to get outside and the research has shown that parks and botanical gardens will be the among those first to be visited by people,” Sawers added. “I want to be sure our staff is in place to accommodate people when they begin coming back outside again and are able to enjoy the programs that we offer.”

The park has published its food truck schedule online.

Before you violate social distancing rules, beware your neighbor is watching