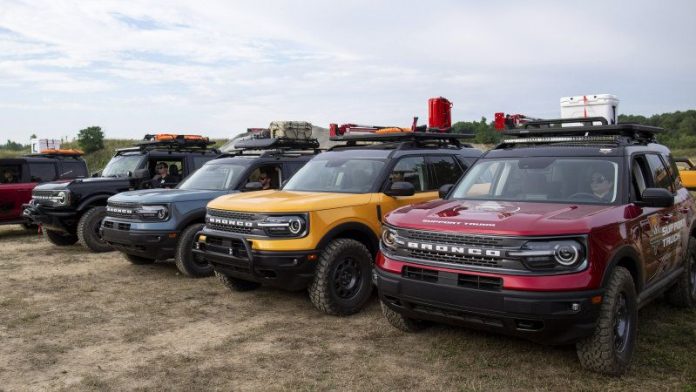 The Ford Bronco turned 55 this week, and to celebrate this anniversary of the original 4×4’s introduction, Ford made a series of announcements regarding its plans for the 2021 model, including the location of the very first “Off-Roadeo” owner experience.

Let’s start with the trucks, shall we? Ford has made quite a bit of buzz about its intentions to offer extensive customization options for the 2021 Bronco and Bronco Sport, both through an extensive Ford Performance accessory catalog and by way of partnerships with aftermarket parts makers. To highlight those plans, Ford brought out five ‘adventure concepts’ for Bronco Day, each highlighting a different series of available goodies.

First up is the Bronco Four-Door Outer Banks Fishing Guide, which is pretty easy to spot in this lineup. The front bumper, safari bar and off-road lights are all Ford Performance accessory parts, while the first-row soft-top insert comes from Bestop. Other custom touches include a Yakima platform roof rack, fishing rod holder (duh) and a slide-out tailgate, which will be available from Ford some time in 2021.

The next custom job is the Bronco Sport Tow RZR (yep, “tow razor”) which comes with a Yakima cargo rack and basket, a factory Class II trailer package and, well, a trailer with a brand-new Polaris RZR XP Turbo 1000. We’re guessing most Ford dealers won’t keep those in stock.

Next, we flip back to the big Bronco again with the Two-Door Trail Rig concept. This is essentially a Ford Performance concept, as virtually everything on the car was made in-house save for the roof rack, which came from Yakima. The winch, bumper, tube doors, light bar and lights, recovery boards and recovery kit are all Ford’s own doing. The limb risers were custom-made for the concept.

After that, we come to the Bronco Sport Trail Rig in which Yakima gets top billing thanks to a platform roof rack, a recovery rack and gear mount and a high-lift jack and axe holder. The one-inch lift is aftermarket, but Ford did not say by whom. The nudge bar and BFG tires are likewise not factory-spec parts.

The fifth is really more of a teaser than a concept. Dubbed the Bronco Sport Off-Roadeo Adventure Patrol, this is meant to be representative of the crew vehicles that will support Ford’s new Off-Roadeo owner experience events, the first of which the company has announced will take place in Austin, Texas. Where better to kick off a 4×4 ownership event series than in Hill Country?

“Getting into the wild is at the core of Bronco brand, and our first Bronco Off-Roadeo location in Austin, Texas, will help fuel Bronco fans’ quests for outdoor adventure,” said Mark Grueber, Bronco brand marketing manager. “At each of our four Bronco Off-Roadeo locations, we want owners and enthusiasts – even those who are off-road novices – to have as much fun as off-road pros and we want to provide them with knowledge and experience to make their future Bronco adventures even greater.”

Ford Also announced that the Bronco is headed back to Baja. The second iteration of the Bronco race truck will compete in the SCORE Baja 1000, slated to take place in November.