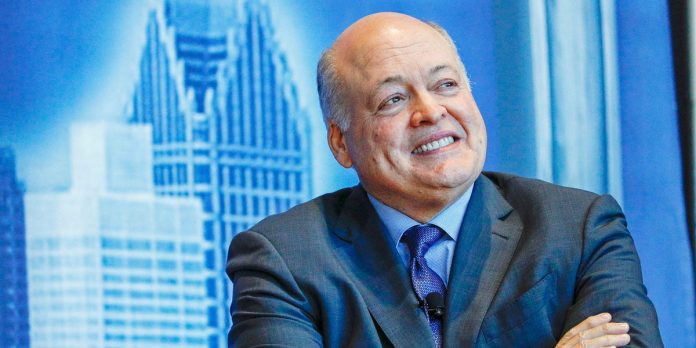 When nobody was looking, Ford CEO Jim Hackett quietly got on a roll.

Don’t worry if you didn’t notice. The drumbeat of negative news around Ford, centering on its stock price — down 33% of the past 12 months, and 42% since Hackett took over in 2017 — has been loud.

Adding to the din was a $11 billion restructuring effort, a credit-rating downgrade by both Moody’s and S&P in March, the retirement of longtime product czar Joe Hinrichs in February, an awkward launch of the new Explorer SUV last year, and, of course, the complete shutdown of the carmaker’s global operations during the early stages of the COVID-19 pandemic.

Hackett had already spent a few years in the wringer, but it was starting to look like the wringer was getting worse. The ascension of Jim Farley to chief operating officer got the industry chattering about succession plans.

But this is the car business. And despite the cancellation of the Detroit auto show in June and the sacrifice of Ford’s hometown showcase, despite much of the company laboring from home offices and simply trying to relax in Michigan backyards while the factories were idled, despite the 117-year-old automaker rapidly pivoting to manufacturing ventilators with GE Healthcare, despite a fairly grim financial outlook offered after first-quarter earnings hit, Hackett had product.

And when it comes to the car business, product conquers all.

And with Ford, the product speaks for itself. First up was the all-new F-150, the 14th generation of a pickup truck that’s been America’s bestselling vehicle since the first Reagan administration.

Remarkably, the new F-150 and the approximately 1 million in annual vehicle sales the broader F-Series should bring in for Ford was merely the stage-setting for the marquee event: the unveiling of the new Bronco SUV, a nameplate that lay dormant since 1996.

The all-online and all-broadcast Bronco reveal, undertaken last week in partnership with Disney, provided Ford with its first opportunity to break the internet. Customers rushed to secure $100 Bronco reservations and briefly crashed the website, an indication that Ford had hit a grand slam.

And Hackett knew it was coming. His guiding leadership philosophy has empowered him to be optimistic.

“I could say with extreme confidence that this was going to work,” he said in an interview with Business Insider as the Bronco reservations were still rolling in, two days after the SUV’s unveiling.

“To a fault,” he added, suggesting that supporters and critics alike would think he was arrogant. “I feel a quiet sense of satisfaction that people hung in there with me,” he said.

It wasn’t easy. When Ford reported a solid annual profit for 2017, Hackett — then less than a year on the job after taking over from Mark Fields the previous spring — had to contend with aggressive questions from Wall Street.

“This is the time,” Morgan Stanley analyst Adam Jonas insisted on a conference call in January of 2018, before stressing that Hackett needed to provide more detail on what the CEO had termed a “redesign” of Ford’s competitive fitness.

Hackett wasn’t flustered. Because he’d been there already. When he served as CEO of office-space designer Steelcase, starting in 1994 when he was just 39, he encountered similar skepticism. But he didn’t just win over critics; by investing in California-based design firm IDEO in 1996, Hackett reinvented Steelcase to focus on innovative, “human-centric” design and a process known as “design thinking.”

The undertaking brought Hackett into the orbit of Silicon Valley legends, including Steve Jobs, and made the modest Midwesterner an unlikely renegade in the business world: a successful CEO who wasn’t afraid of out-there concepts.

In a simplified sense, design thinking is about considering opportunities to innovate with product or services in terms of the entire context in which the innovation could occur. For Ford designers, this meant getting away from slick, traditional rendering of the next vehicle and instead creating storyboards to develop narratives around how the SUV could actually be used. IDEO’s application was noted for its embrace of empathy as a key aspect of the process — a consideration of the psychology of users.

The design thinker takes over in Detroit

Hackett added an unusual personality type to the trio of “Big Three” Detroit automaker CEOs when Ford Chairman Bill Ford, the great-grandson of Henry, and the board tapped him for the role. General Motors’ Mary Barra had achieved a reputation of steering the largest US car company into tough decisions it had avoided for decades, such as the sales of the historically profitless Opel/Vauxhall to France’s PSA Group. At Fiat Chrysler Automobiles, the outspoken Sergio Marchionne (who died unexpectedly in 2018) presided over a masterpiece of post-financial-crisis financial engineering; a successful 2015 spinoff of Ferrari, creating a $30 billion market cap company, made the executive a bankers’ banker.

Hackett, in his early sixties when he moved into the big chair at Ford headquarters in Dearborn, Michigan, immediately struck observers as more avuncular than Fields, a hard-charging, veteran executive who had laid the groundwork for Ford’s ability to avoid bailouts and bankruptcy in 2009, when both GM and Chrysler entered Chapter 11.

A one-time interim athletic director at the University of Michigan, his alma mater (Hackett played football as an undergrad), he had been overseeing Ford’s mobility initiatives after a stint on the board of directors. Hackett was the opposite of hard-charging, and through his collaborations with IDEO founder David Kelley, he’d learned to carefully and deliberately consider opportunities and the challenges that came with them.

In the extroverted realm of the auto industry, his approach seemed odd. But it had been honed through hours of conversation with Bill Ford, who had made no secret of his desire to make sure Ford both stayed in business for another 100 years and reinvented itself as something more than a purveyor of pickup trucks and Mustangs.

‘”My closest ally in this was Bill Ford,” Hackett said. “I’ve gotten to test ideas with him constantly. He and I would talk three or four times a day.”

Bill Ford’s commitment to Hacket has been tested, but it hasn’t wavered.

“The other day, he said, ‘It’s a better company since you’ve been here,'” Hackett recalled. “You could have knocked me over with a feather.”

The impression inside Ford was very different from what had developed outside the company. And that was why Hackett had pushed back against Wall Street.

“I’ve got to get everybody in the company on board,” Hackett explained, looking back on his reluctance to give analysts quick answers. “That’s how you lead.”

Starting with a new Mustang

The first glimmers of Hackett’s vision intensified last year, when Ford revealed the new Mustang Mach-E, the company’s first major foray into fully-electric vehicles and competition with Tesla, the market leader. Mach-E also expanded the Mustang brand, which has consisted of essentially one vehicle type since 1965. (It did likewise with Bronco, creating a separate brand.)

A four-door crossover SUV powered by batteries and wearing the Mustang badge was step one. Then came the F-150, revealed during a livestreamed event due to the pandemic, but crammed with “human-centric” thinking, notably its multifunction tailgate, stowable interior work surface, and portable generator.

It was all but a lead-up to the Bronco, however.

“This shift to embrace and to institutionalize design thinking has been clearly one of the gifts that Jim Hackett has brought to Ford,” Hau Thai-Tang, Ford’s chief product development and purchasing officer and a Ford employee since 1988, told Business Insider. “Products just hitting the market now are the first benefiting from his approach.”

It would be fair to suggest that the Bronco is the Ford vehicle that truly wears Hackett’s stamp. Throughout its introduction to the media, prior to its debut, designers and engineers frequently evoked design thinking and human-centric design.

That made sense because Hackett himself and the Bronco design team had conducted workshops devoted to bringing the highly anticipated new SUV to life.

Hackett’s first meeting with the Bronco group involved a classic Hackett moment. As he recalled, the team had brought a vintage Bronco into the design studio and had outfitted the vehicle with an abundance of gear.

Hackett’s instinct, then, was to treat the Bronco and its gear in the same way an archaeologist or anthropologist would a piece of antiquity. There was a specific reason why all these objects were being used.

That process informed numerous aspects of how the new Bronco, intended to be a serious off-roading chariot, was reimagined.

Hackett shared what has now become a classic example, one echoed by several members of the Bronco team. For the two- and four-door versions of the SUV, it was essential that the doors be removeable; Ford’s market research with potential customers had proven this, and the Bronco’s main competitor, the Jeep Wrangler, famously has doors that can be taken off.

But the Jeep’s doors can’t be effectively stored in the vehicle. So owners commonly chain them to a tree at the trail head and have to return later to retrieve them. Design thinking identified this a pain point and led Ford to develop a frameless door, lightweight enough to be stored in special carrying packs that could be stashed in the Bronco.

Making a plan and sticking to it

Two years ago, few would have expected such a useful marriage of design, engineering, and prospective customer satisfaction to be traced back to Hackett. And with the halting launch of another critically important Ford vehicle in 2019, the new Explorer SUV, industry observers were pondering Hackett’s competence.

“That idiot Hackett doesn’t know how to launch a vehicle!” the CEO said, referring to the skepticism, but then explaining that Ford immediately “unpacked that process” to figure out what went wrong.

Hackett said that he knew he was going to face criticism for a while, and that he might even be viewed as tone deaf. He wasn’t offering car talk. His message didn’t rely on cubic inches of engine displacement.

“In living this — I knew the gestation period for the thinking was going to a minimum of three years,” he added.

“And that gestation is hard to speed up. But I knew what my plan was. It’s what you’re witnessing. It was to remake our vehicles, to remake our design language, and to reinterpret Ford.”

Truck stolen out of Taylorsville driveway, suspect backs into owner in...

‘Project Sweetness’ thanks hospital workers on the front lines