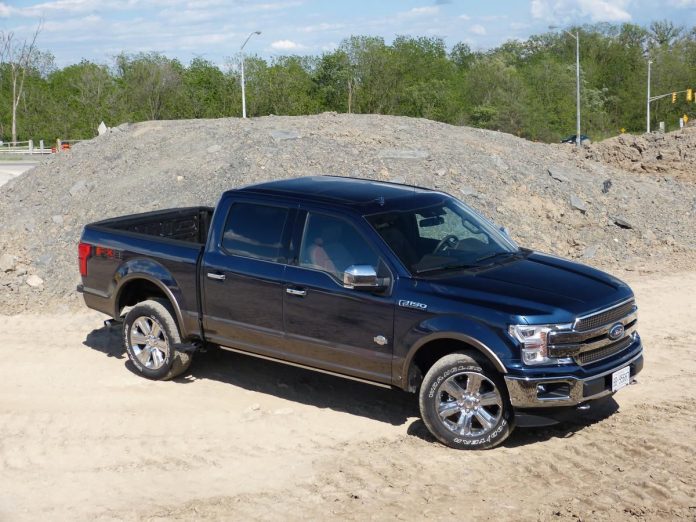 A couple of years ago, I was having dinner with Bill Ford, executive chairman of his family business (name dropper…).

He said Ford could build a year’s run of F-Series pickup trucks — over a million units — and not build exactly the same truck twice.

They don’t, but it just shows the variation in this product line.

My “King Ranch” tester is the pinnacle of the range, named after a huge ranch in Texas, where, not coincidentally, some 40 per cent of this model is sold.

Given that the base F-150 starts at $30,339 (and discounting is rampant among pickups), this is equivalent to the most expensive house in an inexpensive neighbourhood.

King Ranch comes only in the SuperCrew configuration, with a full rear seat, four big doors, the six-and-a-half-foot box and four-wheel drive.

Concerns were raised when this 13th-generation F-Series launched for the 2015 model year because of its aluminum body. Would it stand up? Could any body shop repair it?

But it’s still the bestselling vehicle in the game. Body shops have to adapt.

My tester had the FX4 off-road package, with electronic locking rear differential, hill descent control, skid plates, off-road front dampers and badging to let your neighbours know you paid more for your truck than they did for theirs.

It was painted a lovely sparkly blue, with King Ranch decals and logos all over the place, inside and out.

You might not think that tan leather upholstery would go with a blue exterior, but it seems to work.

The interior is well-executed, and the matte finish on top of the dash reduces reflections.

An eight-inch screen in front of the driver offers bright, clear tachometer and speedo, with smaller gauges for such as fuel level, coolant temperature and oil pressure in between.

Ford’s SYNC3 control system for SatNav et al. has a vastly faster-reacting touchscreen than earlier iterations, and voice recognition which will take some time to get used to, as these always do.

Apple CarPlay, Android Auto, a Wi-Fi hot spot, USB outlets front and rear, and 110-volt outlets in the dash and in the pickup bed rank among the high-tech features.

Nice round knobs look after the lovely Bang & Olufsen sound system and the dual zone auto AirCon with its four massive dash vents.

The three-seat rear bench features a fold-down centre console when just two are aboard.

Now, when a truck offers power deployable running boards, that’s a sign the truck is too big. But they did make it easier to clamber in and out.

You must stand back when these deploy to ensure they don’t “ankle” you (adapting the term “kneecap” for a lower portion of your leg).

My tester also had side steps behind the rear doors. Kick a lever and these pop out to ease climbing up to see what’s in the box. Unlike the running boards, these do not automatically retract, so make sure you do so before pulling away or you risk “ankling” pedestrians.

The tailgate has a fold-out step ladder to ease access into the bed, which features hooks and tie-down points everywhere. A wide range of accessories is available to aid hauling bikes, canoes, all sorts of kit.

My tester had the 3.5 litre twin-turbo V6, producing 375 horsepower and 470 lb.-ft. of torque. To it was bolted Ford’s 10-speed automatic, which can be set to Normal, Tow/Haul, Snow/Wet, Eco and Sport modes, to optimize performance for each of those aptly-named settings.

The combination gives good performance, and with 10 ratios, you might never see 3,000 r.p.m. if you don’t push it too hard. This should result in decent real-world fuel consumption.

I left the truck in “4×2” mode because I didn’t do any off-roading, and enjoyed nice weather during my test.

In Canada, you will not be so lucky, so a knob on the dash lets you select “4×4 automatic,” which engages the front wheels as it deems necessary; “4×4 high,” which keeps you in “four-by” mode; and “4×4 low” for the really tough going.

My main complaint with the powertrain is the shifter. You must depress a button in the shift knob to release it from Park, but it’s much too easy to pull the lever all the way back to the “M” (for “manual”) position. Then you’ll stay in first gear until you manually select second. Or until you shove the lever one notch back into Drive, where it should have been in the first place. A stronger detent is needed.

Ride quality with the off-road suspension is a bit firm. Unless you’re planning some serious boonie bashing, I’d leave this box on the order form unchecked.

The steering is light, direct and communicative, and the truck is easy to manoeuvre.

But wow, is it big. The large turning circle makes it a handful in the Canadian Tire lot or a parking garage.

A lot of people have difficulty backing up with a trailer attached because you have to steer right to turn the trailer left. With Ford’s system, turn a knob on the dash left if you want to steer the trailer to the left.

Experienced trailer towers will be confused; newbies will love it.

The F-Series passes my side-view mirror adjustment test — you can crank them out far enough to eliminate the no-longer-blind-spots.

But this truck’s blind-spot warning system is actually somewhat relevant because it extends coverage to beside a trailer which might otherwise be hiding an approaching vehicle.

Get more from the St. Catharines Standard in your inbox

Never miss the latest news from the St. Catharines Standard. Sign up for our email newsletters to get the day’s top stories, your favourite columnists, and much more in your inbox.

Sadly, like all Fords, it fails the ignition-off/lights-automatically-off test. Come on, people.

My tester included the “Technology” package, which brings the handy overhead 360-degree camera system, a pop-out washer to keep the front grille camera lens clean, and “active park assist” to guide you into a parking spot.

Normally I hate these things — didn’t you have to learn to park to get your licence?

But with a truck this big, you may need all the help you can get.

Oh, did I mention this truck is big?

The pickup truck market is the most brand-loyal in the industry. If you’re a Ford person, you won’t likely consider a Chevy or GMC, and vice versa.

My daughter Dr. Laura (the veterinarian) has always wanted a Ram 4×4. Diesel engine, of course.

Even she was impressed with the F-150 King Ranch.

I can hardly imagine higher praise.

Jim Kenzie is a Toronto-based writer and a freelance contributor for the Star.

In an online presentation earlier this week, Ford introduced what it is calling the “all-new” 2021 F-Series pickup truck, which will go on sale somewhere around the end of this year.

Well, the 3.5-litre V-6 hybrid engine is new. The 10-speed automatic is now standard across the board. The infotainment system is now SYNC4 and is an in-house Ford product, replacing the BlackBerry QNX platform used previously.

The console-mounted shift lever can be folded down to allow deployment of a huge working surface for laptops and other gear.

Presumably not when you are driving.

Seats that fold flat into makeshift beds so you never have to go home.

More self-driving technologies — just what we need in a huge truck on our crowded highways.

A bunch of upgrades to the pickup box and to in-cab storage systems.

Oh yes, the available deployable running boards now go all the way to the back of the truck, eliminating the need for the side step-up assist thing I mention in the review of the 2020 F-Series elsewhere today.

Ford researches the daylights out of its truck customers. No doubt these will be useful modifications to this vehicle.

More than a bit of a stretch.

A tasty sci-fi riff on a classic 2000s music video

Vermont joins 15 states in agreement to electrify trucks and buses