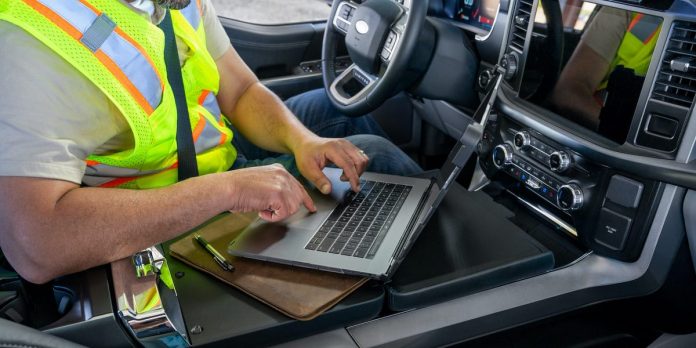 The newly unveiled Ford F-150 pickup truck is more suited for work and whatever else life throws at it than ever before.

The truck is rich with features such as dividable and lockable under-seat storage extenders, mobile generator capabilities, tailgate clamps, and a handy trailer backup-assist system.

But the best and coolest feature, however, is brilliant in its simplicity: the new F-150 can turn its center console into a desk.

Think about it. How many times have you been sitting in your car and needed a nice flat surface to eat off of or a tabletop to go over some paperwork with?

Many cars force you to make do with your own lap, but then the steering wheel gets in the way. Or you have to balance everything on the center console, which is designed for elbows, not platters of food. A slight imbalance could result in a greasy mess all over your vehicle. Nobody wants that.

This is a problem no more. Not with the 2021 Ford F-150, at least. The pickup truck offers something called the Interior Work Surface option. Available both in the bench and captain’s chair seating configurations on the XL to Limited trims, the Interior Work Surface station allows for the console shifter to fold into the center console after a push of a button when in park.

Once that’s tucked away, the console unfolds from the center armrest into a desk surface that Ford says is “ideal for signing documents, working on a 15-inch laptop or enjoying a meal when parked.”

The reason the shifter is able to simply fold away is that it’s electronic and therefore not connected directly to the truck’s 10-speed transmission, Ford confirmed to Jalopnik. Instead, “moving the selector into gear tells a computer what to do with the transmission.”

This means that the new F-150 could have just as easily offered the desk as a standard feature and let people change the gears through pushing buttons instead of using a physical shifter. But Ford said that it knew “many customers prefer a console shifter,” so that’s what it will give them.

Still, think of the whole world of new opportunities suddenly open to you — think of all the activities!

Think of how convenient that table will be for snacks the next time you go to a drive-in movie. Or how easily you’ll be able to play a game of chess or “Battleship” with your front seatmate. Or assemble a balsa wood glider. The possibilities really are endless. Just make sure you’re in park before you try any of these things.

It’s difficult to remember the last time an automaker offered a desk in a car from the factory. Jalopnik reminds us of the shifter-mounted “Mobile Office Pack” — which was, hilariously enough, also found on Fords in Australia from the late 1990s.

Fords and desks, man. Those guys are onto something.

Layoff approaches, relationships key to the return of furloughed drivers –...