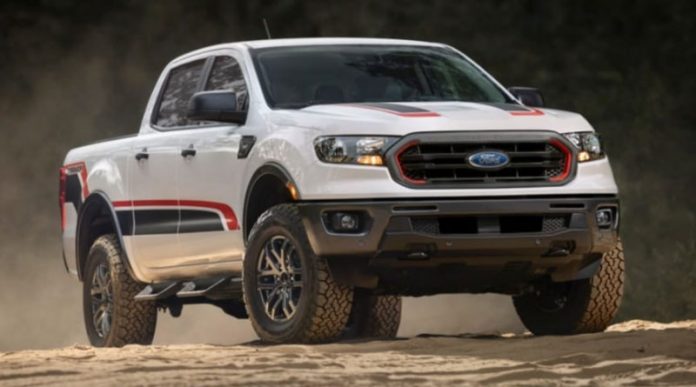 The Tremor Off-Road Package is designed to help owners tackle rough off-road terrain without compromising Ranger’s payload and tow ratings, according to the automaker.

The Tremor package, according to Ford, boosts Ranger’s off-road metrics, including a 30.9-degree approach angle, up 2.2 degrees from the base SuperCrew 4×4, a 25.5-degree departure angle, which is up 0.1 degrees and a 24.2-degree breakover angle, up 2.7 degrees.

It also comes with two new recovery hooks in the rear, in addition to the two in front.

Customers now also can control accessories like winches, lights, and air compressors thanks to Tremor’s six-switch auxiliary power bank mounted to the dash with rated loads of 25 amps, 15 amps, and 10 amps, plus three switches at 5 amps.

“Ranger Tremor can be your daily driver during the week then transform into your off-road adventure vehicle come Saturday morning,” says Todd Eckert, marketing manager for the Ford truck group. “With its added off-road capability, combined with the six-switch auxiliary bank and more than 200 Ranger-specific dealer-installed available accessories, Ranger Tremor is a very capable overlanding rig.”

The Tremor also adds new styling features inside and out. The grille features a Magnetic-painted surround with black bars running across the middle and red nostril accents in the corners. Special badging comes on both sides of the cargo box, and an optional hood and body graphics package adds extra personalization. The interior features seats with Miko suede inserts and “Tremor” stitched into the seatbacks, as well as black accents.

Ranger Tremor comes with the 2.3-liter EcoBoost engine with 270 horsepower and gas torque of 310 lb.-ft., paired to a 10-speed automatic transmission and standard 4×4 with electronic locking rear differential.

Planning One Last Summer Hurrah? These 7 SUVs And 1 Truck...