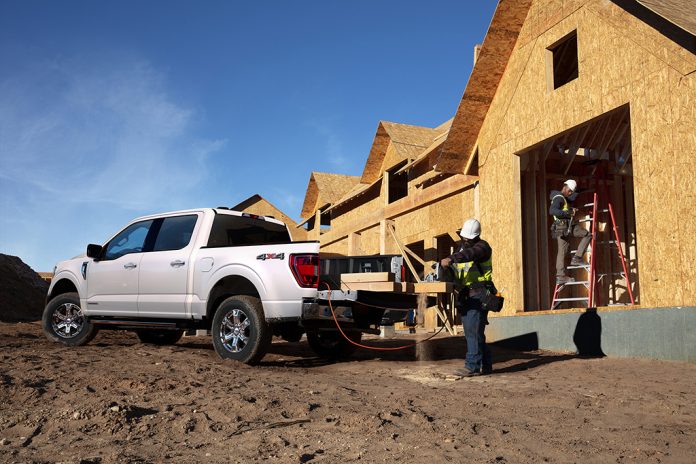 In the move toward clean-energy vehicles, it is the pick-up truck that has been the gap vehicle as passenger vehicles, utility vehicles and buses have embraced some form of clean electric energy.  But, by this fall, Ford will roll out a hybrid version of its popular 2021 F150 pick-up.

“It will be in dealerships by the end of the year,” said Ford’s communications manager Christine Hollander, adding it is ideally suited for the construction industry as its on-board battery will be able to power tools.

The introduction of a hybrid carves out a niche in what is a large pick-up market in both the U.S. and Canada with Ford’s F150 rated in Canada as a leading seller for 54 years.

“The pick-up has been the sacred cow of the industry,” said John Stonier, president of the Vancouver Electric Vehicle Association, explaining it is a key profit centre of the major auto dealers. Executives, with annual performance bonuses, are reluctant to tinker with sales, he said. As a result, new players have entered the market, establishing supply chains (battery plants and manufacturing plants) which have prompted the major auto builders to act in a market moving away from gas powered vehicles.

Also pushing the pick-up has been government minimum sales requirements placed on dealers to sell zero emission vehicles. “In B.C., it is 10 per cent by 2025,” said Stonier, but there are approximately 15 U.S. states that have also set minimums. “If you do not meet the minimum, you get penalized,” he said.

Blair Qualey, president of the New Car Dealers Association of B.C., said one of the challenges of the electric or hybrid pick-ups arriving on the market is pricing as they can easily top the $50,000 cut-off for a provincial subsidy. But, ultimately, he said, it will be up to the provincial and federal governments to determine how these new market additions will fit into subsidies that are offered.  “We know that pick-ups are an important sector,” he said as trucks are a staple product in Western Canada both in rural areas and for industrial and commercial uses.

Qualey said that he anticipates that by 2025 there will be a good supply of green technology pick-ups in the market by a variety of manufacturers. By 2040, gas vehicles will no longer be sold.

Stonier is not surprised that a hybrid is the first out on the market as it parallels what has occurred in the auto sector and also a hybrid provides a solution to many of the ills that have plagued the development of electric pick-ups. The two major ones are power performance as pick-ups haul loads and lack of driving range, both problems that manufacturers have been moving to fix with improved battery technology and hybrids.

Ford’s hybrid 2021 F150 is not a plug-in hybrid, said Hollander, but features a battery that is regenerated by the gas engine. In easy-driving mode, the pick-up will travel short distances on electricity but when the acceleration occurs, it switches to the gas engine. The estimated range of a tank of gas is 1,100 kilometres.

Next out of gate is expected to be GM’s all-electric Hummer, which is configured as a pick-up.  “We announced the fall 2020 date for the new GMC HUMMER EV reveal and that its production timing remains on track and on schedule – for late 2021,” said GM Motors communications manager Philippe–André Bissons.

The GMC Hummer EV truck has 1,000 horsepower, 11,500 lb-ft of torque and goes from 0 to 60 mph acceleration in three seconds. Pricing is expected to be announced in late September or October, he said.

Another electric or hybrid version of the pick-up is coming from Nikola Motors, a U.S. public company that has made a name by investing billions of dollars designing electric semi-trucks. It is pouring that research into its Badger pick-up, which it plans to unveil in December.

The Badger is advertised by Nikola as being available in either a battery-electric vehicle (BEV) or a hydrogen fuel cell electric vehicle (FCEV) or combination of both; can go from 60 mph in 2.9 second, can generate 906 horsepower, and 980 ft. lbs of torque.  The BEV has a range of 300 miles while a combination of FCEV and BEV has a 600 mile range.

Tesla is also taking pre-orders for its Cybertruck, which the company announced this summer will be built in Austin, Texas at a new plant under construction. The truck breaks from the usual pick-up configuration with a sleek elongated A shape and is promoted as a pick-up built like a sport vehicle. The all-electric vehicle is promoting a range of up to 500-mile range and can be charged at home, at destination charging locations, and Tesla’s network of more than 16,000 outlets.

Rivian R1T and R1S EVs to have quality interiors like Bentley,...