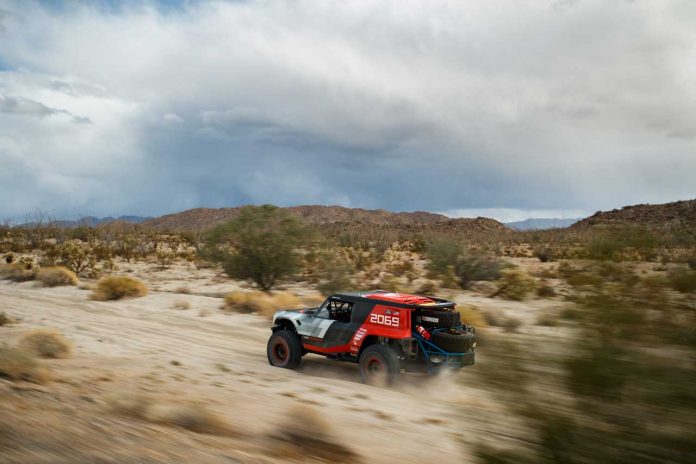 The all-new Ford Bronco is official, and we know exactly what it looks like and the options it will offer. Before we knew that the first glimpse we had a production vehicle was in the Bronco R prototype that was raced in Baja. Ford’s Chief Product Development & Purchasing Officer, Hau Thai-Tang, recently talked about the possibility of Ford producing the Bronco R as a turnkey racing vehicle.

Thai-Tang talked about that possibility with the crew over at Muscle Cars and Trucks. He said that if there’s interest, Ford would look into producing the Bronco R. Ford has done that with the Mustang and the GT supercar. Ford built the Mustang GT4 and the Ford GT GTLM racing cars.

The Bronco R is a Class 2 Division racing truck. While it looks very similar to the regular Bronco on the outside and shares many of the regular Bronco’s components, it’s a full race vehicle underneath. It has a complete roll cage, suspension with 14-inches of travel in the front and 18-inches in the back, and is ready to tear up very rough off-road terrain.

If Ford did decide to build the Bronco R, it’s unclear exactly how much it would cost. What we do know is that it will be much more expensive than the road-going version. A good example is the Mustang GT that carries a price of roughly $40,000 as a streetcar. The Mustang GT4 racing version sells for about $225,000.

It would be very cool to see fleets of Bronco R racers taking on the grueling Baja 1000 and similar off-road races worldwide. It’s exciting that Ford would look into the building the vehicles for race teams if there is a demand.