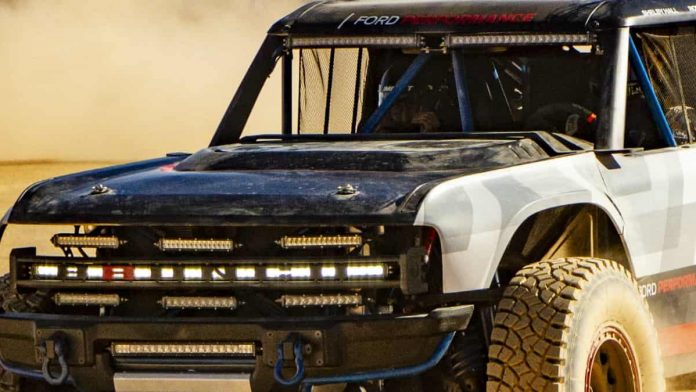 Ford is having a special 55th birthday celebration for its recently re-introduced Bronco lineup. The automaker, which recently brought the Bronco lineup back after a 24-year absence, has decided to honor the birthday vehicle with a slew of adventure concepts.

The concepts showcase factory-backed accessories that help to Bronco owners personalize their vehicles with affordable accessories.

At the same time, Ford announced that it was returning to the off-road wars with the return of its Bronco R to November’s Baja 1000. Last year, Ford first campaigned its Bronco R in the 1,000-mile race. However, mechanical issues sidelined the Bronco R about halfway into the event. I wrote a long piece about this several days ago and you can read it here.

“Our dream for Bronco was not just to design a family of vehicles people would love, but to build a community around people who love to go off-road and get into the wild, who want to customize and personalize their Broncos, and share experiences with each other,” Jim Hackett, Ford president and CEO, said.

When Ford announced the Bronco its Built Wild™ concept, the automaker noted it centered on five concepts that highlight the brand’s readiness for customization at the program launch. Beyond any standard options, Bronco featured more than 200 available factory-backed accessories for Bronco two- and four-door models, and more than 100 accessories for Bronco Sport models. The concept prototypes include:

The first of four Bronco Off-Roadeo locations will be in the hill country of Austin, Texas. Opening next summer, the Bronco Off-Roadeo is available to Bronco two- and four-door and Bronco Sport Badlands series owners to get the most adventure out of their rugged SUVs and to build connections to the greater Bronco community.

The off-roading and outdoor adventure playgrounds are designed for all skill levels, with experiences that aim to build confidence and inspire Bronco owners to get out in the wild for years to come.

“Getting into the wild is at the core of the Bronco brand, and our first Bronco Off-Roadeo location in Austin, Texas, will help fuel Bronco fans’ quests for outdoor adventure,” said Mark Grueber, Bronco brand marketing manager.

“At each of our four Bronco Off-Roadeo locations, we want owners and enthusiasts – even those who are off-road novices – to have as much fun as off-road pros and we want to provide them with knowledge and experience to make their future Bronco adventures even greater.”

Go to broncooffroadeo.com to learn more or to sign up.

Bronco Returns To the Baja 1000

The racing prototype build by Ford Performance and Geiser Performance continues to serve as a testbed for the brand’s innovative design, capability, and extreme durability testing.

It features an extreme race version of the high-performance off-road stability suspension with independent front, position-sensitive shocks, end-stop control plus ultra-high-speed desert race tuning. Participation in the brutal off-road competition is part of the Built Wild Extreme Durability testing – a series of demanding tests to ensure all Broncos deliver the highest levels of performance, durability, and capability to every owner.

Ford is the Official Truck and SUV of SCORE-International Off-Road Racing and lead sponsor of the SCORE World Desert Challenge Series, which includes the 2019-22 SCORE Baja 1000 races.

Ford is also the official vehicle of the King of the Hammers ULTRA4 series. Together, they underscore Ford’s commitment to off-road motorsports and serve as a platform to develop the Bronco brand and connect with off-road enthusiasts. Follow the Bronco R race prototype at Baja and the entire Bronco family on Instagram, @fordbronco.

Ford’s Bronco Has An Unprecedented Kickoff

Customer response to the reveal of the all-new Bronco rugged SUVs has been unprecedented. So far, more than 165,000 people placing $100 deposits for orders online in the first three weeks and more than 13 million tuning in on television or watching on social media platforms to catch a glimpse of the highly anticipated new models.

Within hours of the July 13 reveal, #FordBronco dominated social media platforms, trending to the top conversation on Twitter in the U.S.

As the top Google search request, it helped drive more than 5.4 million visitors in the first 48 hours to the Ford.com website to learn more and place reservations. There have been more than 19.5 million total visitors to date.

Marc Stern has been an auto writer since 1971. It was a position that filled two boyhood dreams: One was that I would write, and two that I write about cars. When I took over as my newspaper’s auto editor, I began a 32-year career as an automotive columnist. There isn’t much on four wheels that I haven’t driven or reviewed. My work has appeared in Popular Mechanics, Mechanix Illustrated, AutoWeek, SuperStock, Trailer Life, Old Cars Weekly, Special Interest Autos, and others. Today, I am the Ford F150 reporter for Torque News. I write how-to and help columns for online sites such as Fixya.com and others. You can follow me on Twitter or Most of Marc’s stories can be found at Torque News Ford coverage. Check back again and search for Torque News Ford F-150 news for more F-150 truck news coverage.