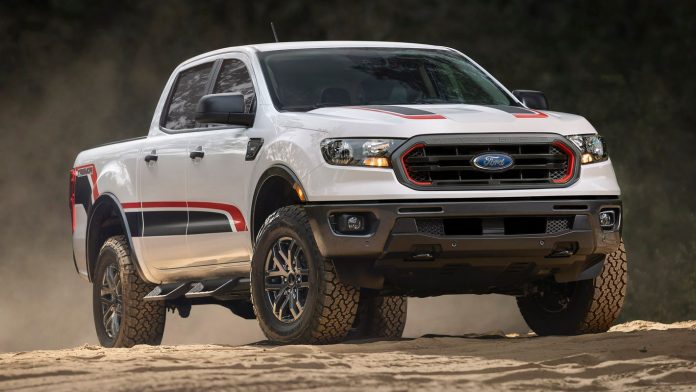 The all-new 2021 Ranger Tremor off-road package enhances the look and feel of the midsize pickup as Ford steps up its fight against the Toyota Tacoma.

America will see an all-new 2021 Ranger Tremor off-road package that enhances the look and feel of the midsize pickup as Ford steps up its fight against the Toyota Tacoma. This is the latest effort to win over drivers who enjoy using their truck both off-roading and commuting to work.

“Our target customer wants to have adventures, be free and get away from the daily grind but also needs to carry gear, supplies and passengers,” said Chad Callander, marketing manager for the past five years for Ford Ranger.

Sales tend to be higher on the coasts, in larger metropolitan areas, with 15%-20% in California. Los Angeles is a huge market. But Seattle, San Diego, Dallas, Houston, Boston and New York also are hot spots for sales of the truck, which is smaller than the best-selling F-150.

“Anywhere it’s easier to maneuver the vehicle into a parking space,” Callander said.

After unveiling the vehicle at the Detroit auto show in 2018, and hitting dealerships in 2019, Ranger is one of the few vehicles to gain sales in 2020.

In the second three months of 2019, buyers purchased:

In the second three months of this year, consumers bought:

More: First Drive: 2019 Ford Ranger stakes its claim to be No. 1 midsize pickup

“We’re getting momentum in the marketplace,” Callander said. “But our most off-road capable Ranger wasn’t really at the level we needed it to be to be competitive in the segment. We knew we needed to do more in that space, so we went to work on the Tremor package. It has a better suspension, more aggressive knobby tires for the off-road trails — but you don’t want to lose any of the on-road comfort. This isn’t just a weekend warrior vehicle. It’s my daily driver.”

Mark Douglas, president of Avis Ford in Southfield, said shoppers get the Ranger when they want truck capability in a compact, fuel-efficient “easier-to-drive-in-the-city package” with useful payload and towing.

Mark Douglas, president of Avis Ford in Southfield, sees Ranger appeal increasingly growing. He is seen here in the showroom in July. When not having his photo taken, Douglas wears a face mask in the office. (Photo: Kenneth Michelini)

“It’s just a different alternative,” he said. “At the end of the day, an F-150 is a big truck. This would be the equivalent of an Explorer versus (the bigger) Expedition. Certain customers just aren’t comfortable with full-size vehicles. The Ranger will fit into your garage, no problem. I’ve always driven an Expedition and there’s been times when I’ve had customers — they’ve had to see if it actually fit in their garage. The F-Series and Expedition are about the same height and width; they’re built from the same frame, so they’re very similar.”

This latest Tremor package, Douglas explained, reflects deep research over the past two years by Ford and a recognition that consumers were “upfitting” their vehicles after purchase.

By offering all the bells and whistles from the factory, customers get what they want without needing to add on themselves. And those dollars stay with Ford.

“This is a whole sort of niche-type buyer,” Douglas said. “A lot of (car companies) sacrifice that market to the after-market companies. So Ford is trying to get into the game of outfitting these vehicles with amenities they see customers really want. We’re stepping up to the plate to ultimately be able to provide it from the manufacturer. This is not that different from the F-150 concept, which has been hugely successful for the company with the Raptor.”

The Tremor also includes a frame-mounted steel front bash plate and underbody skid plates, different drive modes and traction control that is “recalibrated for improved acceleration and traction in gravel, so customers can punch it in a washout with gusto,” the company said in a news release.

“This off-road Ranger is going to command F-150 prices,” said Ivan Drury, senior manager of insights at Edmunds, the online automotive research site. “But with Ranger buyers focused more on recreation and being located on the coasts versus towing and living in the center of the country, the two groups are so divergent from one another there is little to no risk of cannibalization. Midsize buyers want a smaller, easier truck to live with and are willing to pay near full-size price for it.”

Improving the Ranger creates a killer opportunity for Ford, said Eric Noble, president of The CarLab, a car design consultancy based in Orange, California.

“At one point, together with only Toyota, Ford owned the compact truck market,” he said. “Ford left that market. Then General Motors entered with the (Chevy) Colorado, which still is the best of the compact trucks.  Far and away, it’s the benchmark of the segment. Tacoma you couldn’t consider best in segment. Its updates have been limited. Tacoma is running off Toyota-brand inertia.”

Despite encouraging sales, the Ranger now feels “overly heavy, crude and unrefined on-road,” Noble said. “From a driving standpoint, it isn’t even close to the everyday usability that Colorado offers. Ranger’s base suspension, clearly carried over from markets outside North America, could only get better by any engineering time spent on it. That’s been its weakness. Putting attention on the Ranger, consumers will definitely benefit. It’s good for Ford.”

More: He was 1 of 8 relatives to work in auto plants. Then he began telling stories to millions.

The Tremor off-road package is available on 2021 XLT and Lariat SuperCrew 4x4s. The package costs $4,290. Ford builds the Ranger at its Michigan Assembly Plant in Wayne. Tremor production is expected to begin in early 2021.

More: From panic to triumph: Behind the scenes of Ford’s epic F-150 restart

A century ago Wooster FD had pet monkeys

Polk charity works to stave off hunger for migrant families –...