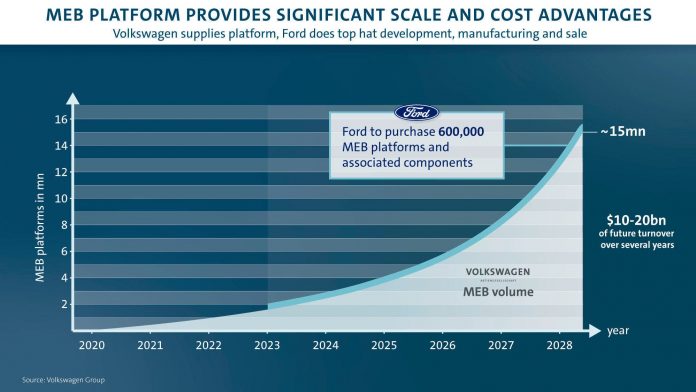 We have been talking a lot lately about how urgent the need is for electric vans, the kind that deliver products of every description to consumers (more so now during a time of pandemic than ever), and serve as rolling workshops for plumbers, painters, and carpenters. Ford and Volkswagen announced a year ago they were planning to work more closely together, mostly in the area of commercial vehicles.

Now the two companies say they have formalized their cooperative agreement, and it has the following major goals:

“In light of the Covid 19 pandemic and its impacts on the global economy, more than ever it is vital to set up resilient alliances between strong companies,” Volkswagen Group CEO Herbert Diess said in a press release. “This collaboration will efficiently drive down development costs, allowing broader global distribution of electric and commercial vehicles, and enhance the positions of both companies.”

Jim Hackett, CEO of Ford, adds, “This alliance comes at a time of tremendous enthusiasm about the intersection of increasingly intelligent, connected vehicles in an ever-smarter world. This creates a huge opportunity to innovate and solve many of the world’s transportation challenges and deliver extraordinary benefits to customers — even as companies need to be selective about how they use their cash.”

The collaboration could ultimately lead to 8 million new vans and pickup trucks on European roads in coming years. Sadly, none of them will be electric. The world needs more commercial vehicles powered by gasoline or diesel engines like it needs another couple hundred thermal generating plants. The companies seem to be oblivious to the fact that many cities are banning convention delivery vehicles from their streets and more are thinking about doing so.

If VW and Ford were focusing on making those new vehicles electric, that would be grounds for celebration. But they are not and that is a precious opportunity missed. They may find the demand for conventional vans and trucks is far lower than they anticipate as more companies offer electrified vehicles to commercial buyers and the EU keeps tightening vehicle emissions standards.

An EV On The MEB Chassis

What is likely of more interest to CleanTechnica readers is the part about a “highly differentiated” electric vehicle with a Ford badge on it for the European market. What in the world does that bit of corporate doublespeak even mean? We actually have no clue, other than a statement by Volkswagen that ultimately there could be 600,000 of the MEB-based vehicles manufactured.

Early this year, there was considerable speculation that the MEB-based product from Ford would be a smaller version of the Mustang Mach-E — sort of a Mini Mach, if you will. That rumor was quickly tamped down by Ford, but it does make a lot of sense. SUVs are the hottest segment of the used car market, and the Mach-E may be a midsize car in America but it is a large car by European standards.

The Volkswagen ID.4 based on the MEB platform will be roughly the same size as the Mach-E, so making a smaller electric SUV that would appeal to European buyers makes a lot of sense. But “highly differentiated” could be mean a rhombus on wheels that goes 200 miles an hour suspended on balloons. (Really obscure musical reference there.) We will just have to wait and see what Ford comes up with. Whatever it is, it’s supposed to go on sale in 2023.

Ford and Volkswagen have both made investments in autonomous driving startup Argo AI. Now they will work together to leverage those investments to the mutual advantage. The global reach of both companies will give Argo AI’s platform the largest geographic deployment potential of any autonomous driving technology to date. Reach and scale are important factors in developing a self-driving system that is robust and cost efficient.

Deployment could be months or years away, but working together could save both companies boatloads of cash and tons of time. Nevertheless, the Volkswagen press release is at pains to point out there will not be any cross-ownership involved in the collaboration and both companies will remain competitors against each other in the marketplace.

Steve Hanley Steve writes about the interface between technology and sustainability from his homes in Florida and Connecticut or anywhere else the Singularity may lead him. You can follow him on Twitter but not on any social media platforms run by evil overlords like Facebook.

Jackalope Cellars offers curbside wine pickup out of the back of...

Black Behind the Wheel – The New York Times