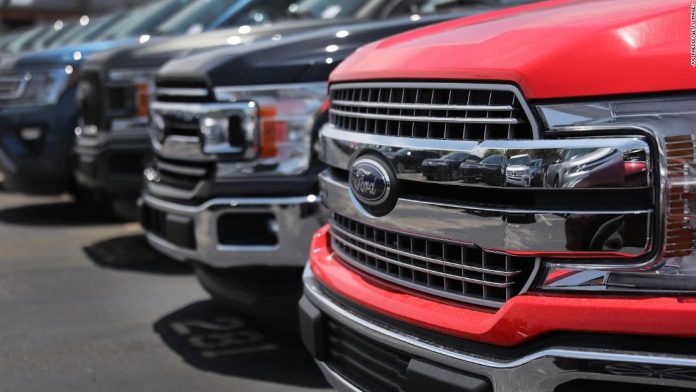 A full-hybrid pickup represents a major leap for Ford (F). While hybrid pickups have been offered before, they’ve typically been of the “mild hybrid” variety, utilizing small electric motors to provide minor gains in fuel efficiency. As the hands down market leader, Ford could have just carried on with its traditional engine lineup. But instead it has decided to invest in a hybrid system capable of meeting the demands of its demanding truck buyers.
It’s nearly impossible to overstate the importance of the F-150 for Ford. The F-series trucks, which include the F-150 and its larger Super Duty siblings, such as the F-250 and F-450, have been the best selling trucks in America for more than 40 years. Buyers picked up almost 900,000 F-series trucks in 2019, accounting for more than a third of Ford’s sales in the US, and they are responsible for a very large part of Ford’s profits in North America.

Ford has been willing to make major revisions to the F-150 before. In 2014, Ford unveiled a F-150 that featured a lightweight all-aluminum body that improved fuel economy while allowing more load-carrying capability. Cars, particularly luxury cars, have been made with lightweight aluminum bodies before. but it was a radical idea for a “Built Ford Tough” pickup.

Competitors’ ads, particularly from General Motors (GM), took shots at the very idea of an aluminum truck, but the F-150 kept its ranking as America’s bestselling vehicle and aluminum bodies have continued as an F-150 feature. Even GM’s flagship pickup, the Chevrolet Silverado, now contains a large portion of aluminum alloys in its bodywork.
This time, Ford will unveil the first full hybrid option for a large pickup from a major manufacturer. GM offered mild hybrid trucks years ago and Ram, the North American truck division of Fiat Chrysler Automobiles (FCAU), offers mild hybrid options on its pickups now.

But those are very different from what Ford will be offering. Mild hybrid vehicles have only small battery packs and weak electric motors designed just to help the vehicle to get moving. They get somewhat better fuel economy but the trucks can’t drive using electric power alone.

A full hybrid vehicle, like a Toyota Prius, Ford Escape Hybrid, or the truck Ford will unveil, stores power in relatively large battery packs and has stronger motors that can drive the vehicle, at least at low speeds and under light loads, without the gas engine having to run at all. Hybrids don’t need to be plugged in, although some can be as an option. Instead, they store energy when the gas engine is running and during braking.

People tend to associate hybrid technology with relatively small and light vehicles that are not designed for hard work. So it will be interesting to see how well people embrace Ford’s new hybrid option on the F-150. A lot will depend on how well it’s engineered, and how much it can do beyond saving on gas. said Ivan Drury, an industry analyst with Edmunds.com.

Saving money on gas is important to a significant portion of truck buyers, of course. These are large vehicles that come with large fuel bills so anything that can make a dent in that is a major benefit, especially for fleet customers. But buyers also want the towing and hauling capabilities that they’re buying a truck for in the first place.

Saving fuel and being able to work hard are not incompatible. A good example is Ford’s 2011 introduction of its EcoBoost turbocharged V6 engine as an option on the F-150, said Drury. Originally greeted with skepticism, the EcoBoost engine was embraced by F-150 buyers once the technology proved itself capable of performing in a hard working truck, he said.

“The EcoBoost is a case where they rolled it out and the [customer acceptance] has just gone up and up and up,” he said.

Today, the 3.5-liter EcoBoost is the most popular engine option in the F-150, according to Ford.

Price will also be a critical factor for Ford’s new hybrid truck. How well-accepted the hybrid option becomes will depend on whether it will be priced as a niche option for well-heeled shoppers and company fleets, said Allyson Harwood, an analyst with Kelly Blue Book.

“I think that they want this to be something that people see as a valid option for them when buying a truck,” said Harwood. “So it would be in everyone’s best interest to have that as available at a fairly reasonable upgrade price.”

Ford will continue offering their mainstay V8 and diesel engines in the F-150, Drury said, because there are customers who will just insist on what has always worked for them. But Ford’s penchant for innovation will help push the whole industry forward, he said.

“People get to sit back and watch the innovator,” he said, “and the receptivity toward what Ford does is a great litmus test for all the other brands to see how far they can go with this supposedly very traditional market.”

Ford also plans an all-electric version of the Ford F-150, although that truck is not expected to be unveiled on Thursday. The electric truck market will be much more crowded than the hybrid truck market.

I-81 southbound in Luzerne County closed due to crash | Times...