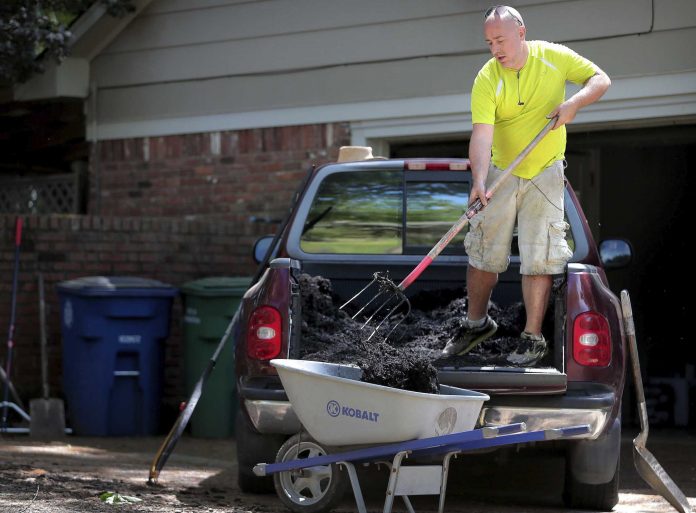 MEMPHIS, Tenn. (AP) — Friday morning, Scott Briggs parked at a gas station, picked up his phone and dialed the number for The Geoff Calkins Show on 92.9 FM in Memphis.

It was free-commercial Friday, and Briggs was ready to give his brand-new business an additional boost with an on-the-fly sales pitch.

“Hi, this is Scott, I’m a laid-off bartender in the city of Memphis and I can take care of all your lawn care needs,” Briggs said to begin his strict 30-second time slot.

The first-ever advertisement to roll off his tongue was far different than the one he would have expected to give just a couple of months earlier. That one probably would have featured craft cocktails and happy hour specials.

But there he was, sitting inside of his car, spewing his very best offering to extend his infant-stage lawn care business beyond the two weeks that it was already booked strong.

“I kind of got lucky that I heard Geoff (start the segment) while I was just about to pump my gas,” Briggs said. “At first I wasn’t sure if I would be working or not whenever he got it going. I was fortunate to get in, I guess the gods smiled upon me.”

Briggs hopes his leap to another career, even if temporary, happened right on cue as well.

“I guess (I know how to hustle),” Briggs said. “… I don’t ever recall a time where I haven’t been doing something.”

BarWare, where Briggs used to work as a bartender, closed one week before the rest of Memphis shut down due to coronavirus. The bar owner was aiming to be proactive, a decision that in hindsight was likely beneficial for Briggs.

All four of the bartenders who worked at BarWare were laid off and sailed into a future of uncertainty. Of his three other co-workers, Briggs said, one is still searching for a job, one is using a sound engineering degree to launch a music career, and one is in recovery after contracting COVID-19.

As for himself, he’s now putting his multi-time neighborhood yard-of-the-month reputation (no, seriously) on the line.

No proper landscaping career can exist without a bit of weed-pulling and mulch-spreading maintenance first.

“Like 16 million other Americans, I filed for unemployment,” Briggs said. “There were a few bumps in the road with it, because I had never done that before. I made a few errors on my first application, and needless to say, I haven’t had any success with any of the programs.”

That’s when the desperate brainstorming sessions in search of a new job began. No matter what, he agreed there would be one overlying qualifier in mind.

Whatever he chose to do, it needed to be safe. There was strong reasoning why.

“I’m uninsured,” Briggs said. “Not to try to create a sob story here, but we just want to be safe. The odds aren’t good for the uninsured. That’s why I don’t quite know if I would even go back to work (as a bartender) this summer, or if things get started back up in May. Maybe I’ll be back at it next year. Hopefully there’s a vaccine out by then.”

The answer he would eventually find was yard service, an outdoor hobby he already enjoyed and he was available through the fall.

“By mowing yards for the summer, I knew that was perfect for social distancing and keeping myself away from other people while still generating income,” Briggs said. “Plus, you know, it was something that I already knew how to do.”

With the help of his wife, a social media manager for several local small businesses and a “marketing expert,” they also figured they could get the service up and running within in a week’s time.

Together they could create a website, and even door hangers that could work for advertisement.

But first, and most importantly, it needed a name; a title so foolproof it would be impossible to miss. It needed a name that was not only accurate, but also told his story.

“There’s brainstorming and few margaritas to thank for the end result,” Briggs joked.

He was a bartender, after all.

So, Memphis’ newest one-man lawn care service was born in the midst of a global pandemic.

Briggs’ fleet is modest, to put it lightly.

It consists of a single weed trimmer, a Honda push mower, a pair of pickup trucks and a hard-working set of hands. It’s not much, but it’s enough to get by.

“Hey, it’s a really nice push mower,” Briggs joked. “I’ve looked at getting a new mower, but that’s a large expense right now for someone just starting out. We’ll save that expense for down the road.”

And that truck, well, it’s not exactly his.

“I’ve had a few fortunate breaks,” Briggs explained. “Both sets of my grandparents let me borrow a truck. After I got done at the bar, I would drive for Lyft or for Uber, so I have a (Toyota) Prius. That was my other way of making money. So now they’ve let me just borrow their trucks for an extended period of time.”

Because any self-made go-getter needs a little bit of luck.

And Saturday, that truck bed was filled with dark mulch. More times than one. He’s almost completely booked for the next two weeks, in fact.

Did anyone think he would find work so fast?

“I’ve been asking myself that question for the past two weeks,” Briggs said. “There’s been a lot of patting myself on the back and giving myself ‘attaboys.’”

Although he’s new to operating his own business, he’s no slouch when it comes to strategy.

The idea of going house to house and cutting lawn after lawn to pile up as many customers as he can is just not feasible for him the way it is for large lawn care businesses.

Instead, he found a niche by offering landscaping, or in other words, the time-consuming work that large businesses would rather not do.

“The jobs are a little bit few and far between,” Briggs said, “but I’ve been able pick up a lot of those landscaping jobs. … Lots of people want garden beds or want to redo their mulch. I’ve been planting new flowers, planting new bushes and taking out old stuff. For me, it’s kind of about the small, odd jobs.”

“The bills are paid right now,” Briggs added. “We actually had a plan, initially, on how to take care of our finances but now we are going to reassess. Because this has been a success. I’m doing really well right now, but I want to take it day-by-day.”

It’s a testament to his work ethic and dedication to find a way, going from a laid-off bartender unable to receive unemployment to a startup business owner on the verge of creating a new life for himself.

Woman Killed, 3 Others Injured When Truck Crashes Into Stranded Driver’s...