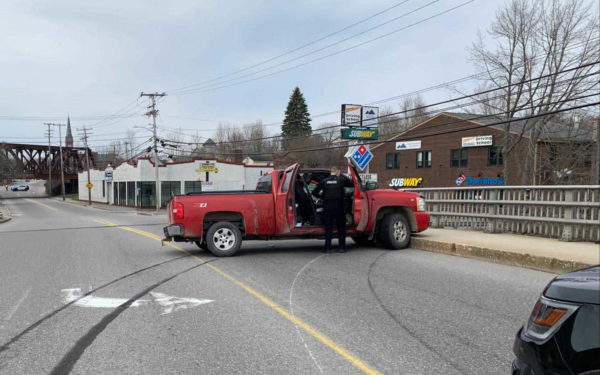 Police chased a red Chevy pickup truck operated by Christopher Nelson, 38, of Fort Fairfield through Saco until he was apprehended in Biddeford on Sunday, April 26.

SACO, Maine — A Fort Fairfield man led police on a chase through the city of Saco Sunday morning that ended with spike mats being deployed and an arrest on multiple charges.

Christopher Nelson, 38, was reported to have driven a red Chevy pickup truck through a construction site on Industrial Park Road at around 8:42 a.m. Sunday. The vehicle ran over traffic cones while operating in the wrong lane and nearly struck a vehicle, according to a press release from the Saco Police Department.

Nelson is reported to have left the scene before police arrived, but was located on nearby Buxton Road. Police reportedly tried to stop the vehicle but Nelson refused, ensuring a chase. The vehicle was northwest on Louden and Boom roads, where police discontinued the chase.

Police deployed spike mats on Boom Road, deflating the tires on the vehicle’s driver side, police said. Nelson continued driving until his vehicle spun out at the intersection of Elm and Pine streets, where he was apprehended by Saco and Biddeford police.

Nelson was taken to York County jail. He is expected to appear in court on July 24 for a felony charge of eluding the police and misdemeanor charges of criminal speeding and leaving the scene of an accident, Saco Deputy Chief Corey Huntress said.

Man, 40s, dies after crash between car and a truck near...

Tesla Model 3 ‘on Autopilot mode’ crashes into truck in Taiwan