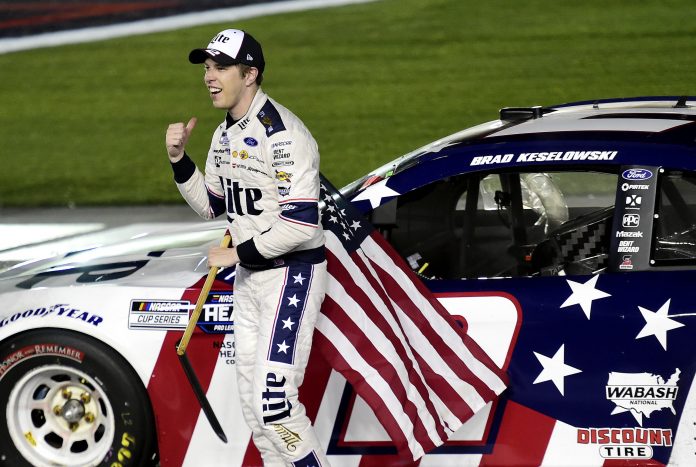 NASCAR’s “silly season” just got a whole lot zanier. The Eastern Speed Board covers it all in their latest edition.

The NASCAR offseason’s moves and shake-ups are often referred to as “silly season”. 2020 as a whole could well be described that way, but Joe Gibbs Racing put a particularly impactful twist on the upcoming proceedings.

JGR announced the Thursday that Erik Jones would exit the team’s No. 20 Toyota, which appears set to be filled by Christopher Bell. A former Xfinity Series standout in a Gibbs Toyota, Bell has been working with JGR satellite team Leavine Family Racing in his first full Cup Series campaign. He became available when LFR was sold earlier this week. The team’s No. 95 Toyota will run the remainder of the 2020 season before shutting down operations. This leaves Jones, a two-time Cup Series race winner and 2015 Truck Series champion, without a ride heading into 2021.

Additionally, Brad Keselowski had an incredible week on and off the track. Sunday saw the 2012 Cup Series champion win his third race of the season at New Hampshire Motorspeedway. Less than 24 hours later, it was revealed that former free-agent-to-be Keselowski would continue his endeavors in Team Penske’s No. 2 Ford for at least another year. This removes Keselowski from the No. 48 sweepstakes, as the legendary Jimmie Johnson is prepared to step away from the Hendrick Motorsports vehicle.

What’s the takeaway from everything? ESM’s NASCAR experts on the Eastern Speed Board investigate…

Keselowski finishing a Hall of Fame career in Rick Hendrick’s No. 48 always seemed too good to be true. Besides, as cool as it would’ve been to see him finally earn a ride at Hendrick Motorsports, it wouldn’t have felt right. Images of Keselowski in No. 48 gear would’ve been included on the same lists and galleries of Brett Favre in a New York Jets jersey or Teresa Weatherspoon in Los Angeles Sparks colors. It’s rare to see any driver end their career in the same car that began it. Keselowski has been, in another Seinfeld reference, Penske material for all of his full-time Cup career. It’s nice to see that one of NASCAR’s longest-running partnerships will continue. For Keselowski to earn his new deal after a dominant weekend joining Kevin Harvick and Denny Hamlin as the only three-time winners this season makes it even sweeter.

Dylan Price: I think this was something that made too much sense not to happen. Brad would’ve been a fit in the 48, but he’s been putting up impressive showings in the 2 for Penske. He could ultimately bolt next year if Austin Cindric is ready and he doesn’t want to stay with Penske any longer, but I believe this was a move that made sense for both parties and I’m glad it got done.

Nathan Solomon: I’m happy to see Brad Keselowski signing an extension with Penske. He just seems like the right man for the car and it makes sense to keep him as the driver. He’s obviously been very successful driving the No. 2 car, winning a championship, and a lot of races along the way. I had a lot of trouble seeing anyone but Brad in the car. Congrats to him on the extension, and I bet he will remain at Penske for the rest of his career.

Geoff Magliocchetti: Drastically, and this might only be the beginning.

First off, Leavine Family Racing will be missed. In an era more or less dominated by “superteams”, the group had formed a solid single-car foundation with their No. 95 Toyota. Their evolution from start-and-park squad to respectable racer (particularly with Bell and Matt DiBenedetto behind the wheel over the last two seasons) was nothing short of impressive.

Bell’s departure and the subsequent demise of his No. 95 team alters the landscape for both veterans and newcomers alike. For one thing, if JGR wanted to bring up Harrison Burton, their satellite squad in LFR is no longer there. Ditto, perhaps, if Stewart-Haas Racing wants Chase Briscoe to drive the No. 14. Now pending free agent Clint Bowyer has one less ride to turn to if he wishes to continue his career. Sure, Bell benefits from the get-go, but it could end Jones’ career of contention before it truly begins. Look no further than the case of Daniel Suarez, who went from Xfinity Series champion at Joe Gibbs to racing for the underfunded No. 96 at Gaunt Brothers Racing in just five years.

But that might not be a problem now that Gibbs’ maneuvering has set a new plan into motion. We already have vacant spots at JGR (No. 20 Toyota), Hendrick Motorsports (No. 48 Chevrolet), and Chip Ganassi Racing (No. 42 Chevrolet, currently piloted by fill-in driver Matt Kenseth). Time will tell just how many ripples the bombshell of the Jones/Bell switch made on the Cup Series surface.

Dylan Price: First, I am very disappointed to hear that LFR is shutting down because I felt they had the potential to be the next Furniture Row-esque “come out of nowhere and win it” team.

Christopher Bell being out of a ride truly changes the “silly season” landscape. He’s one of the highest potential young drivers in NASCAR. At this time JGR views Bell as the much stronger option for the No. 20 machine. That has officially put Erik Jones out of a ride, who would make sense in a number of places. He could be a fit with the No. 48. He could also go to Stewart-Haas if a ride opens there. That could then jeopardize the future of either Clint Bowyer or Aric Almirola. So, it’s safe to say that Bell losing his ride and joining Joe Gibbs just changed EVERYTHING.

Nathan Solomon: Christopher Bell wasn’t on the market for very long as, within days of LFR’s announced shut-down, Erik Jones was dumped for him. So now Jones is the free agent looking for a new ride. All the same options I mentioned ion the previous question are still on the table. There’s an opening at Hendrick and an opening at Stewart Haas. Additionally, the No. 42 will be vacant for Chip Ganassi, and that could be another option for Jones. I think a lot in “silly season” now depends on whether Clint Bowyer will get offered an extension for Stewart-Haas.

Turn 3: Keselowski’s return to Penske assured he will NOT take over the No. 48. So the question is…who will?

In some ways, Gragson’s potential ascension to the Cup Series mimics that of Keselowski’s…a talented driver at multiple levels whose aggressive racing style might rub some guys the wrong way (just ask Harrison Burton after the Xfinity Series event at Kentucky this year) but has the potential to impress both Rick Hendrick and Dale Earnhardt Jr. while piloting a car for JR Motorsports. Gragson has certainly posted results worthy of a Cup ride. He was the runner-up in 2018’s Truck Series ledger (racing a Toyota owned by Kyle Busch) and has been a premier name on the Xfinity level with wins at Daytona and Bristol this season. A fiery rookie may be the ultimate counter to the mild-mannered, stoic Johnson, but such a contrast would be one of 2021’s most intriguing storylines.

Dylan Price: All signs now point to Erik Jones. who’s now out of a ride. I love Erik as a racer and I think he would fit well within the current trio at Hendrick Motorsports. I think he also is the kind of high potential driver that Rick and Jeff Gordon (who owns part of the 48) would really want within the organization.

With that said, I don’t think he should drive the No. 48 car. I think the car should switch back to No. 5 for Jones. Still, nothing is for certain and a guy like Matt DiBenedetto or Kyle Larson could be a surprise hire.

Nathan Solomon: There are a few options on who could drive the No. 48 next year. Erik Jones is the newest free agent, and with his time at Gibbs, I could see him driving that car. Clint Bowyer is also a free agent, but I don’t really see him driving for Hendrick, especially with his age.

The other option could be to turn to one of the guys at JR Motorsports such as Noah Gragson or Justin Allgaier. There’s also a pair of guys driving for Kaulig Racing in Justin Haley and Ross Chastain who would love an opportunity in a Cup Series car that has a chance to win every week.

Turn 4: NASCAR has instituted some new changes, including new starting lineup and restart policies as we approach the playoffs. Thoughts?

Geoff Magliocchetti: While I disagree with the full-time “choose cone” being instituted at this stage of the season (the start of 2021 would’ve been more optimal), I’m eager to see how it plays out over these crucial final stages of the season. The All-Star Race was a good place to introduce it, but we didn’t get to see it truly go into action, to see a driver pick up several spots by choosing the lesser popular lane. Such a strategy could be the ultimate difference between advancement and elimination in the playoff chases this fall.

As for the lineup, consisting of a weighted system of standings and finishing positions/top speeds from the prior event, it’s great to see some welcome unpredictability added to the opening gride while ensuring that the best cars get the optimal starting position.

Dylan Price: I think it’s the right move. It really makes sense to do in my opinion in terms of adding value to the races. As seen in the All-Star Race, it makes for much more exciting restarts and incites much more competitive racing. To put it in NASCAR’s Senior Vice President of Competition Scott Miller’s own words, the sport “felt it was an important addition to the restart procedure”.

Nathan Solomon: I really enjoyed the choose cone rule used in the All-Star Race, and I’m glad it’s being adapted in most races. It allows the driver to choose where they think is the best for them and their car, not just the traditional way of odd position numbers start inside and even numbers start on the outside, It adds more strategy, and potentially on-the-fly thinking. It will make the racing better and pit road safer, as drivers will be less likely to play games on pit road to jockey for starting positions. Kudos to guys like Austin Dillon who pushed to get this added to NASCAR.