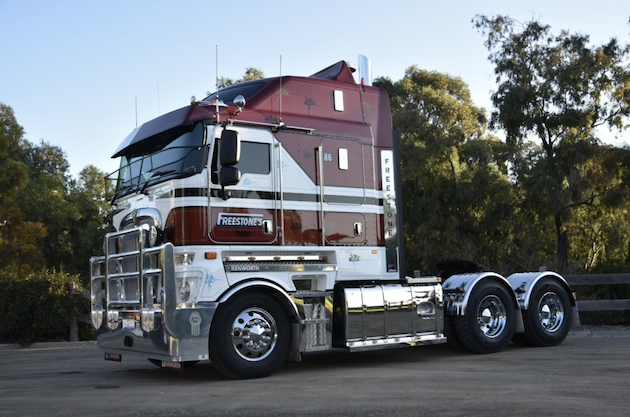 The first five were delivered in May with the remainder expected to progressively join the fold in the second half of the year.

This brings the total to a dozen as two new K200s were acquired by the company last year.

The new units have received custom paintwork in the classic Freestones colours of maroon, white and black.

“We added a number of custom touches including stainless-steel wrapping of the fuel tanks and either stainless-steel or maroon-painted windscreen drop visors,” said Keohane.

“They also have a ‘dummy’ stack that is actually a water tank. We wanted the classic twin stack look but only one is the exhaust stack.”

Running gear is as conventional as they come with 550hp/1,850lbft Cummins X15 powerplants and 18-speed manual RoadRanger transmissions feeding into air-suspended Meritor diffs with a ratio of 3.73:1.

Power gets to the ground via Superchrome wheels shod with Michelin tyres, while stainless-steel front wheel arch flares and skirt lights below the fuel tanks complete the picture.

Mirror polished Kentweld bull bars have the Kenworth ‘bug’ and K200 insignia etched into each side, harmonising with the ‘Freestones’ letters laser cut into the vertical stainless-steel cab extender adornments at the rear.

Other features include a wheelbase of 4,500mm, double-skin chassis rails and a gross combination mass (GCM) rating of 97 tonnes.

The ‘big cab’ interiors are trimmed in maroon ‘diamond pleat’ buttoned upholstery and feature single mattresses which provide more room for the driver to stand and move around in the cab.

They have CustomAir cab air conditioners that are mounted at the rear between the chassis rails and powered by Kubota diesel engines.

Keohane acknowledged the expertise of a number of companies that helped make these K200s among the most stunning on Australia’s highways.

“The stainless-steel fuel tank wrap and other details were done by RC Metalcraft at Albury and Premium Truck Refinishing in Melbourne did an awesome job of applying the colour scheme to the cabs,” said Keohane.

“TFI Group applied a 3M clear vinyl wrap to the front of the cabs to protect the paintwork from stone chips and make it easier for the drivers to keep them clean.”

He added that Freestones has a one-driver one-truck policy and that each of the drivers takes immense pride in keeping the trucks in gleaming condition.